The United Kingdom voted in favor of secession from the European Union – according to the results of the vote count, released a few minutes ago.

First the victory of the Brexit vote was reported by leading British media on the basis of surveys and exit polls, and then the result was officially announced.

This message immediately hit global markets, and Reuters news agency has called it a major blow to attempts at unification in Europe since the Second World War.

The British decision will be the start of a complex two-year process of “oversight” under the European Union and would be the strongest test of strength for Prime Minister David Cameron [who, since the first publishing of this article, has resigned – ed] has strongly advocated the preservation of Britain in the block.

British sympathy for the EU was not influenced by the agitation on the part of Cameron or the recent visit of Barack Obama .

The euro is also responsive to the results of the referendum, down 3.5% against the US dollar, amid fears that Brexit will have a negative impact on the EU economy as a whole.

It’s official. The UK has voted to #Leave the European Unionhttp://bbc.in/28UlJHk  #Brexit http://snpy.tv/28WDTHc 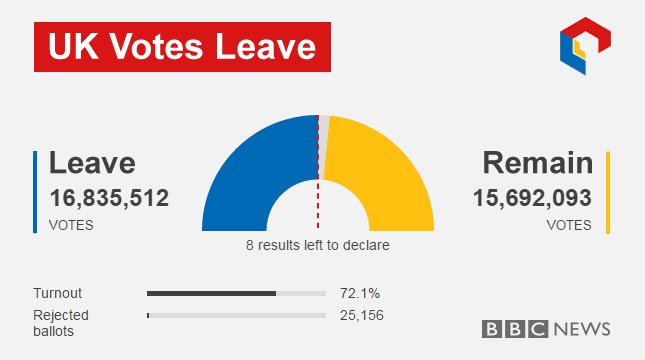