Littlehirosima: About the best and the rest

Last summer we met this young guy, Lyosha, at the hospice. Lower part of his body is paralyzed and, since he lived alone, he could not take care of himself. So, even before the war, he was admitted to the retirement home in Rovenki. We were shocked when we met him. He seemed like an alien there, out of place. A young guy – surrounded by the elderly with dementia, in a retirememnt home smelling of urine. I didn’t even know that disabled adults who can’t be independent and have no one to help are sent to such institutions.
Back then, I decided to get Lyosha a computer. Our readers donated three of them! Three! We brought one to Lyosha, and another we gave to Vova, whose mom died of cancer.

The third, a Mac from our Zhenya Birman, waited and waited. We couldn’t find a suitable recipient. Until we met Ira’s family from Vergunka.

I published Zhenya’s report on this family from Vergunka about a week ago. Ira and her two kids were abandoned by her husband. During the shelling in summer 2014, her house was badly damaged. When Katya left to wait out the the shelling, her home was thoroughly looted, down to forks and spoons. Alas, it happens. 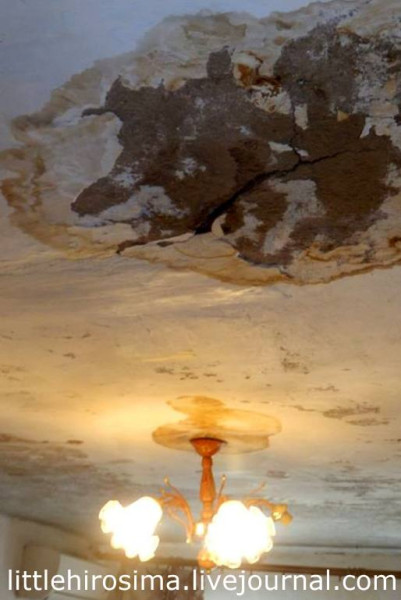 Zhenya wrote a report:
“We really took a liking to this family because of their modesty. The mother never asked for anything from anyone. We received their address from the Lugansk Social Welfare Center, and the inspector girl found out about them from the street coordinator. Through that, they at least received some construction materials… They never asked anyone for any help, even though they returned to a half-destroyed home completely stripped by looters. The neighbors, on their own initiative, helped re-assemble the ruined walls from whatever was at hand. They were only on the aid list because the village coordinator put them there.

Ira (the mom) keeps saying “I worked at the paint shop for 15 years, I’m used to taking care of myself.” Every time we visit she is embarrassed: “Guys, this is awkward, surely there are more needy people out there.” And who would that be??? She’s on her own, no relatives (apart from the elderly mother who needs help herself), the husband ran away as soon as the shooting began (Ira grimly called him a ‘coward’). 3720 rubles for three people–that’s their whole monthly income (~$55 – ed.).” 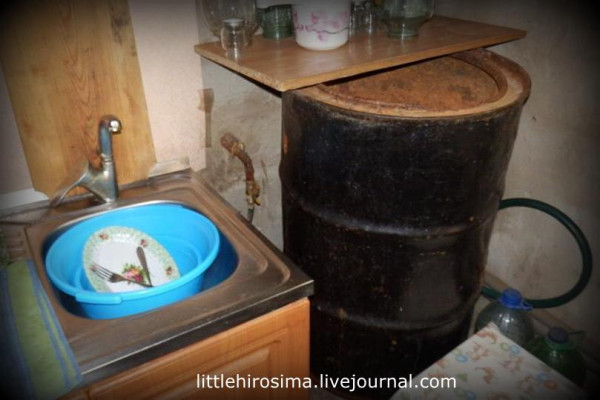 “We also like them because of their unwavering optimism. They don’t whine or complain. And their house is SO welcoming, despite all that happened…
They needed practically everything. Clothes for the kids, cutlery, plates, blankets, etc. Just imagine a totally emptied, half-destroyed house with blown-out windows…That’s what they found after the shelling stopped.
They get water twice a week. It’s collected into an old oil drum and two-liter plastic bottles. They have no other containers.
We brought them dishes, tableware, etc.”

The frying pans, plates, silverware and mixers are a whole separate story. Last winter, multiple sets were donated by my schoolmate Natasha. All of that was moved to the basement of Zhenya and Lena’s house in Lugansk. They are gradually distributing it to whoever needs it most, people who have found themselves in situations like Ira’s family. They’ve given almost all of it away by now.Natasha, you can see how needed these items were. Thank you. 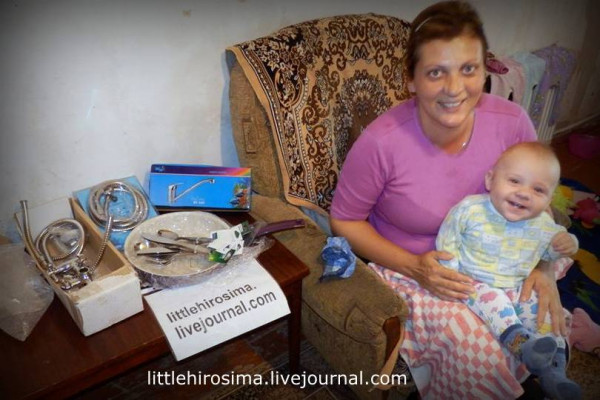 “For the daughter, we brought a beautiful red dress, a coat, a jacket…And…(drumroll, please!) a Laptop. The girl used to have a computer before the war, Ira bought it on credit. It was stolen by the looters together with everything else. One must say that the girl was seriously affected by all the shelling, the return to a half-destroyed house, the teasing in school by a couple of idiots who call her a “bum” because of the clothing that’s now too small and old. The computer and other things really helped lift her spirits.”

People commenting to the previous post about this family were amazed by such cruelty during wartime – how can people laugh?
All I can say is – war is simply a part of life for them. Harsh and cruel reality. They grew accustomed to it, stopped noticing it. To my own horror, when I am there I am also no longer noticing many things. Things which before used to make my hands shake and tears roll.
People in general are cruel, and the war only hardens their hearts even more.
Not everyone, of course. But those who were cruel beforehand became more so afterwards.
War reveals who you are, on the inside. It accentuates both your strong and weak sides. Therefore during a war it becomes clear what everyone’s worth is.
Everything that the existentialists (dammit, is that how it’s spelled?) wrote at the beginning of the last century turned out to be true – a man’s true nature comes out in extreme situations.
On the other hand, we can also see who the best people are )))) 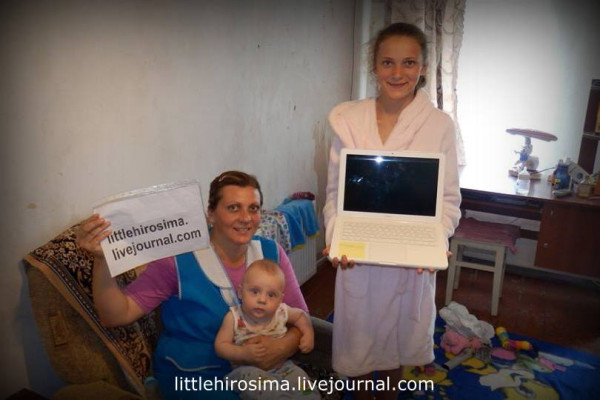 Natasha, Zhenya, the Lugansk Zhenya and Lena, many thanks to you!
And thanks to all who participated.
You should know you are the best ones!

We’ll soon come by with more aid.
Zhenya cleverly recorded a video of how he delivered the computer (added English subtitles – ed.):

Dunya (Littlehirosima) tells me she’s headed to the Donbass again this week. Help her out if you can, or wish her luck at least.

Also, here is her Humanitarian Aid FAQ – check it out if you’re thinking of ways to help.