The streets of the wartime city are full of kids and youth.
The sun is blazing, though the exhausting steppe heat has not yet set in.
I go:
–Rus, Rus, look! Are they fixing up the church?
–And what’s this?
I twist and turn in the car like a beetle, Ruslan gives amused answers as if I were asking him about something strange.

Not many people simply walking around on Sunday. Some are tending to their private gardens, some are at home with families.
In the center, under the Lenin monument, the pile of shell fragments is slowly shrinking – apparently someone is carrying them off.
There city proper has not been shelled for almost a year.
There’s uninterrupted explosions around the outskirts, though. Kalinovo,
Molodezhnoye, Novoaleksandrovka, and other villages are still in the
line of fire. –Let’s go to our city park. You’ll see what they built there.

The park is drowning in greenery like the rest of the Donbass, on the eve of a hot summer which will dry it all up.

There is a new playground which is full of kids. A girl sitting on a toy car laughs and says to us:
–Nice playground, but they forgot a bench.
Ruslan smiles:
–No big deal, we’ll make one. 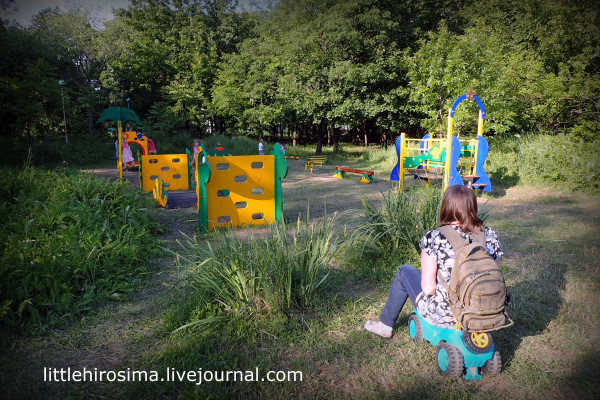 The city is building itself back up. There are kindergartens, schools are graduating students.
Houses are being rebuilt, apartments are getting new windows.

Many people are unhappy their turn hasn’t come yet.
But the first buildings to be rebuilt are the big apartment blocks. Private homes receive only construction materials.

When you read that Alchevsk had 400 houses damaged, you can’t believe
it, because the city looks untouched. Few shells or rockets landed within city limits. Then you realize that “damaged” can also mean shattered windows.

There isn’t a
single house in Pervomaysk that’s undamaged. Hundreds of houses had
entire apartments burnt out. Dozens were utterly destroyed, to the
foundations, or had entire sections collapse. The house in the first photo is missing a whole large section on the right side – it was dismantled due to being too damaged to rebuild. 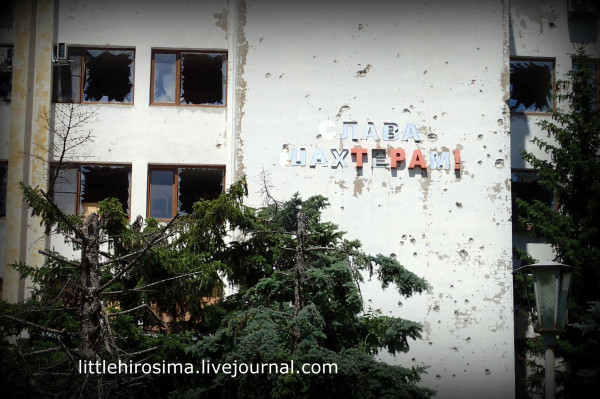 We keep walking and my jaw drops. There is a working fountain in the park.
–How? Your water supply hasn’t been restored yet!

The city was without water for over a year–it was distributed into
containers, building by building. Last summer the Ukrainian army
destroyed Pervomaysk’s water supply system. We played our small part in
restoring it.

–Our youth organization fixed it. They put on their rubber boots and cleaned everything up. Water is now available once every two days, between 5 pm and 8 pm hours. It’s available less often in some outlying areas. Some LPR
cities and towns get water only once a week.
The Pervomaysk fountain works only during the weekends, and has its own recycled water supply.
You can find empty bottles in every apartment, house, and stairwell. People have adapted. Ukraine shut down gas supply for the city about a month ago, after our visit here in April.
But the city administration responded immediately and a couple of days later gas was available again.
They laid the pipes all the way from Irmino.
City government is doing the best it can even though the situation is still very difficult.

Even though it’s been quiet and no people have been killed for a while, everyone understands what is happening.
Some people still prefer to sleep in the cellars, which surprised me.
They are still afraid. –Heads or tails?
The Gukovo customs came up three times. Izvarino not even once.
–Let’s risk it.
The customs guy looks at the totally packed car and thunders:–Unload everything.
–What do you mean, everything? The car is full!
–Everything means everything, miss.
My hands start to shake, and the asphalt around the car is gradually covered with packed bags. But half the car is still filled – with liquid food for the very sick, who can’t eat solid foods.
–Got a packing list?–Are you serious?!?!?!

Incidentally, nearly all of the boxes and bags also have bottles at the bottom, covered up with baby clothes and such. There is a lot of liquid food. The car us groaning under the weight.
It’s food for the really sick, sent by Lena Filippova. The expiration date is in September, therefore they took a risk in getting it across the border.
Izvarino almost never inspected us closely. We were always lucky. But the waiting time there is now several hours, a long line of vehicles is awaiting clearance. [So we went with Gukovo].

So now all the car’s contents are on the asphalt, the insides have been searched, everything checked with metal detectors. The customs and border guard officials are walking around all the stuff, poking it with their fingers.

–What’s this? Unpack it. And this?
The customs officer takes out a rubber doll and a child’s sweater, uncovering 10 bottles underneath. I pre-empt him:
–Each of these bottles costs 450 rubles! [$7 – ed.] And in LPR they are even more expensive, and people don’t have money for them.–So maybe they should buy something else?Here I get angry:–They can’t eat something else!
Nearly all this food is for the girl Vika, for whom it’s a matter of life and death. Each bottle represents a meal. She can’t eat anything else. The family doesn’t have the money. My voice cracking, I look for the package with feeding probes and syringes to show him what I’m talking about. A wheelchair is right next to it. The customs officer acquiesces.
–Fine. What’s this? Also food?–Well, yes.–Are you carrying medicines, painkillers, and prescription drugs?–Of course not!

My voice did not waver–just before our visit, both Zhenya and I had a range of debilitating illnesses. Being very conscientious and having faith in the miracle-working power of modern medicine, we accidentally took drugs along by the bag. Just in case. You never know what might happen in a warzone. And if you don’t need it, someone else might. Right?
The medicines were also at the bottom, under diapers and clothes.

The customs officer approached each of the packets while my heart kept descending into my stomach.

About a year ago Lera, a girl we know, donated a pile of new shirts and pants. Still in factory packaging. It was impossible to take them across in a single trip. We’ve taking a few on every trip since then. They have almost become a symbol of our visits.

Zhenya suspects they multiply by cell division in his garage, since the pile doesn’t seem to be diminishing. –Why so many of them?
The shirts were pressed into food parcels. They were coming out of all nooks and crannies, and they looked even more dubious next to the bottles.
–If you want, we can leave them with you.
–Fine, you can go.


The rest of the stuff was not inspected.

I don’t know whether we were saved by the shirts, or the coin coming up heads three times in a row, but “the spy was never this close to a being discovered”.

Dear Donbass, we are back. From Littlehirosima: If you want to join us in helping the people of Donbass, write me in person through LiveJournal, facebook, Paypal ([email protected]) or email [email protected]