This July trip was not supposed to happen.
Zhenya was buried under a pile of work, my daughter is graduating from first grade, there’s book editing, my students have exams…
But we managed to get away, though not for long. But it was productive.
The situation was difficult – daily reports of DPR roads being shelled meant that the guys refused to take me there, and we only distributed aid in LPR. Unlike our previous trips, there was more traffic on roads – we encountered tanks and APCs almost everywhere we went. 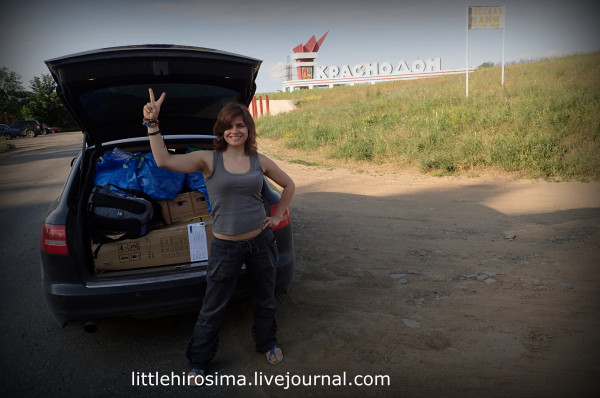 For the thousandth time, I need to thank our super-team:
– Zhenya and Lena from Lugansk, who actually end up distributing most of the aid. They are the ones whom the people actually come to for help, and by now there is a constant stream of those who have nowhere else to turn. Lena, is amazing at bookkeeping, with her perfect memory, and also her pancake and borshch making skills ))) By now, the Lugansk Zhenya isn’t just someone who’s helping us, but is also our navigator, advisor, and close friend )

The Moscow Zhenya says every time that he can’t go on the next trip becau0se he’s too busy with work, but nevertheless has never missed a single trip. And every time he tortures his luckless Audi with long-distance drives.
I’d like to make a separate note about cars. In addition to the luckless Audi, in Lugansk there lives Zhenya’s little van, which has been distributing aid for the whole war. It’s feeling worse with every passing month. Its clutch release cable broke at least five times in the last two months. Something is constantly falling off, breaking off, the roads are killing the suspension, and it is gradually reaching the end of its days. But since Zhenya has no other car, so that’s how we deliver aid. The van recently had tools stolen because Zhenya, out of habit, did not lock it. He stopped locking the car when the war started, and this is the first time in two years that something was stolen. Therefore I wanted to add–if you want to help our wounded van, please send money with a note “car.” I want to say thanks to Lena Zhukova, Tanya Anikina, Sasha Shashkova, Aleksey Kovinskiy, Sergey Beglov for helping out in Moscow. Thanks to Anastasiya for the food, catheters, and syringes for Vika Bespalykh.
Thanks to Sasha Klochkov for a big load of food and baby diapers, which Lugansk Zhenya already began to distribute.
Separate thanks to Denis Semyonov for his help in ordering and compiling lists of medicines for the inhabitants of Pervomaysk.
Thanks to Mikhail Yasinskiy, who is scrupulously translating these posts into English which you can then read on our new site, english.littlehirosima.com.

Thanks to Tatzhit for publishing the translations at FortRuss.
Thanks to all who donated clothes, wheelchairs, food, toys.
I would be glad to list everyone, but that would be difficult since many donors appeared de-facto incognito. Thanks to all who regularly make money transfers and those who visited these pages for the first time and believed in us. Thanks to the foreigners who, not knowing the Russian language at all, are feeling the Donbass’ tragedy.Our team consists of all of you.
Thanks to everyone who is supporting us with your words, comments, and letters. People who worry, make reposts–I see  them all and, you should know, this is very important to our work. It’s difficult to convey the emotions I experience when I receive a letter, which generates a great deal of strength and desire to help. Receipts. All photos are clickable. Receipts for Vika Zozulina are published separately in posts relevant to her.

We managed to accomplish a great deal, despite having little time.

We delivered cleaning and hygiene supplies to the “Spas” Stakhanov Rehab Center.

Delivered cleaning supplies and food to the LPR’s Center for Social and Psychological Rehabilitation of Children.

Delivered diapers, cleaning supplies, and shirts to the Novosvetlovka hospice.

Helped the radiation therapy department of the oncology ward at the Lugansk Republic Hospital by providing it with a wheelchair and cleaning supplies.

Helped the Lugansk Oncology Hospice with diapers and cleaning supplies and a wheelchair.

Delivered clothes, diapers, and food to Vergunka, for Irina and her kids.

Helped with anti-seizure preparations, food, diapers, and a wheelchair for Otabek, a disabled child, from Lugansk.

Visited our Seryozha Kutsenko at the retirement home and brought him treats.

Brought diapers, baby food, and a special child wheelchair from Alchevsk for Lena and her children Stanislav and Anzhelika, who is disabled, from Lugansk. 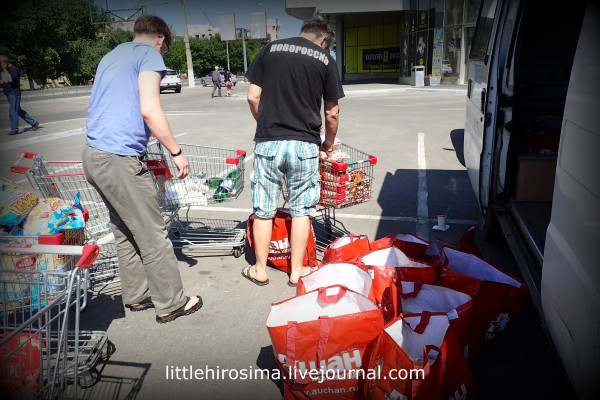 As always,we went to Pervomaysk which by now has become practically a hometown, and which is on the front line.
It’s been rather quiet there for the past year.
Recently the shelling has increased, and the situation has grown more tense.
The city is being rebuilt–the gas and water pipes have been repaired, water is now being delivered nearly constantly to most of the city. The multistory apartment buildings are having windows put in, stairwells are being fixed up.
We delivered medicines to those in the city who need them, and Ruslan Dorofeyev, our friend, distributes them in accordance with lists. We delivered food packets to the needy families in the city.
Helped with a walker for Olga Ivanovna Otroshchenko, and also helped her find her son from Magadan.

I haven’t written about all the families, so here’s the summary report:

This is Vladimir Albinovich Torgonskiy. We helped him last summer, too. He lost his arm during shelling in 2014. His wife was killed then. We delivered a wheelchair to Mikhail Abramovich Dolzhenko from Pervomaysk, a veteran of the Great Patriotic War. During the winter, he’s had a foot amputated due to diabetes. Before we arrived, he had to more around by crawling. We delivered 5 thousand rubles from Nikolai to Valentina Vladimirovna Varvaryuk, who is raising her grandson Artyom on her own. 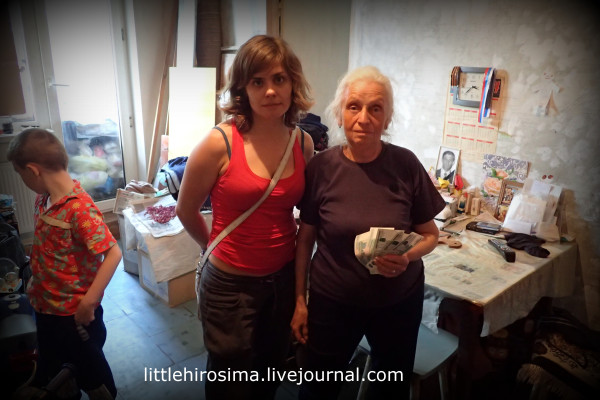 We helped Valentina Borisovna from Pervomaysk, whose son-in-law was wounded on August 11, 2014. 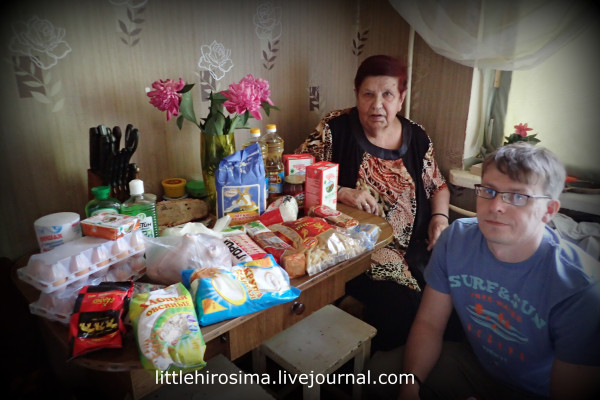 We helped Maria Pavlovna Fladun, who was wounded in Pervomaysk in August 2014. She lives alone, her daughter has long been on the other side, in Severodonetsk. Maria Pavlovna works in a library.

We are also constantly helping Vika Zozulina, who is now at a TB ward in Moscow, whom we transferred out of Lugansk thanks to Irina Bednova (Batman’s widow – ed.) to have her eyes treated.


As stated above, we are continuing to help some families from afar, you can read about those families here.

And here are some more people we helped; I hope to write separate reports about them soon.

This family is in a difficult situation. A single mother. Son Dima (to the left) was a dancer before the war. He received shrapnel wounds to both legs, has been limping ever since and now walks like a 90-year-old. The mother suffered the onset of osteoporosis since the war began, her hip joints are now in terrible shape. She’s not yet classified as disabled, therefore they are surviving off other tiny benefits. 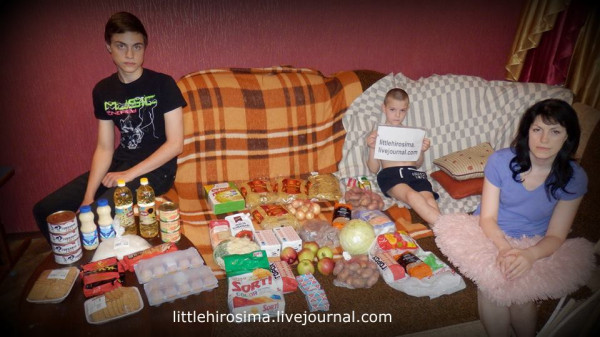 Below is Yana, a 29-year-old woman with many children. She lives in Lugansk. A very difficult situation – judging by her face and what the neighbors said, according to Lugansk Zhenya, the husband did not simply beat her, but pummeled her until she had scars. He’s since left, and they are surviving on their own. … 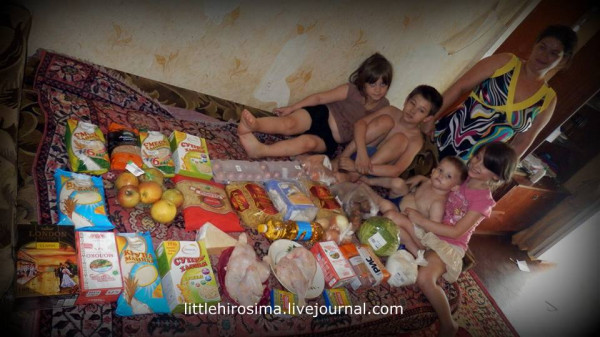 Marina with five kids is a single mom. The husband chased her out of their apartment in Krasnodon. She is now staying with her brother in Lugansk. He’s in the militia and is supporting the whole family. Her mother and father died in the last six months. 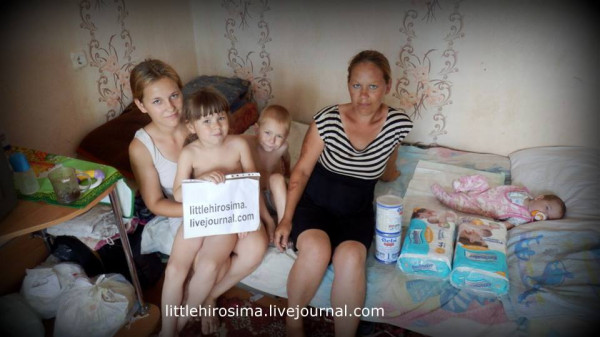 These are our certificates of appreciation.
If you haven’t gotten tired of reading yet and actually reached the end, I want to thank you one more time!
I’ve been writing the whole day and I am ready to drop.
But reading the aid reports requires a special kind of heroism) 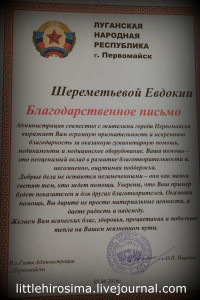 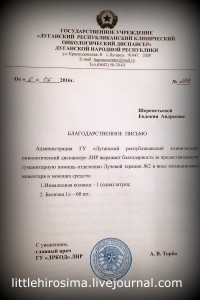 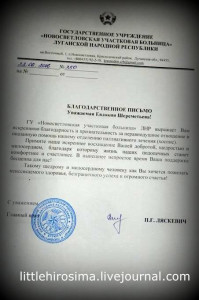 Ukraine in the Eternal Struggle of Light and Darkness