Originally translated by J.Hawk and published at the english.littlehirosima.com blog

Do you know that strange feeling when everyone around you is discussing latest soccer game, or some sick person being pardoned, and you don’t know what to say? People discuss the latest “heinous murder” on TV, or allegations of corruption against some official or other, and you keep droning on and on, like a broken record. You become an irritating fly, a nuisance whom everyone has been trying to filter out.

–Ah, is she the one who only posts about the old people on the Donbass?

Yes, that’s me. I feel like a broken record, and I don’t know how to write about these things in any other way.

I see that the number of views on posts about Donbass is lower than ever. Even my photos of eggplants were more popular. My blog has detailed statistics…

Donbass has totally vanished from the news, blogs, internet, and every place else. It’s not because people are tired and fed up – that happened over a year ago.

They simply got used to it. They got used to it and it became a part of contemporary world. Like the hungry children in Africa, Afghanistan, or terrorism in the Middle East…

But here I go again…
For example, how should I write about this woman? She’s pleasant, giggly. As we were leaving, she was trying to feed us, even though we just brought food aid for her…
Her name is Tatyana Vasilyevna, and she has a funny last name of Sladkaya [Sweet].
On the photo she’s shown in her Pervomaysk home, which suffered two direct hits.
After the first one, on June 27, 2014, her tool shed was completely destroyed. Tatyana Vasilyevna barely made it to the bomb shelter. The main door of her house was destroyed, all the windows blown out. 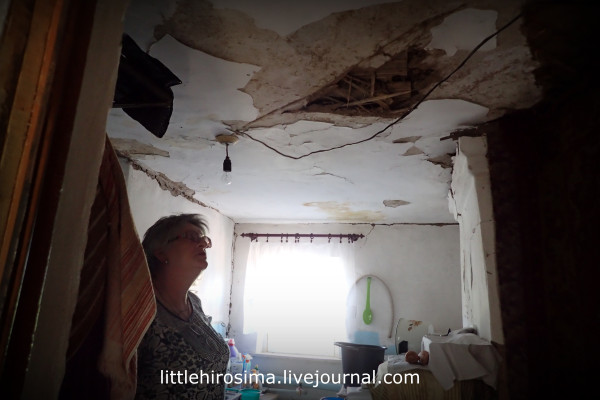 The second direct hit came during the winter, on the night of January 18th, 2015.
–Thank God I was sleeping in the bomb shelter. It hit the bedroom, after all…

This is Nina Petrovna Senko in her room. Also in Pervomaysk.
On August 19, 2014, a shell landed right next to that wall in the picture. 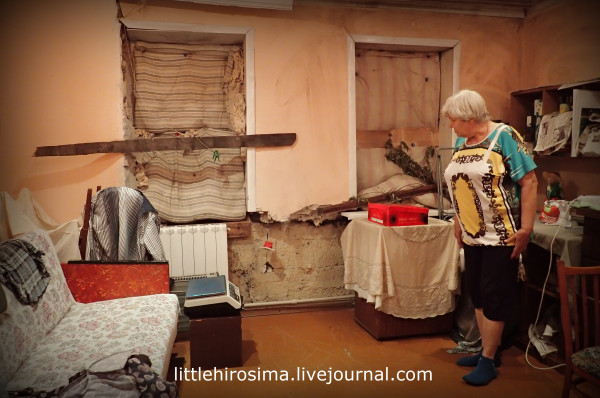 Now the spot where the shell landed is overgrown with flowers, while the breach in the wall was patched up, as you can see.
Her husband was home at the time, but managed to escape to the cellar when the shelling began.
The militia evacuated her to Stakhanov.
Volunteers later took her to Kharkov, helped buy tickets.
When Nina Petrovna speaks, her voice quickly falters, as if she is experiencing it all over again. This apartment belongs to Nadezhda Vasilyevna Kravchenko in Pervomaysk.
While she was away, in August 4 her home, specifically her bathroom, was struck by a Grad rocket.
All the windows shattered.
The glass was replaced, but the hole in the ceiling is still gaping. 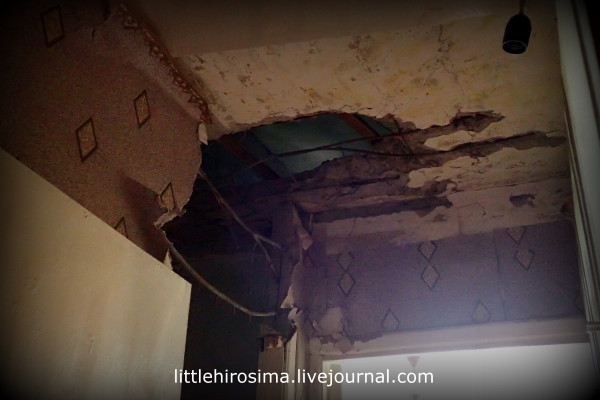 So she lives with broken ceiling and bathroom. So how many damaged houses are there? In Pervomaysk alone, over 600!
SIX HUNDRED!!!
I’m getting sick of writing about it.
But you know, I haven’t gotten used to it all.
I can’t get used to it. If you want to join in helping the people of the Donbass, write to me in person through LiveJournal, facebook, email to [email protected], or Paypal to
[email protected]

Will justice ever be served? Polish MoD calls Volyn genocide a “Russian manipulation”