Littlehirosima: I haven’t cried like that in a year and a half

I haven’t cried like that in a year and a half.
It was a story that made everyone cry.
We drove up to the gate, and Lyuba, a local woman, came out and started to howl. She simply howled and cried, resting on her cane.
Her husband was blown to bits right before her eyes in August 2014. In front of that very same house where she was meeting us. He stood where we were standing now. Six shells very close.
And then her son called from Lvov and told her not to call anymore. 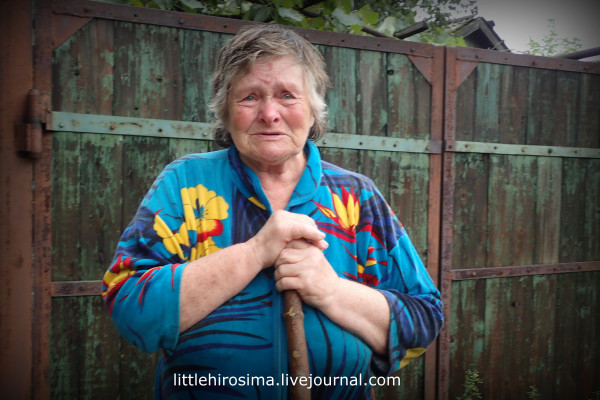 –The old man and I ran to the bomb shelter. Shells were falling around here. And he was torn apart right before my eyes. It’s been two years. Every time I come out here, I scream. There was also a boy. I told him, run, we have a cellar, it’s safe there. He was blown apart. Only his small legs remained.
–A little boy?
–No honey, he was about 13. Just a kid. I hope they punish these banderites. What gave them the right to smash my Donbass like this? How many people they killed? Our troops came over, said that my husband was number 910 and the kid number 911. I am a WWII veteran and a decorated worker, I am 84 years old. I longer have anything to live for, honey.

And then everything was in a fog. My knees buckled, and Lugansk Zhenya went to the car. We took out the humanitarian aid and laid it out outside – the house was too dark. Then I blabbed something out about her children.

Ruslan clarifies:
–Where’s he? In Ukraine?
–In L’vov region.

Since then he hasn’t called once.
I turned on the camera and turned away. All the guys ran away, both Lyosha and Zhenya. And Rusik.
I stand in front of her alone, and she looks into my eyes.
She’s calling me “daughter”. The look in her eyes can’t be described.
I’m desperately looking for money in my pockets and I pushing it into her hands. She grabbed me by the neck, drew me closer, and began to cry uncontrollably. She’s a small woman, about my height.
At this point I broke down too.
So we are standing together and crying. Dogs around us barking like mad.
Nobody could stop. 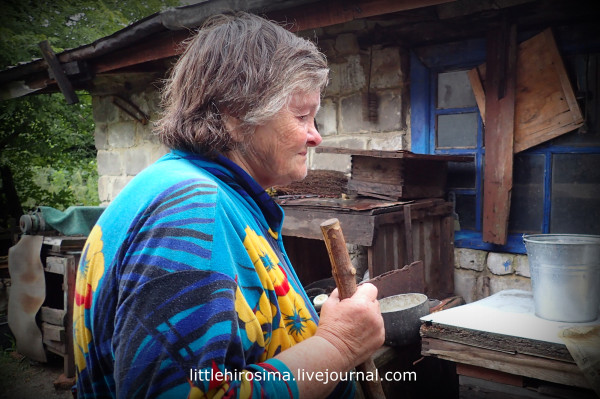 And when we went out the gate to the car, she quietly asked the guys:
– Darlings, what’s Russia thinking about us? Our dear Russia?
Lyosha could only say:
–Granny, Russia’s with you. Lyubov Nikolayevna Belyavtseva, age 84. She lives in the frontline city of Pervomaysk, in the unrecognized Lugansk People’s Republic. She has sugar diabetes and she spends all of her tiny pension on medicines. Her son is named Dmitriy Tikhonovich Shestakov, born in 1966. I know his current address. I wanted to publish it so that everyone would know. But that’s her son, after all.

Putin vs. McCain – which is the dictator? [Video]

Five Minutes of Common Sense: WADA might have won the battle, but will lose the war