– By Eduard Popov for Fort Russ – translated by J. Arnoldski

Left: Vladimir Makarchuk/Right: a demonstration by the neo-Nazi Svoboda party in Kiev

In my article “The Latest Trends of Modern Ukrainian Nationalism” published in an academic journal in 2010, I identified two strata and generational varieties of this phenomenon, old and new Ukrainian “nationalism.” The first or “old” nationalism is predominantly Galician (from Lvov and other Galician provinces). This ideology is based on the “classics” of pre-war Ukrainian nationalism or, more precisely, the neo-Nazism developed mainly by Dmytro Dontsov. 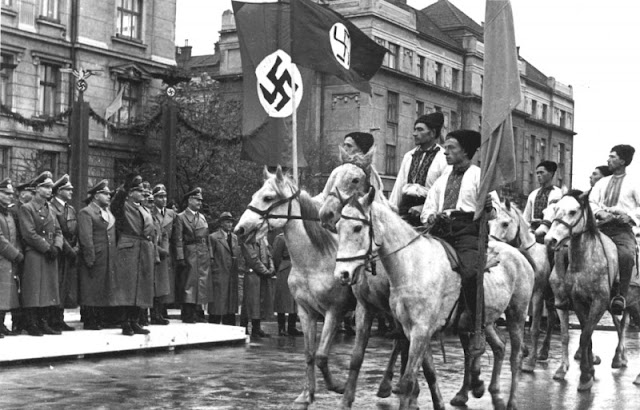 In political terms, this variety of Ukrainian neo-Nazism is traced back mainly to the Banderite faction of the Organization of Ukrainian Nationalists and especially the emigre OUN and Congress of Ukrainian Nationalists party. This group also includes the modern Ukrainian Svoboda party which prefers to call itself an association or union rather than a party. Svoboda was crystalized out of the Social-National Party of Ukraine whose ideology was “National Socialism,” which featured a direct appeal to the experience of its ideological and political role model: Hitler’s NSDAP. In order to avoid accusations of Nazism and too blatant flirting with National Socialism, part of the SNPU party elite headed by Oleg Tyagnibok created the Svoboda party whose ideology was declared to be “National Democratism.”

The other founder of the SNPU, Andrey Parubiy, is currently the head of the Verkhovna Rada (parliament) of Ukraine. He became famous as the commandant of the Euromaidan and as the executioner of Odessa on May 2nd, 2014.

All of these and a number of other political forces are the heirs of the Banderite tradition of Ukrainian neo-Nazism.

On the other hand, there are the Melnykites, the Banderites’ competitors from the OUN-M who profess the idea of “united Ukraine,” or the unification of “ethnic Ukrainian lands” under the banner of a totalitarian government. An important role in these plans is played by Ukrainian communities in neighboring countries. They act in accordance with the traditions of Nazi Germany, as the Germans (and in this case, the Ukrainians) reclaimed the lands of their inhabitance for the Reich. Ukrainians and descendants of the Petlyurites and Banderites who fled to the West form compact communities in, for example, Canada, and actively promote this idea even though they do not consider Canada itself to be ethnic Ukrainian land worthy of joining to the “thousand-year Reich.”

Ukrainian communities in Russia are a subject deserving separate and detailed study. I’ve already written about the fact that Ukrainian ethnic identity is underdeveloped even today. Despite the efforts of Ukrainian neo-Nazism’s ideologues and the Soviet communists to form a Ukrainian people out of the Russian one, these initiatives have yielded only the most relative results. The vast majority of Ukrainian (Maloyrossiyan, “Little Russian”) immigrants to Great Russian or Cossack lands identify themselves as Russians, not Ukrainians. This is the biggest problem for Ukrainian nationalist propaganda in Russia.

In 2012, an employee of the Southern Scholarly Center of the Russian Academy of Science, Tatyana Hlynina, conducted a study entitled “The Ukrainian Diaspora in the Rostov Region: Mechanisms and Practices of Maintaining Ethnic Self-Consciousness.” Hlynina drew a rather disappointing conclusion for those wishing to ethnically mobilize Ukrainians: “A poor cohesion of the diaspora, the Russification of its young generation, and the weakness of its ethnic identity are all noticeable.”

Ukrainian organizations do not want to recognize this objective circumstance, namely, the Russian self-identity of the overwhelming majority of so-called Ukrainians (natives of Ukraine or people with Ukrainian, Little Russian, surnames). Their goal is to prove a high percentage of Ukrainians among the Russian population and within the country’s individual regions. The recent statement by Ukrainian Vice Prime Minister Kirilenko that “10 million” Ukrainians live in the Russian Federation served this aim. The higher the number of Ukrainians in Russia, the louder will sound demands to guarantee Ukrainians opportunities of “national-cultural autonomy” (at the first stage) and then territorial autonomy (the next step).

At the regional level, organizations in the Rostov region and Krasnodar land of Russia set the tasks for the Ukrainianization of the Southern region’s population. They have especially actively worked in this direction since the first “Orange Revolution” in 2004. In particular, at that time in Rostov-on-Don was born the Union of Ukrainians of the Rostov Region and the Rostov City Ukrainian National-Cultural Autonomy. The leader of the latter is the businessman Vladimir Makarchuk.

At a number of academic, public, and cultural events, Makarchuk has stated that the number of Ukrainians in the Rostov population is significantly understated. Allow me to quote my article from a few years back:

“The statements of Ukrainian organizations in the Rostov region are disproven by the official data of the 2002 census according to which the number of Ukrainians is 118,486 people (2.7%). A. Bolshakov (the leader of the Union of Ukrainians of the Rostov Region) and V. Makarchuk have proclaimed that the Ukrainian population of the region reaches 250,000 or even 40%. The method of artificially increasing the number of Ukrainians lies in automatically counting as Ukrainians those people with Ukrainian (Malorossiyan) surnames. This contradicts all known scientific methodologies of determining ethnocultural identity, including those accepted by EU countries where the main criterion is self-identification. Such statements have been made in the presence of officials of the Rostov regional administration but were not met with any rebuttal.”

In other words, they automatically record everyone with Ukrainian (Malorossiyan) surnames as Ukrainians. This strange methodology for ethnically distinguishing a population is something of a new word in ethnography. Then again, such makes sense considering that Makarchuk himself, despite decades of residence in Rostov-on-Don, has not learned proper Russian and is even proud of the fact that he speaks in “peasant” dialect (the everyday speech of an illiterate Ukrainian village).

But this is not all. According to them, the Don was originally colonized by Ukrainians, but Starocherkassk, (the second capital of the Don Cossacks) was actually founded by the Cherkasy (i.e., Zaporozhye Cossacks who have a complex ethnic and social background) whom they are trying to make into Ukrainians.

It is telling that Makarchuk has denied the data of the All-Russian Census, i.e., he has declared such to be falsified, in the presence of representatives of the Rostov Regional Administration, who did not even raise any objection.

It is naive to believe that figures in the likes of Makarchuk are concerned about the preservation of Ukrainian national culture. Rostov City Ukrainian National-Cultural Autonomy’s activities are distinctly political and nationalistic.

At a forum of the Svoboda party, an open letter from Makarchuk was published in which he sought protection from the neo-Nazis and asked them to publicly praise his activities.

Despite Makarchuk’s appeal to Ukrainian neo-Nazis, he was included in the Rostov Public Chamber as the leader of the Ukrainian community. As a result, his Rostov City Ukrainian National-Cultural Autonomy receives funding from the Rostov-on-Don city budget.


While the Russian population of Donbass is being subjected to genocide and activists of the Russian movement in Ukraine suffer from political repression, the fact that such an organization receives support from the Rostov regional government is, to say the least, bewildering.

An entire network of Ukrainian nationalist and neo-Nazi organizations, including underground ones, exists in the Kuban (Krasnodar Krai) as well. The “Ukrainians of Russia” organization of the Kuban Ukrainian movement’s V. Chumachenko, a fellow of the Free University in Munich, can be listed as one such. It is worth noting that the Free University in Munch was founded shortly after the Second World War by activists of the Banderite wing of Ukrainian emigration. Figures like Makarchuk and Chumachenko are closely linked to the General Consulate of Ukraine in Rostov-on-Don and the Ukrainian government. According to some reports, Chumachenko receives guidelines from Ukrainian state structures such as the SBU which are closely linked to Banderite organizations.

After the “Revolution of Dignity,” Ukraine quickly advanced a policy of genocide against the Russian and culturally-Russian population of Ukraine. In early August 2016, Ukraine went even further and embarked on a policy of sabotage and terrorist attacks against Russian territory.

The operations of such organizations as the Rostov City Ukrainian National-Cultural Autonomy, of course, are far from the saboteur and terrorist methods of struggle prevalent in Ukraine. But they are aimed at expanding the bridgehead of the “conscious” (nationalist) Ukrainian diaspora in Russia. The cultural and educational tasks of these organizations are in fact guided by political goals whose essence was clearly revealed in Makarchuk’s letter published at the forum of the Ukrainian neo-Nazi Svoboda party.

Turkey in Syria, the “FSA”, and the Battle for Syria’s Constitution

A Working Imitation of The Life-Size Model of Freedom