Translated by J. Hawk and originally published at the Littlehirosima-English website

Ira looks like a 16 year old, and she seemingly speaks ten thousand words per minute.

I couldn’t really keep up with the flow of her thoughts – she was speaking so fast.

Her house is in Stanitsa Luganskaya, on the “other” side. And as her brother is in the militia, there’s no going back.
Ira doesn’t let her son out of her hands, and keeps hugging him the whole time.

Ira is actually 24, even though she looks like a teenager holding a younger brother.

She met the boy’s father on the street, at a bus stop. He courted her for a long time, said he couldn’t live without her.

Doctors told Ira she could never have children.
So when she found out she was pregnant, her happiness knew no bounds. The doctors couldn’t believe it, either. 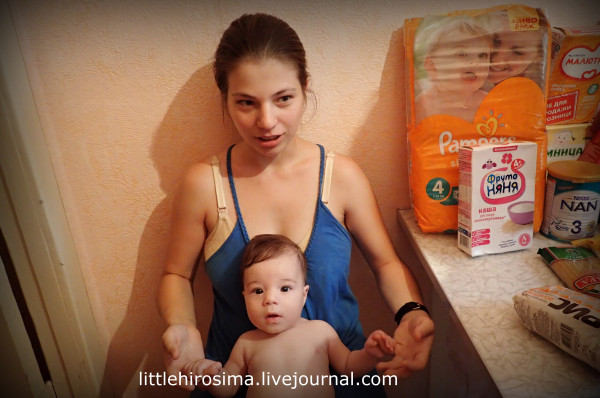 Ira doesn’t have a home, as it is now on the Ukrainian side. There is no possibility of going there, since her brother is a “separatist”.

She lives in an apartment in Lugansk rented for her by the brother. But the conditions are Spartan: no hot water, no boiler, no washing machine, nothing. But right now that’s not what’s most important.

While the boy is still so little, she can’t work because she has no place to leave him. She’s not used to that – she used to work all the time, often had more than one job – she was a cook.

She did not complain even once, and always had a smile from ear to ear. Although I used vulgar terms to describe the “father”, a few times. It seems that’s not important to her anymore.

You know, many write me–why do people have children there? For what?

But life goes on, with young girls learning in the midst of the war they can’t have kids. So for them there is no greater source of happiness than becoming mothers.

This horror has lasted for over two years already. But maternity wards are full, and one can see cars with wedding decor on the streets on weekends.

People are adopting from orphanages more often.
As if to spite the world.

Ira’s sole source of help right now is her brother, who has his own family and kids.

Our humanitarian aid. Thanks to all who participated! 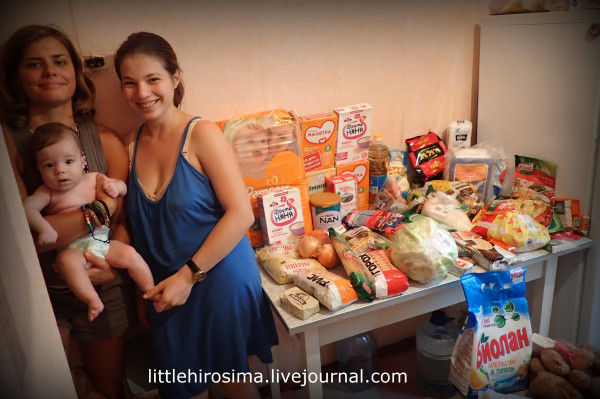 Reasons why Americans are moving to Russia