Dear friends, we have some unfortunate news concerning our Vika from Lugansk. Recently the pressure within her eye has increased and she has been hospitalized with glaucoma. She’s in extreme pain and is on painkillers. She was operated on yesterday, because the pain became unbearable.

As for the good news, we collected 45 thousand rubles ($700 – ed.) for medicine, which we already bought and delivered to her in Lugansk. 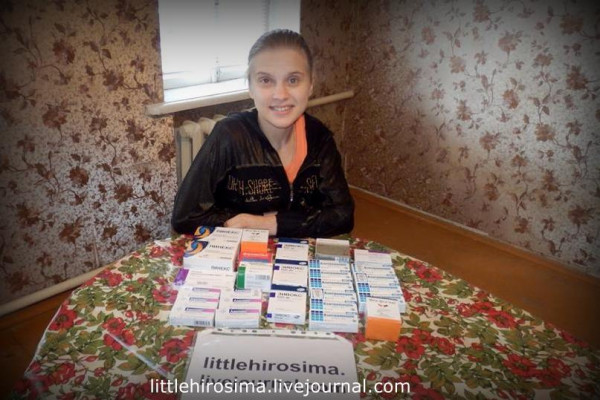 Viktoriya Zozulina is a girl from Lugansk suffering from diabetes, to the point of de-facto losing her sight. Shortly before her eyesight deteriorated, her brother died during winter of 2015, also from diabetes (wartime was bad for diabetics – ed.). This was a hard blow for her, and led to severe complications, including the loss of sight and of front teeth. We’ve been assisting her since May 2015. We’ve been constantly buying test strips, insulin, eyedrops, we bought Lutsentis which is quite expensive, we helped fix her teeth.
In January 2016, thanks to Irina Bednova, we brought her to Moscow where she was also diagnosed with TB. That’s why she couldn’t have an eye surgery. Her TB was treated for about six months, after which a part of her lung where the TB was concentrated was surgically removed. Doctors prescribed a lengthy course of medical treatment for her. But, unfortunately, nothing has helped her eyesight–nearly all the doctors say that there is no chance to restore it.

Vika is now at the local TB clinic. She was given some medications but not the most expensive and effective ones, unfortunately (for example, no Linezolid, which should be taken daily), and she will not be getting them in the future.

As of this month, we’ve managed to collect enough money to buy nearly everything she needs. But she’ll need these drugs every month, for a whole year. Which means, to our horror, a similar sum every month. The situation is both difficult and ambiguous. I am not a fairy godmother and, by and large, everything depends on you.

If you want to participate in helping Vika, make all financial donations specifically with a”Vika” tag. We keep a separate account for her.

Huge thanks to all who participate in helping her! Thanks to Tanya Anikina, Lena Zhukova, the Moscow Zhenya for helping Vika in Moscow. Thanks to everyone who writes to and helps the family. Thanks to Lena and Zhenya in Lugansk, who help them locally.

Vika is trying to get out of her predicament, but everything around her is crumbling. The most important thing for her right now is not to give up and to learn how to live without eyesight. To accept this situation and continue living with it.

I know, those are just words. I know that for a young lovely girl it might seem like the end. But just 18 months ago it seemed she would not survive at all. And a lot has been done since then.

I will never forget our first meeting. Vika, hang on and remember what’s important. There will be no miracle without your will and desire to live.

RAISING THE STAKES: Putin slams US nuke threat with ultimatum