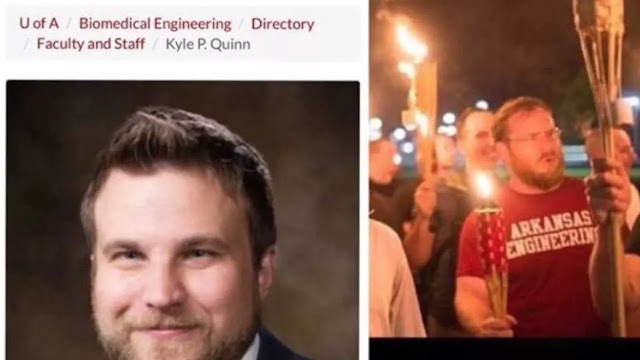 Liberal extremists, profiling attendants of the right-wing rally that took place in Charlottesville, Virginia on Saturday, decided they would target one of its alleged participants and turn his life into a living hell.

As it turns out, they got the wrong man.

Kyle Quinn, who supervises a laboratory dedicated to wound-healing research at the Engineering Research Center at the University of Arkansas, discovered on Saturday that liberal extremists mistook him for one of the attendants of a rally in Charlottesville, and which took place at least 1,000 miles away from where Quinn lives.

The attention of the liberal extremists was likely triggered by the fact that one of the attendants (who resembled Quinn) wore an “Arkansas Engineering” t-shirt.

Not long after, Quinn was attacked with vulgar and threatening messages on Twitter and Instagram, according to The New York Times.

The messages accused him of being a racist, a bigot, said he should be fired, etc…

Some of tweets read “don’t let your kids near him” or “dude doesn’t need to be teaching anywhere”, along with his picture and home address being displayed.

Quinn issued tweets, saying that he wasn’t the man in the picture, that he was not in Virginia that weekend, that he favoured diversity at the University of Arkansas, although to little avail.

“You have celebrities and hundreds of people doing no research online, not checking facts. I’ve dedicated my life to helping all people, trying to improve health care and train the next generation of scientists, and this is potentially throwing a wrench in that.”, said Quinn.

Mark Popejoy, an art director in Bentonville, Arkansas, tried to explain the thing to public and and angry Twitter accounts about how they inaccurately identified Quinn, assuring that the University of Arkansas had confirmed that Mr. Quinn was not involved and has no relation to the rally in Charlottesville.

Despite this, most Twitter users did not give up their persecution of Quinn.