IN DEPTH: Aleppo one year after Liberation

It seems that in the press of the ‘free world’ the truth has lost all its meaning. Under the umbrella of an absolute relativism, the most media propagandists have found an excuse to justify their lies under the premise that they only interpret their reality.

A year ago, during the liberation of Aleppo, the international press carried out one of the biggest campaigns of lies in recent years. Some even became so ridiculous that they did not hide that they based their information on what was published by the twitter account of Bana Alabed, a girl born during the war who lived in East Aleppo. One of his most iconic tweets was one in which he ensured in excellent English that a third world war was preferable to allowing Russia to continue helping the Syrian Arab Army troops in Aleppo.

“Dear world, it is better to start the 3rd World War than to allow Russia and Assad to commit the #HolocaustoAlepo”

Such nonsense, far from being a tweet joke, went further and came to allow prime time “experts” to ensure that ending the rebel bag east of Aleppo was something terrible that had to be avoided at all costs. By the end of 2016 the initial resistance of Fatah Halab had already transformed into a desire to negotiate with the government, but the arm of al-Qaeda in Syria Jabhat al-Nusra and Harakat Nour al-Din al-Zenki -known for recording the beheading of a child – they prevented him from attacking them and even shooting civilians who tried to flee or hoisted Syrian flags. That is, on a set of La Sexta there are those who have bleached and defended with total impunity the same ones that on March 11, 2004 murdered almost 200 people in Madrid.

The campaign had a very clear discourse that could only be sustained with information from which no one has yet been able to provide a single proof or confirmation: Fighting the rebels in Aleppo was a crime and could only lead the city to an even worse situation, to a climate of terror and persecution worthy of the times of our inquisition; even to the religious fanatics who were trying to expel.

Almost a year after the battle of Aleppo and this media campaign, lies are still being spilled without anything to back them up. For this reason I decided to go to the city and discover for myself what had become of her after the battle. I wanted to know first hand the situation and the people who inhabit Aleppo to be able to have their own criteria and check if they had something true what the main media said. 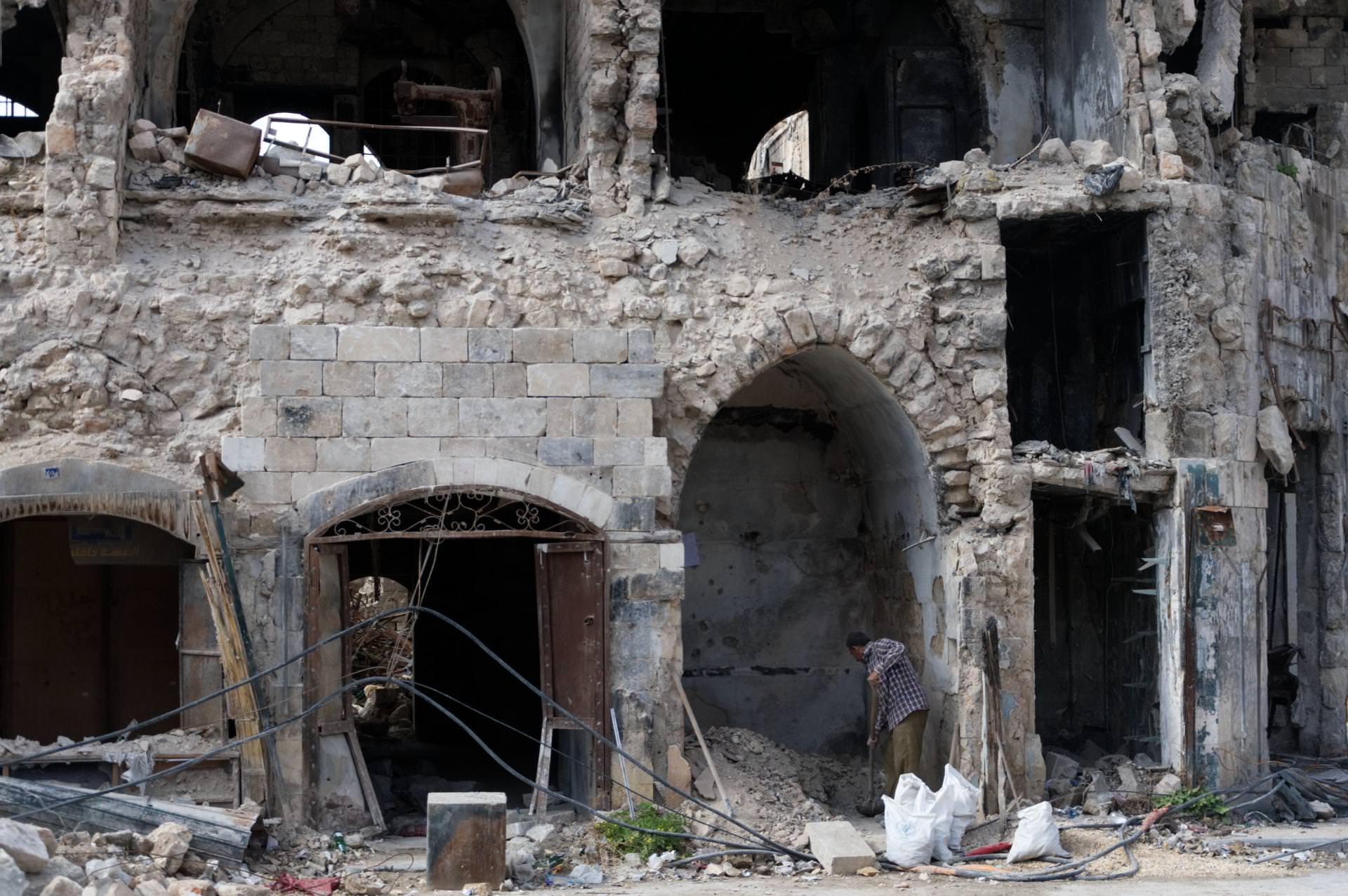 The entrance to the city evokes a post-apocalyptic environment. These are entire neighborhoods destroyed by four years of intense fighting and more than thirty thousand dead. The buildings are nothing but towering concrete skeletons, bullet holes and artillery and twisted metal. However, as you enter the back streets you can find small groups of people removing debris and beginning to rebuild their old shops.

Not all streets are safe, and many are kept closed because the Russian sappers are still clearing them. The most common graffiti in eastern Aleppo is нет мин (without mines) in all demined areas. Unfortunately, these continue to be an important mortality factor in the outskirts of the city.

Curious are also the graffiti of Aleppo наш (Aleppo is ours) in the neighborhoods where there were more intense fighting, and which refer to the joint operation between the Russian Army and the Syrian Army. Due to the large presence of the Russian Military Police, the feeling is that it is easier to speak in Russian than in English.

Contrary to the sometimes desolate silence of the neighborhoods that have not been able to be reconstructed, there is still the west of the city, where life continues uninterrupted. The electrical fabric is destroyed, so the generators are part of the landscape of the city. It is also quite common for generators to fail and light fall for several minutes several times a day.

There are also trucks that patrol the city, bringing potable water to the houses since it has not been possible to completely repair the underground infrastructure crushed by tons of artillery. Despite this, people recognize that in one year living conditions have improved a lot, although there is still a lot of work to do ahead of them. It is curious to walk through crowded streets and think that until recently it was a suicide to go for a walk. 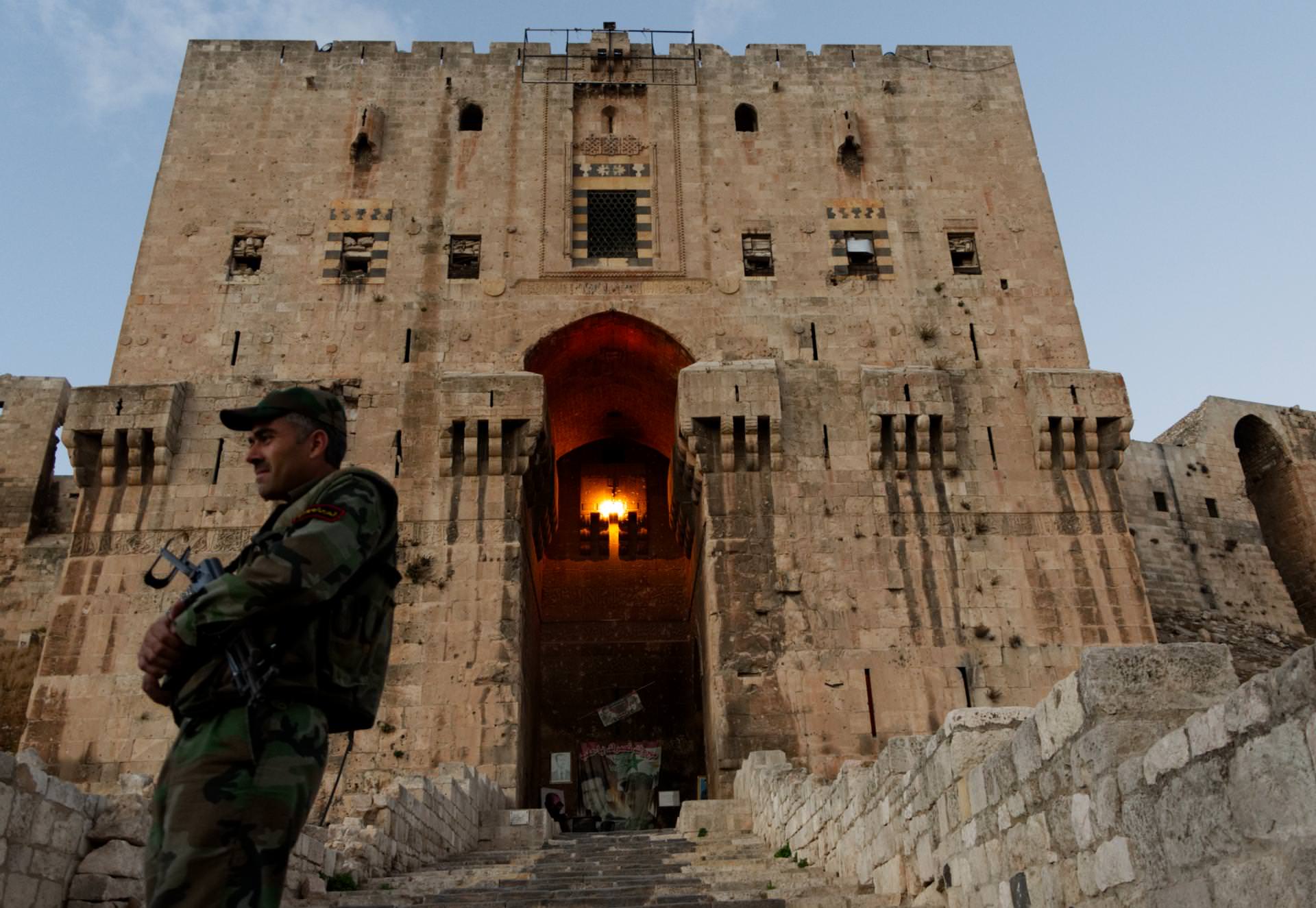 Under the citadel the asphalt has already been fixed and the access is being rebuilt with the financial help of UNESCO . They have also reopened a couple of stalls in which to take a soft drink or smoke shisha under the imposing walls of the citadel , one of the largest and oldest castles in the world.

The main square of the city is Saadallah al-Jabiri , where under a huge portrait of Bashar al-Assad there is a sculpture that recites I Love Aleppo in which it is common to find people photographing themselves. In front of the square there is a building that remembers the war which threatens to collapse at any moment due to the damage suffered by the structure in a terrorist attack .

The square Saadallah al-Jabiri was completely destroyed in 2012 by the fighting, but today it has already been rebuilt and has become the place where the liberation of Aleppo is commemorated .

From where the square is best observed is from the top of the post office building. In 2014, a worker who sympathized with the rebels climbed into it and began throwing his companions from the roof against the street floor until they managed to reduce it. 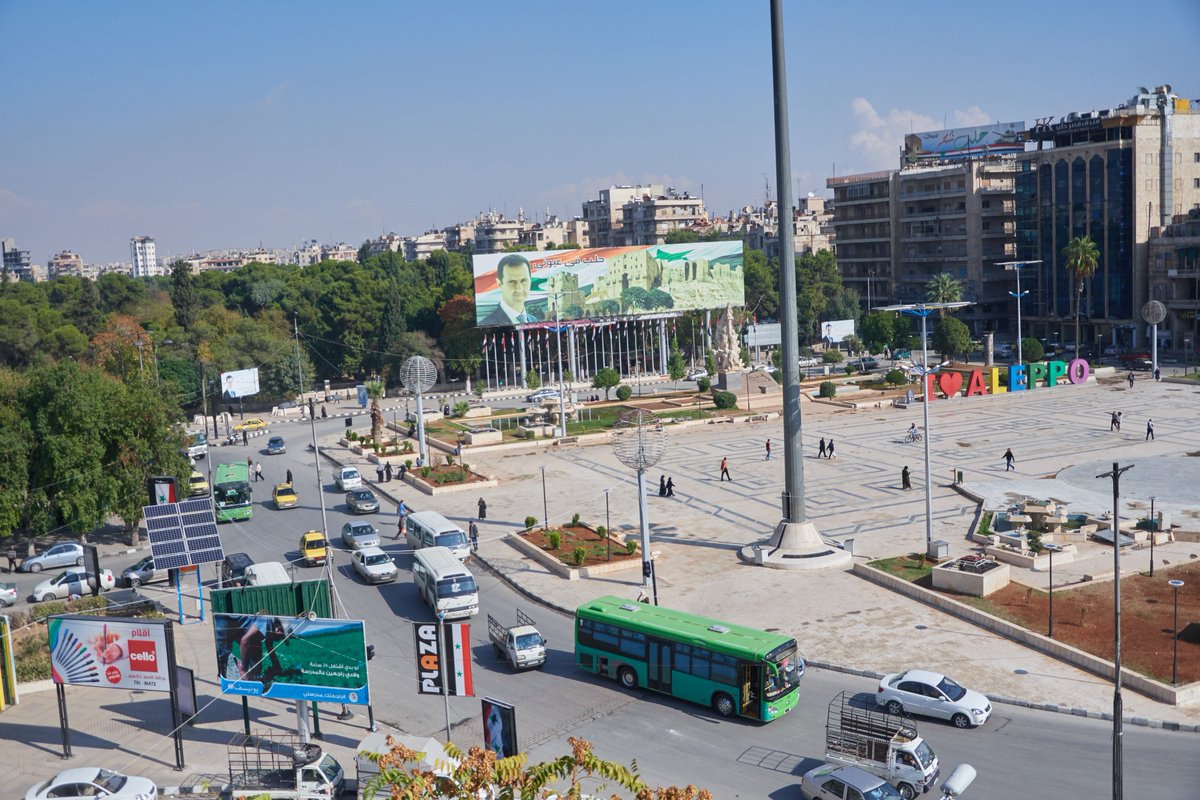 The day that Real Madrid plays, the terraces and bars are filled with people and there is not a single free table. It is one of the teams that moves the most fans in all of Syria; the other is Barsa. With the match the streets are empty, but during the afternoon the street stalls keep the hustle and the constant flow along Shoukri al-Qouwatli and adjoining.

From Bab al-Faraj , one of the nine entrances to the ancient city of Aleppo, it is possible to access a market for which it costs to walk. The first time they have opened their posts since the crisis has been in mid-2017. It should be noted that the population of Aleppo is more conservative than in Damascus, and it is common to see women dressed in black completely covered. However, in this market the first time it is shocking to see these ladies buying lingerie with colorful colors and even erotic marks related to the world of pornography. Maybe something so everyday is what best defines the city: A place of contrasts.

The minarets of the mosques are destroyed. During the battle they were an important position for snipers and the few who resisted aviation were shot down by the rebels when they were forced to retreat. The Omeya mosque was no exception, and it is still destroyed. At the entrance there are soldiers who prevent entering who is approaching the high risk of collapse that has the structure, but if they have a time to share mate. 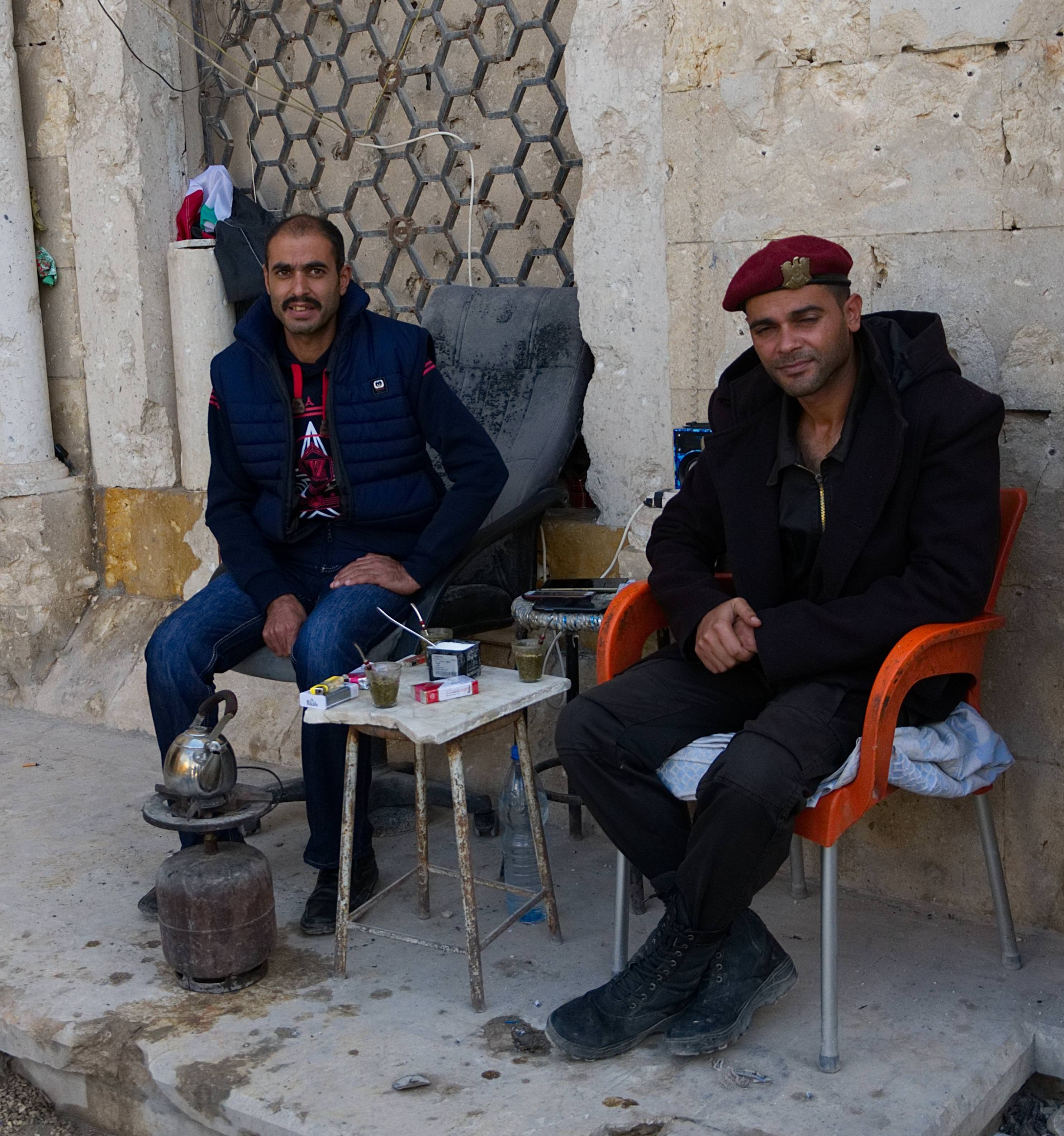 Guards at the entrance of the Umayyad Mosque. On the table, tobacco and mate / Alberto Rodríguez

The feeling with which I have returned from Aleppo is that of having been in a city that reflects the destruction of the war but also the desire for peace and reconstruction of its inhabitants. I have found a city that strives to return to normal.

I have not felt terror or tyranny. On the streets of Aleppo you can talk about politics, but you can also chat football or drink smoothies to the rhythm of Latin music. One can drink alcohol and even celebrate Christmas. These things, however, were forbidden under Fatah Halab and the rebels. 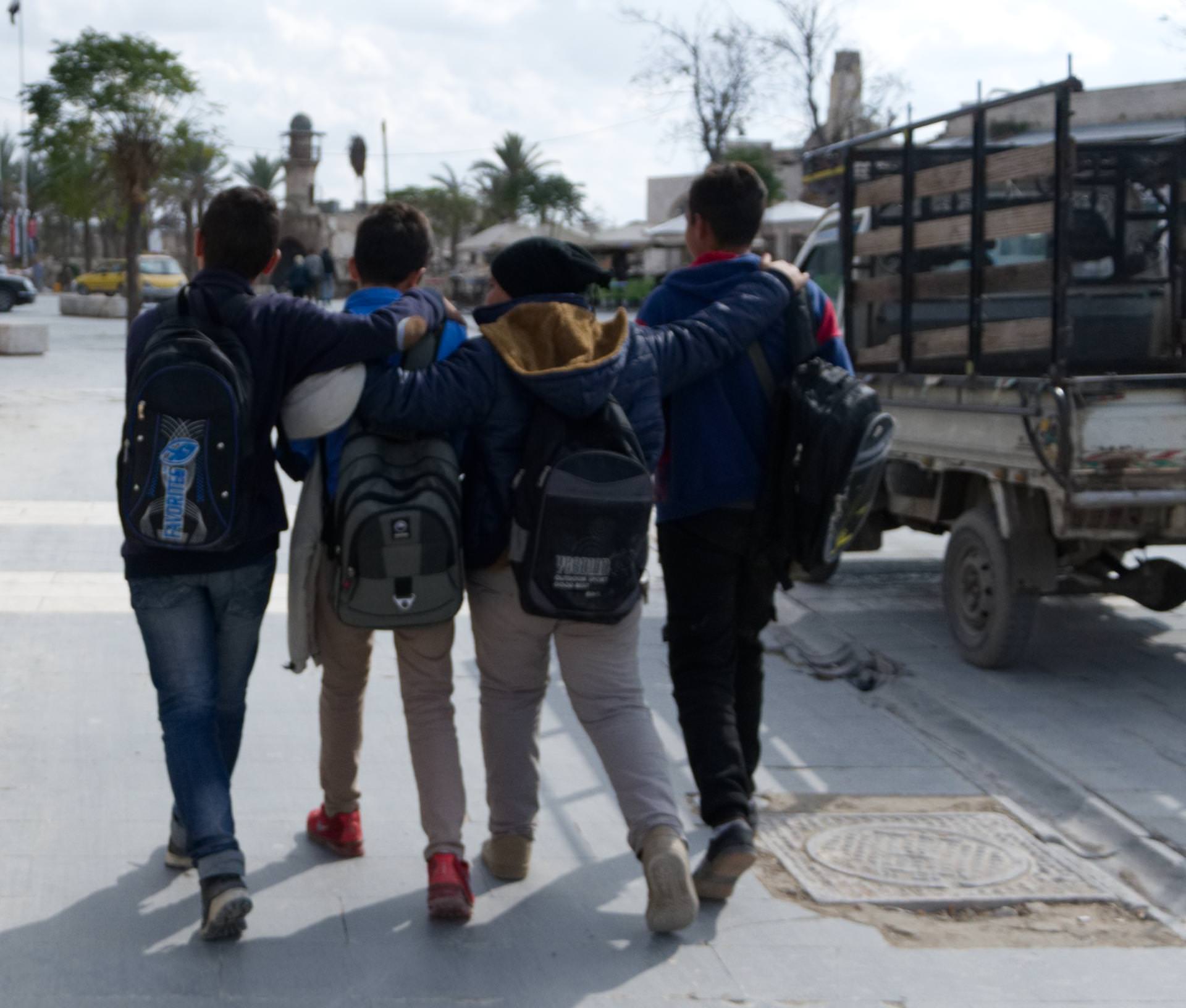 In Bannon Versus Trump – The Two Faces Are The Media’s