“Death to Russia” Riots in Kiev: A Sign of War to Come in Donbass?

KIEV, Ukraine – Ukraine is irreversibly slipping further into Nazification. Following the oath-taking of 600 militants of the newfound National Squads (a subsidiary organization of the Azov regiment intended to “aid” police in keeping order) and following the de facto occupation of the Cherkassy city council (the regional center right next to the Kiev region), Ukrainian Nazis are rehearsing new assaults in the spirit of Ernst Rohm’s street fighters from 1920’s Germany.

Like any historical analogy, this one is conditional. The situation in today’s Ukraine is much worse. While in Weimar Germany the state as a whole did not indulge the Nazis nor use the full force of its repressive apparatus against them, in Ukraine the oligarchic regime of President Poroshenko has given the Nazi street movements the green light. Why and for what purpose will be discussed below.

For now, let us recap the facts. On February 18th, Kiev saw Ukrainian “radicals” (Ukrainian Newspeak for outright Nazis) from C14, Right Sector, and Nikolai Kokhanivsky’s Organization of Ukrainian Nationalists (which is the continuation of Bandera’s OUN-b) attack the building of Rossotrudnichestvo (a Russian agency promoting Russian culture) with rocks and eggs.

After this, activists descended on Russian Alfa-Bank and pelted it with rocks. On their way to the Rossotrudnichestvo building, the Ukrainian “nationalists” also swooped down on Russian Sberbank and broke its windows with stones. The police stationed at Sberbank did not intervene.

What is so special about this situation? What is it here that allows us to talk of Ukrainian Nazis coordinating with Ukrainian police and intelligence services?

First of all, the February 18th actions were prepared and advertised beforehand. A “rehearsal” was held on February 17th with a first attack on the Rossotrudnichestvo building. At that moment, there were around 100 people inside, including many children present for a theater rehearsal. The Nazis broke down the doors, left graffiti inscriptions on the walls, destroyed the exhibition in honor of the Russian opera singer Feodor Chaliapin, and torched a Russian flag.

Immediately afterwards, the Nazi groups published calls across social networks to attack the same building and Russian banks the following day as part of their “Death to Russia” action. In other words, the February 18th attacks were widely advertised, rehearsed, and therefore no secret to the Kiev police.

But what did the law enforcement of the Ukrainian capital do? According to the independent Ukrainian resource, strana.ua, on February 17th the Kiev police broke their security contract with Rossotrudnichestvo’s office in Kiev. A photo has since been linked of an official letter from the police department to the head of the Kiev branch of Rossotrudnichestvo, Konstantin Vorobyev. The letter says that due to “force majeure circumstances”, the police were hereby unilaterally cancelling their contract for the protection of the premises at Borisoglebskaya street starting at 21:00 on February 17th. 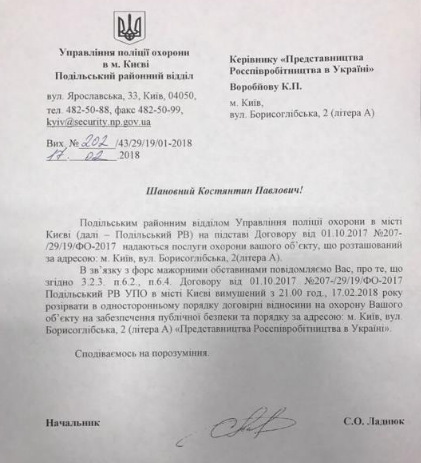 Thus, the Ukrainian state de facto gave the green light to Ukrainian Nazi attacks on cultural and financial organizations belonging to a country which maintains diplomatic and trade relations with Ukraine and on whose territory around 4.4 million Ukrainian migrant workers earn their living. Russia, alongside the EU, is still Ukraine’s main trading partner.

In my previous articles, I’ve repeatedly pointed out the link between Ukrainian Interior Minister Arsen Avakov and the main Ukrainian “Aryan”, Andrey Biletsky. As it turns out, Avakov’s ties are not limited to the Azov regiment and National Squads. Kokhanivsky’s OUN, Right Sector, and C14 are organizations operating at different levels of ministerial subordination. For example, the C14 racists are considered to be the “personal proxy” Nazis of the SBU used to carry out sensitive tasks.

Judging by everything at hand, I would presume that the attack on the Russian cultural center was more than or not so much of an interior ministry affair, and that Avakov is pursuing political goals which differ, for example, from the repetitious demonstrations of force and political stances that Avakov and Biletsky coordinate in tandem.

I understand Avakov’s goal to be “warming up” a pseudo-patriotic spirit in Ukrainian society as much as possible and thereby creating a favorable psychological atmosphere in the run-up to a new war in Donbass for which, in line with our previous analyses, Russia is increasingly being presented as the main enemy of the Ukrainian oligarch-Nazi state. After all, Ukraine’s military preparations in the “Anti-Terrorist Operation Zone” need appropriate propagandistic support, as only a minority of Ukrainian society wants war in Donbass, much less suicidal war with Russia.

By all accounts, war will break out very soon. I would like to be mistaken in this prediction, but Ukrainian military and political developments seem to suggest that war is coming.

Do sane Ukrainians recognize this threat? Are those who once supported the Euromaidan and ATO now reeling back in fear of the torchlight marches of Ukrainian Nazis and their rehearsals for seizing power? Without a doubt, yes.

For example, following numerous threats, searches, and SBU allegations of “revealing state secrets” (?), the editor-in-chief of strana.ua, Igor Guzhva, fled to Austria. If he hadn’t fled, Guzhva would have shared the fate of those dozens of Ukrainian opposition journalists who have been killed under mysterious circumstances. Perhaps his site’s reporting on the Nazi attack on Russian cultural and financial institutions will be portrayed as an “FSB operation.”

Another clever Ukrainian who supported the Ukrainian state’s suicide on the Euromaidan and who now fears the possible implications of a Maidan 3.0, the political analyst Oleg Voloshin, wrote on social networks on the events of February 17th and 18th: “If this is not a lite version of 1917, then I don’t know what else to compare it to. Those who say that peacekeepers and external control must be imposed on the whole territory of Ukraine, and not only in Donbass, are right. Someone has to rein in this lumpen revolt under nationalist slogans.” This is a more than relevant statement, especially if we consider the fact that the head of the OUN movement, Nikolai Kokhanivsky, promised that riots at Russian facilities in Kiev will continue.

However, the sobering-up of people like Voloshin makes little difference. The “Death to Russia” action and the National Squads’ march speak to something bigger than a mere dead-end of the Euromaidan. In my opinion, all of this is the logical result of the evolution of the Ukrainian idea as such.

On this note, I’ll end this article with a polemical statement: humanity’s main enemy in Ukraine is not Ukrainian Nazis, but “Ukrainianism” itself. The first is the brainchild offspring of the second. The spiritual roots of Ukrainian Nazism can be traced back to the semi-literate, malicious verses of the “Ukrainian God”, Taras Shevchenko. 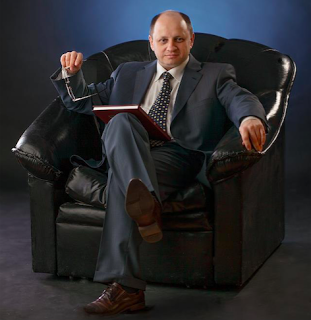 Eduard Popov is a Rostov State University graduate with a PhD in history and philosophy. In 2008, he founded the Center for Ukrainian Studies of the Southern Federal University of Russia, and from 2009-2013, he was the founding head of the Black Sea-Caspian Center of the Russian Institute for Strategic Studies, an analytical institute of the Presidential Administration of Russia. In June 2014, Popov headed the establishment of the Representative Office of the Donetsk People’s Republic in Rostov-on-Don and actively participated in humanitarian aid efforts in Donbass. In addition to being Fort Russ’ guest analyst since June, 2016, Popov is currently the leading research fellow of the Institute of the Russian Abroad and the founding director of the Europe Center for Public and Information Cooperation.

Citizens of US, Ukraine arrested in a series of infiltration attempts in Serbia

In Ukraine’s Clown World, Donbass Representatives are Chosen by Kiev