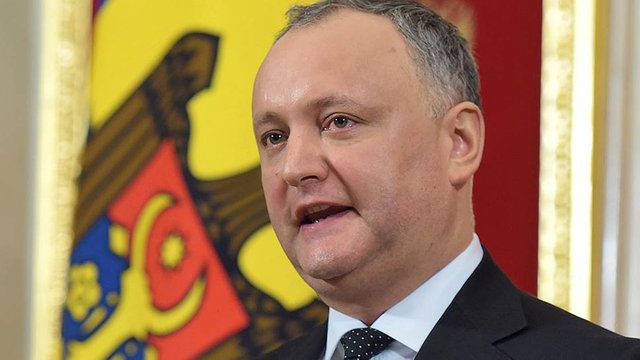 Moldovan President Igor Dodon has condemned the plans of the country’s government to purchase weapons for the army of Moldova from NATO. Dodon will bring this matter to the Supreme Security Council of Moldova.

“We will hold a meeting of the Security Council, where we will discuss the proposal of the Defense Minister Yevgeny Sturza to purchase lethal weapons, although there is no money for this purpose in the country’s budget, and the government complains about the absence of financing the maintenance of schools and hospitals, repairing roads, increasing salaries, pensions, social needs,” Dodon said.

Dodon stressed that Moldova is “a neutral country,” noting that “the task to buy weapons unnecessarily for the Moldovan army was coerced from abroad.”

Dodon intends to discuss the security issues, the neutrality of Moldova and the Transnistrian settlement. “In the association agreement with the EU, which was signed by the government, the issues of defense and security are vaguely spelled out, while for Moldova, which should maintain and strengthen our neutrality, they are important.”

“If Chisinau decides to join NATO, we can forget about a solution of the Transdniestrian problem, Moldova in its turn has no chance to preserve statehood if it does not unite,” Dodon said and recalled that the majority of Moldovan citizens favor the neutral status of the country, and accession to NATO is supported by only 19% of the population.

The Moldovan president stressed that the government’s decision to open a NATO office in Chisinau is aimed at convincing the population of the country of the need for rapprochement with the alliance. “If the politicians in the West and in the East use us in a fight against each other, this will turn into destabilization of the situation in our country and even an armed conflict, as it was already in the early 1990s in Transnistria, as it happened recently in Ukraine, But under equal pressure – Moldova will disappear as a state, ” concluded Dodon.

“I Said No” – The Self-Deceit & Defeat of Aleksandar Vucic