Is Putin the “problem” or was Russia always “evil”? The outtake in this video features Sergei Mikheyev, a political scientist on Tsargrad TV, who states that the West has always generally had a problem with Russia. While Putin himself is the current nemesis – the concept of the “evil empire” is nothing new. In fact, the only time that Western leadership is non-critical of Russia, is during weak leadership – we only have to think as far back as the Yeltsin years.

The past few years have shown a steady growth in anti-Russian hysteria. A logical starting point would be the coup d’etat in the Ukraine in 2014 – orchestrated by Western powers – leaving Russia with the only sensible option to take back the Crimea, a strategic naval port. While this won President Putin a lot of brownie points at home – it certainly fulfilled its propaganda quota of “the aggressor state” in Western media. This was followed by events such as the downing of MH17, accusations of atrocities in Syria, the “Panama Papers” scandal, US election meddling, and so on.

Come March 2018 – the timing of the Skripal poisoning was no coincidence, neither was the “state sponsored doping” scandal at the Olympics in February. Much is being done to discredit the Russian government, and cause internal unrest. Even the recent fire in Kemerovo saw Russia’s liberals demand Putin’s resignation – 6 days into his re-election – as if any other leaders worldwide would be required to quit at a time of national tragedy.

But the real test is not going to be now – the real test is in 2024, at the end of Putin’s term. Many Russians are assured in Putin’s ability to play the game correctly, that’s why he was re-elected after all. But cultural factors must be taken into account; a growing generation of young people who don’t know of life in the 1990s, a growing number of liberal opposition figures funded from abroad and treated like long-lost cousins in Washington, economic pressure due to sanctions, and so on.

In conclusion, Putin won the elections 2018, the FIFA World Cup is not cancelled, US-funded rebels have left Eastern Ghouta in Syria, Russia expelled more diplomats than the British. Why exactly did the Brits poison the Skripals – if not to attempt to manipulate the Western audience into the wickedness of Russia?

On the situation with minor languages in Russia – Konstantin Zamyatin

I am not sure, he could do like Xi and stay in power until necessary, as ZIrinovsky suggested, while forming a group of elderly who will always look on the new president. Just like in the Soviet Union.

Putin needs to do what Yeltsin did, pick a successor and resign on his last 4 months in office. He needs to retire and rest. Being President is hard work and he is overworking himself.

AM Hants
Reply to  Ser Korz

He has given so much and more to his nation and deserves to have time to enjoy his private life, when he is ready. Good idea with regards the Yeltsin successor motion.

Agree with your post – however, He (Putin) motd be very carefull this time around (his last choise Medvedev was a disappointment).
But, from recent actions there are many competent and patriotic ‘candidates’ – Gerasimov, the Chief of the Russian General Staff, surely look good (but only one of many). As luck would have it, the Russian People have given Vladimir Vladimirovich the grace of ‘breeding’ a new ‘heir’ for a period of six years!

AM Hants
Reply to  Ivan Grozny

President Putin and Medvedev have known each other for decades, and there is so much trust there. I have more faith in Putin and his choice, especially, those that have proven themselves, than the grapevine. How many would have taken the Presidency, just to keep it warm, till the previous occupant came back? That seriously shows a lot of trust, between the pair of them.

You are right! While Medvedev earlier have shown much leniany to the west, he has recently showed much (rightfull) anger against the same!
Also, as you mention, he has showed himself to be truly loyal!

AM Hants
Reply to  Ivan Grozny

I basically go by the trust the pair of them must have, to swap positions, without any resentment or games. Cannot say, it is something that is common in politics, where the knives are normally hidden, somewhere behind those grins. Together with the fact they have known each other, since their time at St Petersburg University. President Putin, reads a person in seconds, plus, he has a seriously strong and powerful team around him. For a reason.

Besides, Putin has a high regard for loyalty – and Medvedev has certatinly shown that – one of the reason he is still on the team!

I have always felt that he can see through you, as if gifted with a particular gift of discernment.., that is why his enemies fear him!

he looks so naive to me..

AM Hants
Reply to  lsammart

He got 20% of Uranium One, from Clinton, knowing exactly how to trade with the woman. Russia did nought wrong, as it was a business deal. However, the same cannot be said of the US Secretary of State, at the time.

But there is one problem,the fun for russia has only just started,why miss out on all the fun?

Putin, at the end of his term, will be the same age as Trump is now. If he really wanted to – he could change the constitution, like China has, to stay in power longer. Im just not sure he wants to – he has said multiple times he doesnt intend to be there till he’s 100 🙂

Agree totally – but has to make sure the sucessor is a great patirot as he himself has shown himself to be – the only interest being the interest of the Russian state and the Russian people! (not easy to accomplish)

Trump’s well into his 70’s to understand man is to understand
mindset,putin is a 9th dan blackbelt along with a host of sound innovating,i see no limits and besides who saise ye gotta go?

Putin is no Pope, or King, to die of old age in office.
He will retire and enjoy is Autumn of life before it becomes his winter.

Thanks for the great video and subtitles Inessa. Good work!

AM Hants
Reply to  Franz Kafka

Glad to see you, as I have just used the Merkel and May image, you posted, when they were in their teens, but, did not credit you. Sorry. Do you have the information behind the photo, as seriously curious how they met up? Don’t know why the eugenics programme comes to mind.

Franz Kafka
Reply to  AM Hants

A Eugenics weekend on a small Swedish (allegedly non-aligned) Island?
Do not credit me, except for trying to make it go viral.
I got it from others in the forums.
Won’t name them as they may not want that.
But apart from destroying Fake Feminism and proving that Life imitates Art,
this coven of barren witches go to the heart of the matter to the chant of “Double, double, toil and trouble” – a talmudo-satanised ‘West’.

Where the photo of this lesbian menage a trois was taken should provide a wealth of riches for further speculation.

AM Hants
Reply to  Franz Kafka

Interesting and cannot wait for somebody to post the article that went with the image.

Helen B
Reply to  Franz Kafka

Yes I wondered when it was taken. Of course three young friends together doesn’t mean lesbianism …
But a EUGENICS weekend? Bill Gates Snr et al ?? in Sweden of all places?
How very interesting.
Of course eugenics doesn’t mean that the believer chooses barren-ness, it means that the lesser beings are sterilised. Those chosen ones can breed their superior genes far and wide …

Franz Kafka
Reply to  Helen B

The ‘barrenness,’ whether by choice or luck. is an interesting feature of much feminist accession to power.

We are seeing the ultimate move on the Western countries right now. The Zionists are making their move and many of these countries will say and do everything they’re told to. It’s real obvious, so let’s see how much more pressure will be put on individual rights in the US and EU. Already the Skripol case, the slaughter and wounding of over 1000 Palestinians without one word from the US or EU, ” little America/Israel homesteading in Syria, Corporations getting any laws passed regardless of all the public protests, and the list is getting bigger.

They have been trying since 2000 and how far have they got? Besides increasing President Putin’s popularity, as shown in the recent elections.

Between now and 2024, there will a non stop, soft-spy op programme, using discredit, denial, derailment, discourse, disagreement, with regards President Putin. You saw a lot of it, on social media, with say the Communist Candidate, who aallegedly keeps his gold in Switzerland and run his campaign, like a Soros script. How many of his supporters, would commentate, running down the achievements of 21st century Russia, completely ignoring Yeltsin Russia, but, praising the days of the Soviet Union. So scripted and pure Soros driven. Weird that. 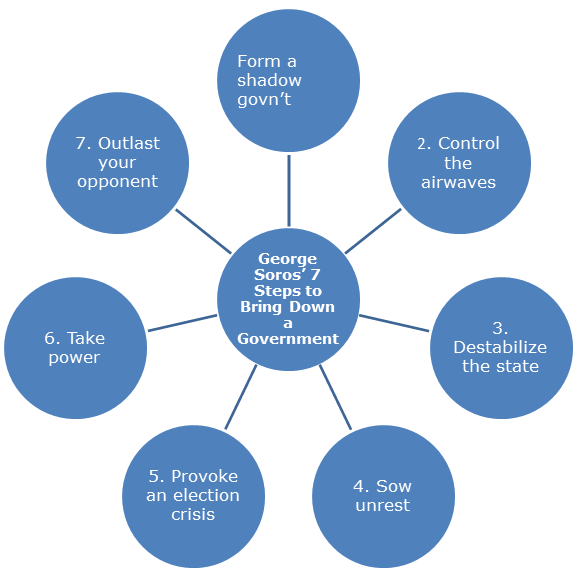 Russia should do a “Hollywood” – make films about the Yeltsin era – make sure those young folk know just what happened.

Stalin saved Russia from that (((evil))) which migrated to a former ‘west’ ÔÇö which now attempts to reflect (((its evil self))) onto an enemy of evil. TJB.

I don’t know that “The West” has that long….
Look at USA whopping tariff threats against China and now pure-nonsense sanctions against the Russian MIC…… seems to me they are getting REALLY very desperate.

On top of that US is playing Saudi for MORE money: “We’ll pull out of Syria if you don’t pay us to stay.” … and IMF says Saudi will be out of money by 2020.

Malaysia elected the leader who’s heading toward 93 and he’s pretty much very smart on the international arena,Putins not vain once he feels it’s time he will make his choice and that’s that.I guess oonce the world is in order and the deep nazi states eliminated + charged + prisoned?