A group of leading Russian scientists – neuroscientists, physiologists, geneticists, philosophers – will meet with Buddhist fellow monks led by the Dalai Lama XIV at his residence in the Indian city of Dharamsala on May 3-4 to discuss the fundamental issues of worldview, consciousness, brain, evolution, cosmology and human values.

“Dialogue between representatives of science and Buddhist philosophers led by His Holiness the Dalai Lama is an initiative of the spiritual leader of Tibetan Buddhism, which is already over 30 years old, but this time the dialogue is joined by scientists from Russia. In Buddhism, skepticism and doubt have always been welcomed as a method of investigating reality, ” the Dalai Lama’s representative in Russia, the CIS countries and Mongolia told RIA Novosti.

The conference in Dharamsala titled “Understanding the World” will be the second experience of building “conceptual bridges” within the framework of the promising project “Fundamental Knowledge: Dialogue between Russian and Buddhist Scientists”. The first ever such meeting headed by the Dalai Lama and a group of outstanding specialists from Russia, including the well-known neurolinguist, honored worker of science of the Russian Federation Tatyana Chernigovskaya, was held in August 2017 in Delhi. It was devoted mainly to the theme “Nature of Consciousness”. Then Russian scientists were deeply impressed with the profound questions and comments of Buddhist colleagues, their knowledge in the field of quantum physics. And all the participants decided to do it all again. And the best form for this is the lively discussions that will take place in the main Buddhist center. 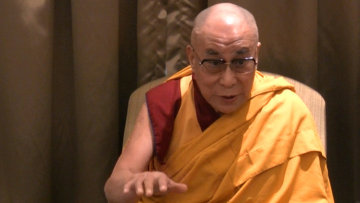 The moderator of the meeting will be the leading Russian neuroscientist, Konstantin Anokhin.

Compassion: when science is more effective than religion

“Today, the gap between rich and poor and many other problems that some people try to solve through violence and wars is growing, but weapons do not solve problems, … The influence of science on people, on their education, thinking, behavior, can help in solving the problems facing humanity, ” the Dalai Lama said.

The spiritual leader identifies two main goals of his meetings with scientists.

“The first goal is the extension of our knowledge through scientific research, so that science would pay attention not only to the objects of the external world, but also included our consciousness, emotions, our mind.” Today, many scientists say that constant anger, fear, stress very badly affect our health. For peace of mind, a calm mind is very important, but what is consciousness, what is its nature and structure, this is still a mystery to scientists, ” the Dalai Lama said.

The second goal, he said, is connected with the fact that it’s time to stop dividing people into “ours” and “outsiders”. It is precisely the strong sense of opposing oneself to a stranger that underlies violence, the Buddhist teacher is convinced.

“We need to explain to people: despite some differences, political, economic, religious, we are all part of the seven billion people and should build relationships based on trust and take care of each other.” There is already scientific evidence of the beneficial influence of love and compassion of a person, his family, the state and the whole world. Traditions for thousands of years have talked about love, but it was not particularly effective. Scientific discoveries easily convince people, ” the Dalai Lama believes.

His book “The Universe in One Atom: Science and Spirituality in the Service of the World” about the relationship of Buddhist concepts to the basic ideas of modern science will form the basis of discussions in Dharamsala. The very names of its chapters speak of the breadth of the Dalai Lama’s interests – among them, for example: “Emptiness, Theory of Relativity and Quantum Physics”, “The Big Bang Theory and the Buddhist Primordial Cosmos”, “Evolution, Karma and the World of Living Beings,” consciousness “and” Ethical problems of modern genetics. ”

“Science was divided into the European and Eastern ways back in the era of ancient Greece.” Great buildings of the past (pyramids, colossi, hanging gardens) could not have been created by people who did not know that the sum of the squares of the legs is equal to the square of the hypotenuse. Then came Pythagoras, who said that there is only a small amount of knowledge – it is necessary to prove this knowledge mathematically, and then the era of mathematical proof came,”- said a famous Russian physiologist,  Svyatoslav Medvedev.

It was believed that with the help of mathematics everything can be proven. “Although the most important thing is not yet proven: the law of conservation of energy, the second law of thermodynamics (non-decreasing entropy),” the academician added.

For the eastern route, in his words, unlike the western one, it is more important that knowledge itself is obtained logically than from mathematical proof.

Buddha answered many of the direct questions with an enigmatic smile. “Our task is to understand the answers to these questions, but we have practically exhausted our mathematics,” the agency interlocutor stated.

“Simple things like the movement of the Earth and the Moon are calculated well, but if we turn to the studies of, say, the brain, then mathematics ceases to be a test for a living system.” It is now practically no longer able to prove anything, in biology … When we are at an impasse, when studying the human brain, its consciousness , it turns out that there is tremendous variability.The brain never solves one problem equally twice in a row the same way, ”

At the same time, he stressed, “Russian biology, physiology and psychology are ahead.” “Because we are based on schools that gave us representations in a generally Buddhist way – through a logical analysis of the situation: they are the schools of Sechenov, Pavlov, Bekhterev,” the academician explained.

At the same time, he believes that “there is not a rapprochement of science with Buddhism, but mutual enrichment,” a transition to the logical path of research, when the most important factor is not mathematical reliability, not a formula, but consistency. Logic is very developed in Buddhism. And in this regard, new opportunities for the study of consciousness can be opened

The leading Russian neurophysiologist considers the study of the brain system (which is “much more extensive than was believed until now”) and the mechanisms of creativity to be the most important areas of research in its field today.

“He is one of the smartest people I’ve ever seen in my life,” the academician believes of the Dalai Lama.

Change for the better the collective consciousness

The Russian expert in the field of philosophy of consciousness, Professor David Dubrovsky, is several years older than the Dalai Lama, 82, and they had very warm relations during the first meeting of scientists in August last year in Delhi. In an interview with RIA Novosti, the professor told us what kind of knowledge and thoughts Russian and Buddhist researchers shared with each other.

According to him, both pain – is information about a certain state of the body, and a negative emotion – a display of some discomfort in the complex structure of brain processes. “The phenomenon of subjective reality and its neurodynamic carrier are simultaneous and are in a one-to-one correspondence, which means that any change in my subjective reality (for example, switching attention) is a change in my brain processes.” – said the professor.

Mass consciousness, he said, has a number of cardinal negative properties: “irrepressible consumerism,” aggressiveness, excessive egoistic self-will in pursuit of one’s own interests.

“They (Buddhist scholars – ed.) Go through wholeness and research ideas, but they do not impose their point of view on anyone and do not declare it better than others. They are interested in the content part, and not bringing other people to their faith. I am very close, and I am ready to answer any question in the sphere of my scientific interests, which I will be asked from the Buddhist side, ” Yankovsky added.

Answering a question about the ethical aspect of science as a whole and modern biotechnology, especially important for the Dalai Lama in particular, the agency’s interlocutor noted that this issue is not for researchers but for those who apply scientific discoveries. “The quietest, and from someone’s point of view, perhaps the most ethical, would be to not open anything at all – then nothing dangerous will be openly disclosed,” joked one of the leading Russian specialists in genomics and genetics.

Buddhist scholars are monks from Tibetan monasteries-universities in the south of India. All of them not only completed the full course of monastic training, but also studied modern natural sciences in various universities of the world, to subsequently teach them in their monasteries as part of the expansion of the curriculum initiated by the Dalai Lama.

The Tibetan Culture and Information Center (Moscow), the Save Tibet Foundation (Moscow) and the Dalai Lama Foundation are sponsoring the Dalai Lama’s dialogue with Russian scientists, with the support of the Moscow Center for Consciousness Research at the Philosophy Faculty of Moscow State University and the Institute of Philosophy of the Russian Academy of Sciences.