Jihad Vs McLanguage – Cultural Sovereignty During the Decline of ‘Globalization’

Over the past year or two, I’ve endeavoured to popularize the concept of “Jihad Vs McWorld”. If you want a really tangible demonstration of “McWorld” in action, look no further than the McDonalds workplace policy brought to light by Newshub this evening – wherein Maori staff responding to Maori customers attempting to place an order in Te Reo Maori, was firmly clamped down upon by McDonalds’ management, on grounds that “English is our McLanguage” .

It is no coincidence that McDonalds has declared English to be its “McLanguage”. Rather than, say, the ‘lingua franca’ of its day-to-day interior operations.

The very concept of “McWorld” is the homogenization, the monolithicization of human diversity – the reduction of the spectrum of human cultures and customs down to easily commodifiable and capitalistically, neoliberalistically exploitable kernels.

On a trite level, I suppose you could say that it’s the replacement of genuine Kiwi cuisine with the “KiwiBurger” – an item of culinary cardboard fundamentally the same (possibly minus the egg) as the Australian burger McDonalds marketed in *that* country as something distinctively “Oz”.

And if all it is, this “McWorld”, this “McLanguage” concept, was the endeavour to appeal to soft-pap simulacra-patriotism when entrepreneurially exploiting the hunger of the masses … then that would perhaps be one thing. A ‘bait-and-switch’ carried out with beetroot in a burger.

But that is not at all what we have here.

Instead, it is the concerted effort to expunge the very realities of being ‘human’ [one of which, of course, is that there is no ‘singular’ reality of humanity – and instead many and various different heritages, perspectives, and other nexes of peoples worth preserving within their own spheres] in favour of increasingly incredibly bland vague platitudes.

“Ananda?” No, we won’t have any of that. Simply be “happy” – as in “happy meal”. An emotional stimuli inculcated into us since childhood via the mediums of birthday parties and made-in-China toys-of-the-week. A commodified ‘feeling’, that has as much resemblance to actual “happiness” and contentment as a cheeseburger does to promoting [stomach-]fullness and dietary health.

Your own language, culture, and customs? Nah, can’t have that. Gets in the way of the verisimilitude. Management might have to learn some new words, and Marketing might need to put a bit more effort in. And in any case, a ‘distinctive’ people, who remain ‘disconnected’ from the “realities” of corporate-carbon ‘consumerhood’ as the highest expression and authenticity of ‘being’ – are a harder market to crack and profit-maximize on anyway.

Now, to be sure, this phenomenon is not entirely sui generis. The rapacious history of colonial-cultural exploits includes quite the array of previous comparable instances to draw from.

We could talk about the Macauley educational pogrom (it seems altogether too ‘sanitized’ to simply call it a ‘programme’) in British India – wherein the Brits decided that the key to turning the Indian peoples into pliant, pliable subordinates of Empire meant attempting to rob them of their own ancestral heritages and traditional sources of knowledge, languages, means of instruction and other nexes of nascent identity for the young.

In their place, substituting a very much ‘English’ educational impetus – replete with the trashing of Sanskrit-derived literature in favour of Jane Austen.

The impacts of that most egregious act of wilful attempted civilizational vandalism continue to be felt to this day, in India. Even despite Independence being achieved, there remains a certain curtailment of the permeation of pre-British Indian culture and heritage within India itself as a result – more than a hundred and fifty years after the fact!

This, arguably, is the *nicer iteration* of the fate which awaits any nation – any people, any ethnos, any tradition – which is insufficiently prepared and On Guard to ward off the pernicious permutations of what I suppose we may have to start calling [oxymoronic in the extreme though it might be] “McCulture”.

But if there are not overwhelming differences of ‘kind’ between this ‘Macaulayism’ and latter-day McWorldism [perhaps we shall soon see ‘McMacaulayism’ as a ‘term of (mc)art’ ] , there are nevertheless distinctions of degree which may render McWorld-ism in some parts *worse* – due to its very banality.

I mean, I do not *at all* approve of what is entailed by Macaulayism. Do not get me wrong. But there is a qualitative difference between English, as the language of Shakespeare – and utilized in the engagement with same – versus what I unheartily expect that “English is our McLanguage” presumably entails.

In that regard, this “McLanguage” concept most likely represents an unutterable act of vandalism not just against the non-corporate(//-)metropole cultures it seeks to (neo-)colonize and vanquish – but against the very cultures and language which somehow inadvertently gave it birth in the first place.

McLanguage – and therefore, by extension, McWorld – is therefore a virus, a parasite. Something that is inculcated into a ‘host’, via a ‘carrier’ [funnily enough often from thirty thousand feet, so to speak; or perhaps launched off a rather more literal ‘carrier’ somewhere offshore, in either case to make the way for what comes next] , and which then begins the drawn out process of drawing and quartering its new bio-cultural environment until it has simply remade itself, over and over and over, and sought to most successfully repress anything *not* of itself which might plausibly thus resist it (or – ‘worse’ – allow others to organize to do the same).

That is why ‘McLanguage’ (again, not my term – literally McDonalds’ own word from their own policy and internal propaganda documents, issued in the form of poster-mounted commands to workers) and McWorld are so viciously, vigorously, vitriolically, vindictively *opposed* to the yet-remaining instances of Human distinctiveness, cultural diversity – actually-existing Nationalism that cannot be suborned into simply another ‘human face’ for neoliberal ‘civilizational’-tier nightmare.

Because *those* things – those sacred, important, autochthonous, above all *genuine* things – are the bulwarks, the tools, the floodgates, the ramparts, the *weapons* via which “McWorld” can yet still be meaningfully opposed.

And through such, reminding people – people*s*, in fact, in the definite plural of pluralities – who they *actually* are.

It is no coincidence, either, that successful anti-/de-colonial projects have historically functioned on exactly this basis.

The only difference there, then, was that the subject-peoples [in both senses of the term – albeit the latter only realized in the progression of time once they had successfully reclaimed some measure of agency from the mire of ‘object’-ification *as* ‘subjects’ of Empire] *knew* who The Enemy was, and how to fight him.

Today, we are implicitly, effectively, living in a world ruled by a Clown ; and just as Ronald McDonald hides behind Mayor McCheese in the exercise of temporal power – far too many people today remain patently unaware of this intransigent, indolent fact.

The waging of ‘Jihad’ against McWorld, then, requires the deployment of potent ideological weapons – one of the most important and significant of which being the very idea that there is a War going on in the first place.

And the second, perhaps, being that the ‘tools’ with which we fight the clown-faced oppressor – those of our own language, heritage, culture, religion, tradition, (communication/confirmation), .. and yes, actually, ‘cuisine’, also – are not simple ‘weapons’ of ‘memetic warfare’. But are instead, *also* the effective building blocks, the skeletal – spinal – and nervous structure for the World, the Worlds, That Is To Come , next.

So with that in mind … celebrate your own culture; reconnect with your own heritage; and tangibly reject the globalism – not least by “work[ing] as if you lived in the early days of a better nation”.

Short of imitating the example of anguished Serbians against Belgrade’s only McDonalds immediately following the outbreak of NATO’s air-war against their country; or perhaps more recently, the closing down of symbolic McDonalds outlets in Moscow by the Russian state … that is what we can do. What we *must* do.

Fortunately for us, as far as actions against the McWorld go – whether physical or metaphysical – these are unquestionably some of the most potent! 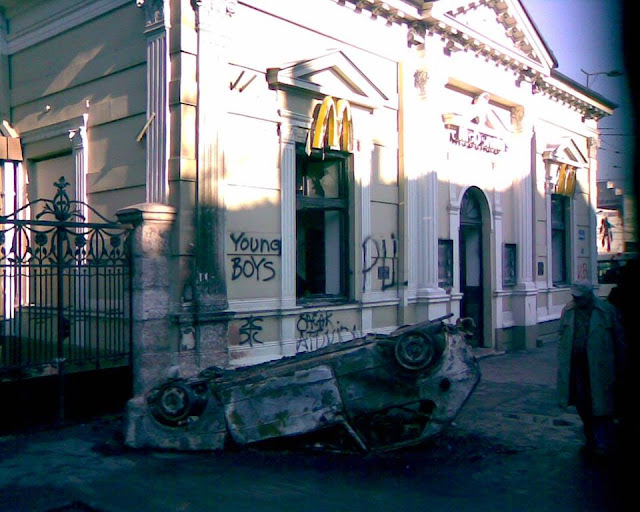 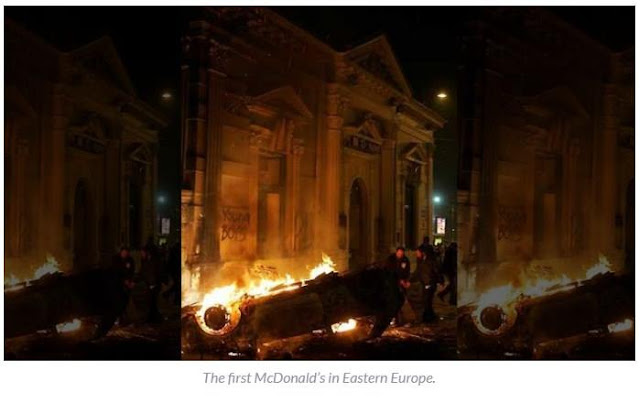 Curwen Ares Rolinson has endured almost a decadeÔÇÖs worth of experience at the highest levels of New Zealand Politics; serving as a prominent public face of left-nationalism in his home country before making the transition to political journalism and work in the PR field. His writing has been published in a wide array of outlets ÔÇô ranging from his award-winning ÔÇ£Sex, Drugs & Electoral RollsÔÇØ magazine column, as well as the Official Gazette of the Bolivarian Republic of Venezuela. He's a regular contributor at Fort Russ News since 2016.

EURASIANISM PROVIDES THE INTERDISCIPLINARY APPROACH WHICH WE NEED