By Ronald Thomas West – The Russian propaganda method? When it comes to aiming their story at the liberal democracies audience, it could not be more simple; more often than not report the actual facts in the geopolitical contest and when this is inconvenient, the preferred option would be to practice lies by omission. In the main, this works because of the Western press co-option by multinational corporate interests (read intelligence agencies’ information operations) has so totally removed their readers from the actuality of what is going on, generally speaking there is no pressing need to present a false portrait of reality versus the corrupt nature of the Atlanticists and their sordid behaviors. But, there are exceptions, and in the case presented in short here, a case of exceptional stupidity or, an incredible misapprehension of the Western mentality.

One of the propaganda techniques I time to time notice practiced by Russia is what I call ‘the flip’ or, where the Russians take a Western propaganda lie and flip it back onto itself. This should cross the line of any principled ethicist, as truth is not served in a case of re-engineering a lie but rather sets up perversion of justice that must haunt when the altered reality corrects itself.

Such could easily be the case of the Russians’ most recent pronouncements on the downing of Malaysia flight MH17 over the Donbass region of what had been Ukraine (but now are the separatist & de facto Republics of Novorossiya.)

Recently the ‘JIT’, the utterly politicized and corrupt Joint Investigative Team which includes the neo-nazi regime in Kiev and excludes Russia, had presented photographic evidence of the Buk surface to air missile debris the team claims brought down the airliner, complete with serial number. The Russian reaction? Simply to look up the serial number and determine that particular missile had been delivered to the Carpathian region (Western frontier) of the Soviet Socialist Republic of Ukraine. The missile was then inherited by the new nation of Ukraine when the Soviet Union broke up and belonged to the Ukrainian military. Consequently Sputnik reports (The Russian military quotes in double quotation marks, Sputnik commentary or ‘spin’ in bold)

“”On May 24, 2018, a briefing was held by representatives of the Joint Investigation Team, during which fragments of the engine and nozzle of the missile of the Buk missile system were demonstrated. According to the investigators, the Malaysian MH17 Boeing was downed on July 17, 2014. At the same time, attention was drawn to the numbers of these components of the 9M38 missile, which you can see on the slide,” Lt. Gen. Nikolai Parshin said

“”Separately, I will stop on the military unit 20152, where the missile with the number 886847349 was put, its real name is 221 anti-aircraft missile brigade … By the decree of the president of Ukraine this unit was renamed into 223 anti-aircraft missile regiment. Currently, this unit is located in the city of Stryi of the Lviv region, they still have the Buk systems. It is noteworthy, that units of the 223 regiment, since 2014, have repeatedly been involved in the so-called anti-terror operation in Donetsk and Lugansk regions,” Lt. Gen. Parshin said””

“The Russian Ministry of Defense reported Monday that the documentation for the Buk missile is still stored at the Dolgoprudny plant, where it was built. The ministry also announced that the Joint International Investigation Team can examine declassified documents on the missile, as Russia had sent the new data on the issue to the Netherlands”

“”This is a set of technical documentation that is filled at the manufacturing plant for each manufactured product and stored there, regardless of whether it is in Russia or abroad. Among the documents presented to you is a passport for the nozzle cluster 9D13105000 No. 8-30-113,” Lt. Gen. Nikolai Parshin, the head of the Main Missile and Artillery Directorate told a media briefing”

“The Defense Ministry also showed the document for the engine of the missile 9D131 with the serial number 8869032.

“”As can be seen on the slide, the numbers of components of the 9M38 missile and the number of units noted in the technical documentation stored at the Dolgoprudny Research and Production Enterprise and those presented at the briefing today, are identical,” Parshin said”

Note the Russian military was careful not to state the missile in question was used to down MH17. Only Sputnik makes that claim (per the material presented in the Sputnik article.) Why is this an important distinction?

Because the Russian military knows MH17 was not downed by a Buk but a SU-25 combat jet (and has provided the relevant radar data previous to this.)

What Sputnik has done is ‘flip’ the presentation by the JIT of missile debris or that is to say if the liberal democracies wish to claim the missile debris presented is behind the cause of MH17’s destruction, then this results in Ukraine having downed the plane with the Buk missile. But in actuality all that has been proven is Ukraine had been in possession of the missile assigned responsibility by the JIT. Planting and presenting that debris would be as simple as detonating a Russian BUILT (not possessed) Buk under test conditions, for instance launched at a target drone over a scrubbed field at 300 meters height such as you would see at White Sands Missile Range in New Mexico and pick up the pieces.

I’d sat in the bleacher at the White Sands location to watch an Improved Hawk (analog to the Buk system) down a drone during my own military days, just as proposed, a 2 miles distance (more horizontal than vertical) shot. Manufacturing the Buk ‘evidence’ would only require possession of a Buk missile and the facility to explode and collect the debris, all within the Ukrainian competence. Relevant to this, Dutch intelligence has a long history of ‘technical support’ (creating and/or laundering faked evidence) for CIA and related Western intelligence operations (according to rogue CIA officer Phillip Agee) and certainly these days for the JIT, which recalls a precedent for false flag downing of airliners with fabricated/planted evidence belongs to the liberal democracies’ fraternal brothers FBI/CIA in the Lockerbie case. It’s oftentimes not a friendly world at the underbelly of geopolitics.

What Sputnik failed to realize is, when they threw the experts and associated preponderance of the evidence pointing to the SU-25 downing MH17 under the bus, Russian propaganda exposed itself as perpetrating a world class lie. Does it matter this ‘flipped’ lie originated with the JIT? To quote former Pentagon liaison to the CIA (whistle-blower) L. Fletcher Prouty: “The American people and world of Arnold Toynbee would prefer truth.”

All that was needed was to say ‘the missile ALLEGED by the JIT to have brought down MH17 has this paperwork history’ presented by Moscow, to effect the JIT incriminating itself. But Sputnik’s propaganda artists couldn’t miss the opportunity to ‘flip’ false evidence and assign blame in such a way as to further poison the narrative and consequently pervert the truth of Russia’s just cause. Many honest Western experts and  independent journalists might be expected to make a mental note of this; to the discredit of, and possible reluctance to do future interviews with, Russian media.

Sputnik & RT editor-in-chief Margarita Simonyan, supposedly expert in aiming propaganda at the West, is without question a state intelligence asset. She should have known better and the Russians could do better. 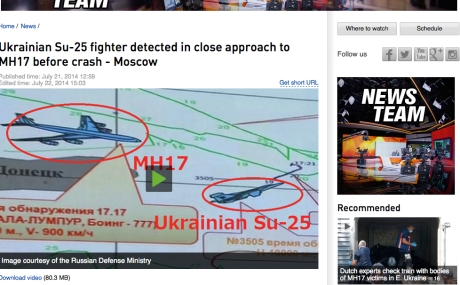 It is also possible the JIT has folded and Russia has allowed a face-saving (falsely constructed) compromise where Ukrainian ‘incompetence’ led to the downing of MH17 with a Buk or, Russia is creating an opening for the JIT allowing for the same.

A former Special Forces Sergeant of Operations and Intelligence, Ronald Thomas West is a retired investigator (living in exile) whose work focus had been anti-corruption. Ronald is published in International Law as a layman (The Mueller-Wilson Report, co-authored with Dr Mark D Cole) and has been adjunct professor of American Constitutional Law at Johannes Gutenberg University, Mainz, Germany (for English credit, summer semester 2008.) Ronald’s formal educational background (no degree) is social psychology. His therapeutic device is satire.