Has the annoying Russophobic Troll decided to up his game?

[ English press has really lost whatever was somewhat left of its collective mind with this absolutely incredulous story from an ‘Alex King’ and his wife. Is this the same Alex King who’s a die-hard Pravy Sektor supporter, and who’s trolled on Twitter and other social media platforms for some time? FRN presents Texas Bentley’s latest piece, a light-hearted one not lacking a bit in humor, but at the same time the story being put together indeed may be the right one. With ‘Salisbury’ taking headlines, and the ludicrous charges made against Russia that they would have any motive to eliminate the Skripals, and even if so, to use such a method, is beyond the pale. It was only a matter of time that some fame-whores would pop up for their 15 minutes of fame.  NB: FRN has no hate for anyone engaged in any body-positive trans-humanist modifications, or for honest prostitutes, and the author presents his own ideas and represents his own views, as is the standard case at FRN. – ed J. Flores ]

Is “Alex King”, the drug dealer with hooker wife who recently rat poisoned himself in a  Salibury toilet the exact same “Alex King” behind “Glasnost Gone”?  Highly Likely! 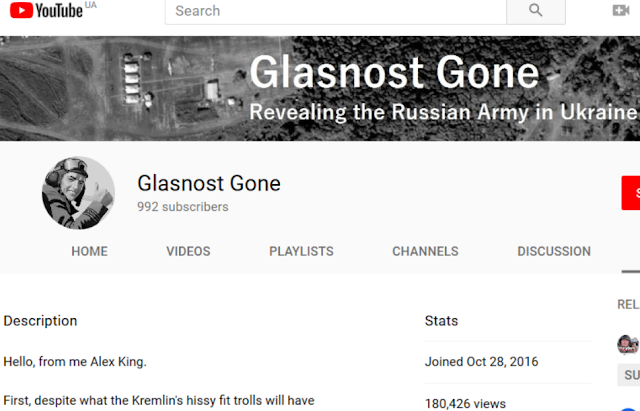 When did Monty Python take over MI-5 and Scotland Yard? Seems like it was a while ago, but this latest comedy sketch is really over the top. Yet another Salisbury poisoning, this time featuring a Russian/Israeli hooker and her husband, “Alex King”, who either is, or at least shares the same name with, a rabidly anti-Russian propagandist and professional liar, “Alex King”, who produces 100% bullshit on Twitter and Youtube under the pseudonym “Glasnost Gone”.  If it turns out to be the same Alex King/Glasnost Gone, it is guaranteed that he and his hooker wife did it to themselves as a ploy for publicity, attention and money. With, of course, the connivance of the British government and press, either before or probably after the fact.

Is the same name a coincidence? Maybe, but I doubt it. And I bet that the Alex King who produces vile tripe as “Glasnost Gone” is the same dude found foaming on the floor of a men’s room in a Salisbury pizzaria. This dude, and his hooker wife – 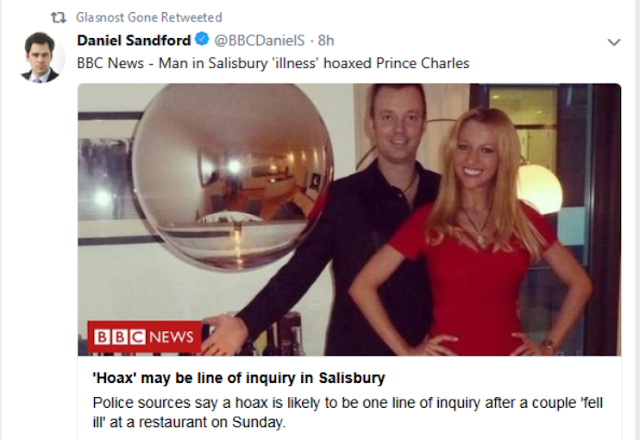 The ex-Russian, now Israeli citizen Anna Shapiro, is billed by The Sun as an “ex-model”. Well, exactly what agency was she represented by? Let’s see some pics from her professional portfolio, some ads her photo was in, some magazine covers. No, seriously. Let’s see. 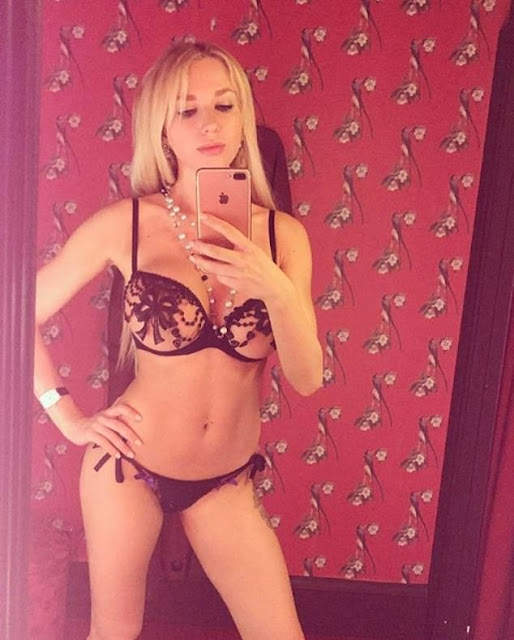 You could have seen many more of her photos like the one above in this article by The Sun, but it has now been deleted. Note the (lack of) professionalism and production values of the photo above as well as her fake tits and lips, and her 5 o’clock shadow. Model? Hooker. This may well be the girl heard romping with Petrov and Boshirov in the hotel when the Skripals were actually poisoned.

Hell, maybe she did it. 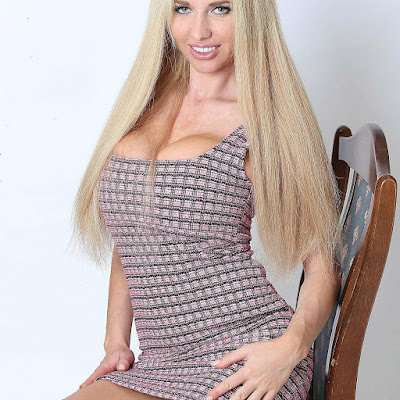 “The Sun” is the British equivalent of The Weekly World News in the U.S. The Sun is the sine qua non, ne plus ultra, the abso-fucking-lutely perfect example of Fleet Street perfidy. Fleet Street, the heart and birthplace of British “journalism”, is known for the barber, Sweeny Todd, and for its “yellow journalism” which I prefer to simply call “Urinalism”, because it’s yellow, and hardly fit to wipe the floor of the toilet upon which Alex King was found. Sweeny Todd was known for doing to his customers what Fleet Street “journalists” do to the truth. Just like the Alex King who produces pro-nazi, anti-Russian propaganda under the name “Glasnost Gone”. I’m betting both Alex’s are  100% the same. Highly likely, indeed.

Alex King has been working for years as an anti-Russian propagandist. He started out as a fanboy of Nadia Shevchenko, the convicted murderer, mental case and triple turn-coat. When she was imprisoned by the Kiev regime, after being a “Hero of Ukraine” and member of the Ukrainian Verkona Rada national parliament, King’s fervor waned, and he began his career as a junior Bellingcat wanna-be, creating demonstrably false propaganda vids pretending to show “Russian occupation” of Ukraine. His videos have never been taken seriously by ANY real media, and after spending the last few years begging for financial support for his work, he has finally hit the big time. (On the floor of a men’s toilet in Salisbury. Congrats, Alex, must be your destiny…)

It is easy enough to imagine the conversation – King’s new hooker wife lays down the law – “You start bringing in more money, or I’m going back to work!” In desperation, King comes up with a plan – “We’ll go to Salisbury, have dinner, I’ll have a (non-fatal) portion of rat poison for dessert, go to the toilet, where you’ll find me writhing on the floor, we’ll blame Putin himself, and be rich and famous, like Bellingcat or Pussy Riot”. His loving wife responds, “OK, but you better take enough poison to make it look good”. 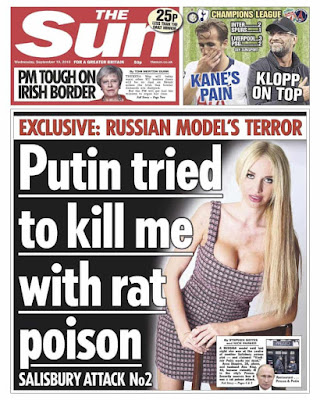 They Blamed Putin Himself… So did The Sun.

How can I know this? Well, me and “Glasnost Gone Alex King” go way back. He has made multiple propaganda hitpiece videos about me, as well as other corespondents working in Donbass. His aim is to try to disrupt the financial support I get from friends and supporters in the West, and he’s actually trying to get the British government to charge Graham Phillips with terrorism. He uses lies, innuendo, fake editing and sensationalistic bullshit to try to shut down open and honest reporting from Donbass. So, the Alex King who is behind Glasnost Gone is a lying, attention-seeking, under-handed low-life scumbag, just like the Alex King found in the Salisbury toilet.  Coincidence? Maybe, maybe not.

I’ve been in touch with Graham about the case, and he does not think it is the same Alex King, pointing out that Glasnost Gone has continued “tweeting” even as the Alex found in the toilet was supposedly still in a coma. True, but it is, indeed, highly likely that the hooker wife and other accomplices have the password to the Glasnost Gone Twitter account too, and could be tweeting in his stead, trying to salvage the reputation of their last meal ticket by pretending it is a different Alex King. On the day after King was taken from the toilet to the hospital, there were 32 “Tweets” by the Glasnost Gone account. Only one single post mentioned the Salisbury incident. Posted about 14 hours after the first reports, while King was still in the hospital, supposedly still in a coma, it says “For God’s sake, STOP talking about #Salisbury”. I wonder why. What did Glasnost know that even the cops didn’t, less than fourteen hours after the “poisoning” ? (NOTE – Twitter time stamp on first reports around 12:45 PM Sept 16th, Glasnost post below, 03:12 AM Sept 17th.) 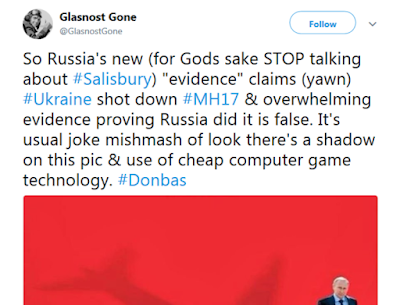 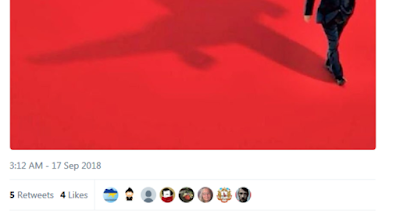 The Glasnost Gone Alex King has never publicized a photo of himself, or even used his own voice to narrate his propaganda videos. For someone who claims to be showing “the truth”, he certainly takes every precaution to hide his identity and guard his anonymity. Almost as if he had something in his past he didn’t want known.  Like, perhaps being a coke dealer with a hooker wife? One and the same? Proven? No. Possible? Yes. So… HIGHLY LIKELY!!!

Sure, there is more than one Alex King from London, just as there are several Russell Bentleys in London too. But it is easy to tell that none of those Russell Bentleys is the one who fought nazis in Donbass. On the other hand, the “Toilet Alex King” and the “Twitter Alex King” do have an uncanny number of similarities – Rabid anti-Russian? Check. Professional liar? Check. Attention-seeking weasel? Check. Craven ass-kisser and obsequious lickspittle to those with money or power? Check. (See Glasnost tweets to Judith Gough, UK ambassador to Ukraine.) Tries to destroy the reputation and livelihood of others by lies and innuendo? Check. Weird infatuation with masculine looking Slavic women? Check. Is it all a coincidence? Let’s check!

Well, we could ask the Metropolitan Police, “London’s Finest”, but considering the fact that they have a 90% failure rate in solving crimes, this mystery might be beyond their capabilities. How about the British press? Surely with all this coverage, some industrious reporter would mention that King was a full-time anti-Russian propagandist. No mention, as of yet. But the poisoning story is already unraveling on its own. The Telegraph has already published the seamy backstory of King and his wife, the fraud, the sex parties, the fake names ( Alex King/Alex Ainley – Anna Shapiro / Chana Shapiro / Anna Webb) the failed businesses, and the surprisingly candid comment from the local cops

” Wiltshire Police issued a statement on Tuesday night saying their illness was “not being treated as suspicious” but that inquiries were continuing. A police source said: “The only thing we can say is the majority of the newspaper’s report can be ignored.”

Well, the coppers seem pretty confident that they’ve gotten to the bottom of this particular case. Congratulations, Bobbies! 10% +1! And now even the illustrious BBCseems to have figured out that Alex King is a fraud. The question remains – is the rat poisoned toilet fraud Alex King the same as the Glasnost Gone disinfo fraud Alex King?

Here’s how to find out – you can ask Glasnost Gone himself on Twitter (if you have an account. I’m banned.)  or leave a question in the comment section of his Youtube videos.  Or you might ask the BBC’s Daniel Sandford.  He seems to know quite a bit about the rat poisoned King, perhaps he knows Glasnost Gone as well. Both Sandford and Glasnost King are pro-nazi propagandists who have covered the coup in Ukraine. (With bullshit.) Would they know each other, and would Sandford know if the two Kings are one and the same? Highly likely! And I know for a fact that Sam Bright (Ex-BBC) knows Glasnost Alex, and can say if he is the same or different Alex Kings. Again, if you have a Twitter account, ASK HIM. Let’s ask, and keep asking till we get a clear answer. I say that Toilet King and Glasnost King are the same person, but it is possible that I am wrong.  If I am wrong, and they are two completely different lying, scamming scumbag frauds, well, I guess I might owe them both an apology.  But that’s NOT likely.

How to do Business at Protests, ‘Newbie’ or Self-Promotion?