A CLASSIC 'WAG THE DOG' AS POROSHENKO'S POLL NUMBERS DROP

Published on: Oct 14, 2018 @ 11:04 – The situation is worsening: the Ukrainian army has begun to using tanks, but continues to suffer losses. The UAF is in no shape to carry out a real offensive, but it must use violence to distract from the real social collapse inside Ukraine. Poroshenko is projected to lose the upcoming election, with Tymoshenko – running on a no-doubt cynical campaign of anti-corruption (she has herself already been convicted!) and ‘reasonableness’ (a change of ‘tone’, not policy) with Russia – low leading by a figure approaching double digits in pre-election scientific polling.

If the number of attacks last week was about the same as last week, then the calibers used are significantly enlarged.

In just one week, the UAF bombarded the DPR 156 times, and the LPR 40 times. And if last week the VSU used a 171 mine and projectile against the DPR, then this week already 400, and tanks were already used.

Shelling in the LPR has greatly increased, from 26 times last week to 40 times this time. The UAF used artillary and tanks also against Lugansk. 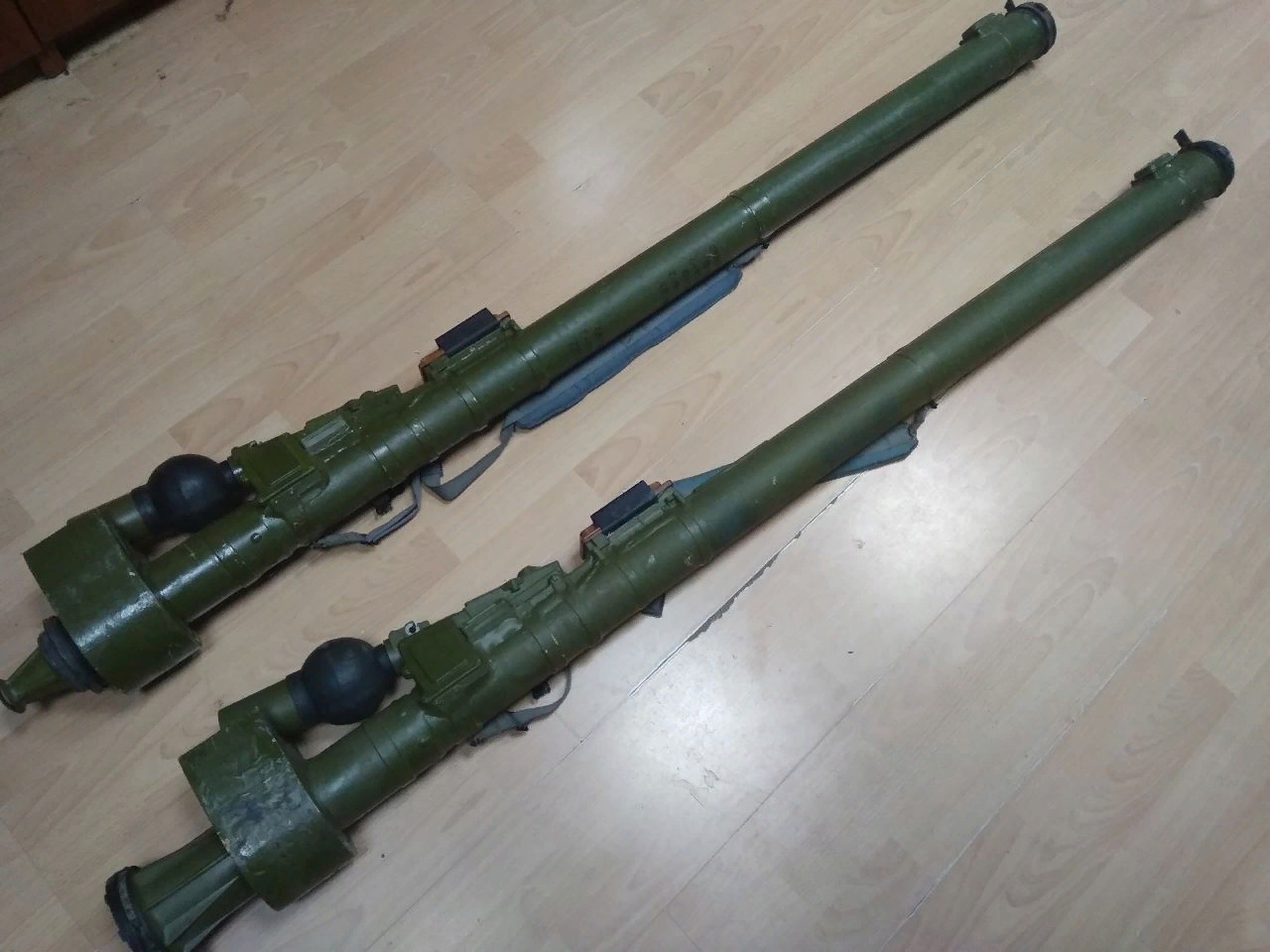 Unfortunately, there were victims. Three children were killed and two children were injured in the DPR. Also, the losses were among the servicemen of the National Assembly of the DPR, two soldiers were killed.

Trump and Poroshenko spoke at the UN, and no offensive happened, but, as you see, the situation at the front continues to get complicated.

The UAF acts without constraint using not only mortars, but also tanks and artillery. This situation will only get worse, since the election campaign has begun in Ukraine.

During the week, the air defense posts of the NM of the DPR recorded the activities of ten enemy UAVs, eight of which were marked in the Mariupol direction, where Ukrainian troops were adjusting artillery fire on the houses of civilians.

On September 30, at the checkpoint in the area of ​​Mayorsk controlled by Ukraine, three children were killed and one child was seriously injured as a result of an explosion on an explosive device in a forest clearing.

On September 30, at 17 hours 55 minutes, soldiers of the Ukrainian army, accustomed to impunity, fired upon residential areas and the area of ​​the village of Staromikhaylovka from the weapons of a BMP armoed vehicle.

As a result of the shelling , a 16 year old teenage girl was seriously injured.  The victim was promptly evacuated from the scene of the shelling and taken to a hospital for care.

On September 30, the absence of maps of minefields led to yet another non-combat losses in the ranks of the Armed Forces of Ukraine. Two soldiers of the 15th battalion of the 58th motorized infantry brigade of the Ukrainian Armed Forces became victims of the negligence of their commander.

As a result, soldiers Yarimenko and Slipenko received numerous shrapnel wounds as a result of a blast on their own minefields, and another one of their colleagues was killed.

On October 1, in the area of ​​the settlement of Nizhnee Lozovoe (2 km south of the front line), the NM military personnel of the LPR shot down a Phantom-4 UAV with gunfire from a north-west direction at an altitude of about 300 meters.

In addition to reconnaissance video and photographic equipment, the UAV was equipped with an electromagnetic device for carrying and dropping a hand grenade attached to the bottom of the hull.

After the defeat of the UAV, eyewitnesses observed how the F-1 grenade separated from the “Phantom”, which exploded near the site of its fall. Specialists have determined that this aircraft was manufactured by the American company “Stampede Presentation Products, inc.”.

Later on, by identification number, it became known that this UAV as part of the lot was purchased on July 7, 2018 in the USA and in the middle of August it was placed in the 72nd separate mechanized brigade. 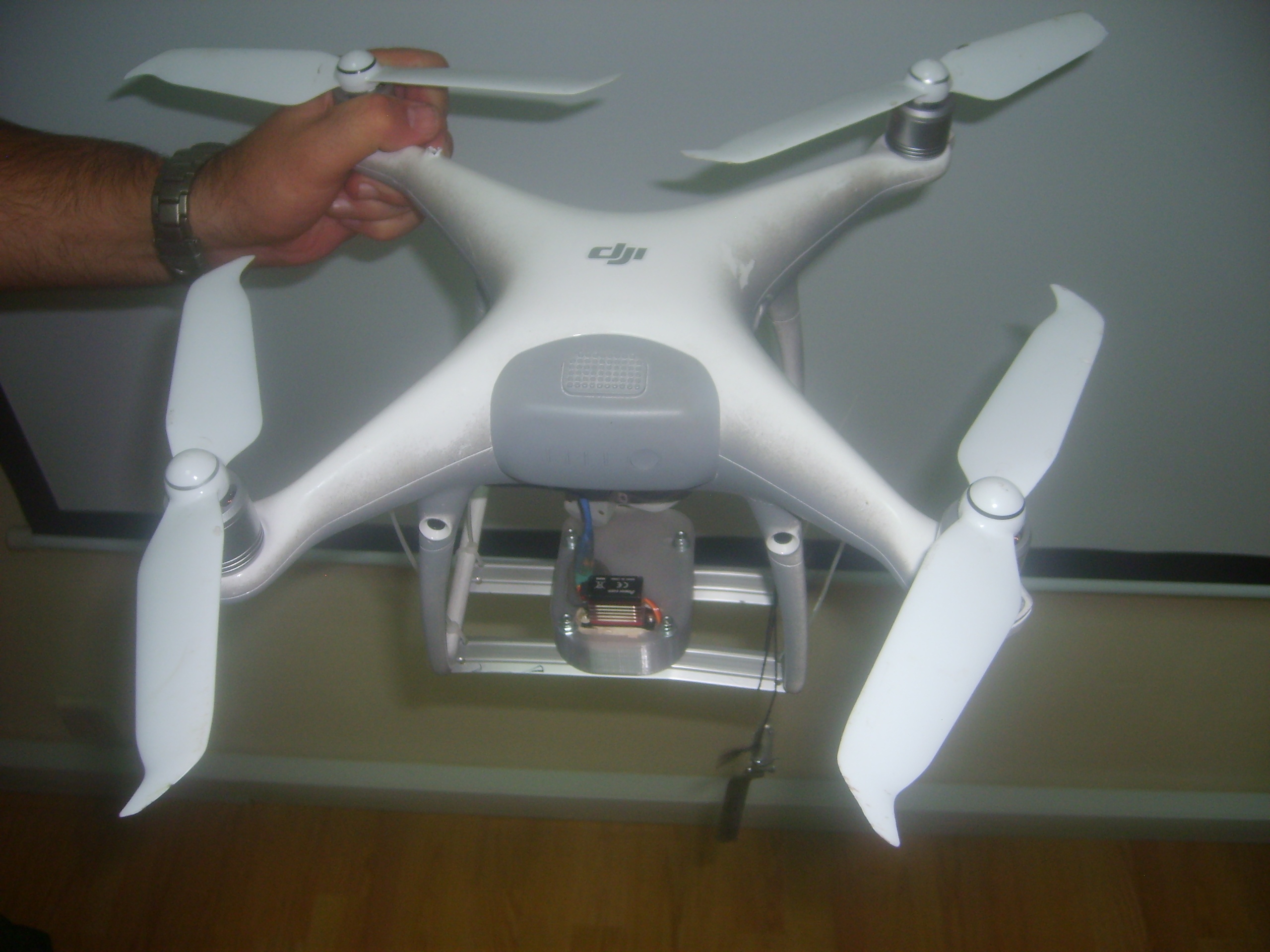 On October 4, in the area of ​​the village of Shumy, as a result of careless handling of weapons, a soldier of the 58th motorized infantry brigade of the Ukrainian Armed Forces junior sergeant Eremenko, born in 1992, received a gunshot wound to the right hip.

On October 4, near the settlement of Marinka, as a result of a grenade explosion to a grenade launcher left at the campfire site, two servicemen of the 28th brigade of the Ukrainian Armed Forces, born in 1985 and 1976, received fragmental wounds of varying degrees of severity.

In the period from October 1 to 4, in the military units and military units of the Armed Forces of Ukraine in the zone “OOS”, audits were conducted under the guidance of the commander of the OTG “Vostok” in order to calculate material losses and reveal the facts of theft.

According to the results of the work of the commission, the absence of weapons and ammunition, spare parts for the restoration of military equipment and fuel and lubricants in the amount of more than 398 million hryvnia. It is noted that the embezzlement and shortages are recorded in all the brigades of the Armed Forces of Ukraine in the “EP” zone, with the majority of the embezzlements being carried out during the period when they perform combat missions.

Among the corrupt command of the brigade of the Armed Forces of Ukraine there are clearly leaders. The most significant facts of loss and theft were noted by commissions in the 56th and 58th motorized infantry brigades and the 36th Marine Brigade.

Supporting documents on the write-off of property by the command of the brigade of the commission is not presented, the location of the property is not established. The acts of inspections and conclusions were transferred to the Main Military Prosecutor’s Office of Ukraine, where, by order of Matios, all materials are classified.

According to the information we have, the commander of the “OOS” Naev is negotiating with the Chief Military Prosecutor of Ukraine Matios about concealing a part of the offenses from the public and media.

The bulk of Ukrainian military equipment and weapons located on the line of contact is regularly reflected in the daily official OSCE reports. At the same time, the formal nature of the attitude of the Ukrainian side to this control can be traced.

Now, as for the battles and shelling that took place in the week. 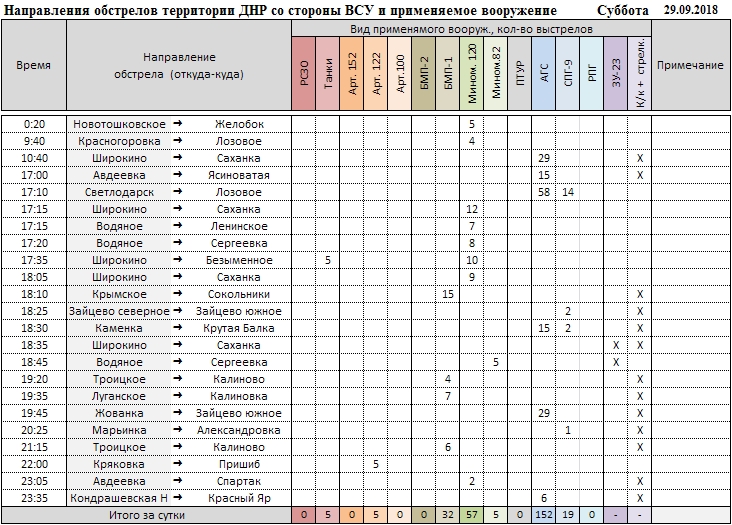 According to the Ministry of Defense of the DPR, on Saturday the Armed Forces of Ukraine fired on the DPR 16 times.

The territory of the LPR was shot at 9 times.

The engineers of the People’s Militia examined the territory near n. Rajkovka and Merry Mountain 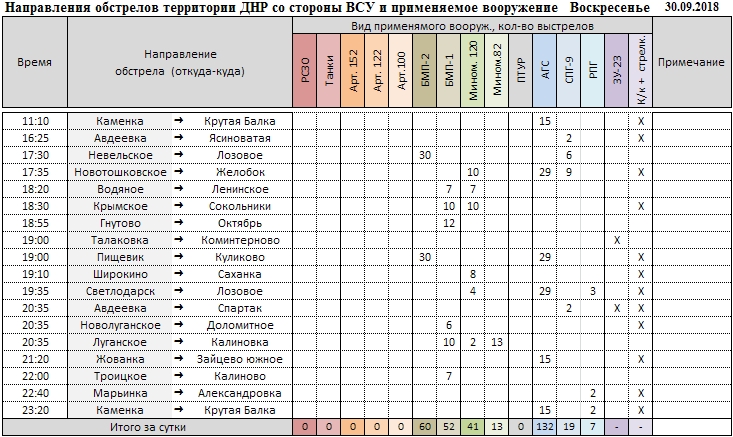 According to the Ministry of Defense of the DPR, on Sunday, the Armed Forces of Ukraine fired on the DPR 20 times, two servicemen of the DPR were killed

On this day, three were killed and two children were injured.

During the day, the Armed Forces of Ukraine were fired at the LPR.

NM DNR and “Angel” restore the destroyed houses in Kominternovo 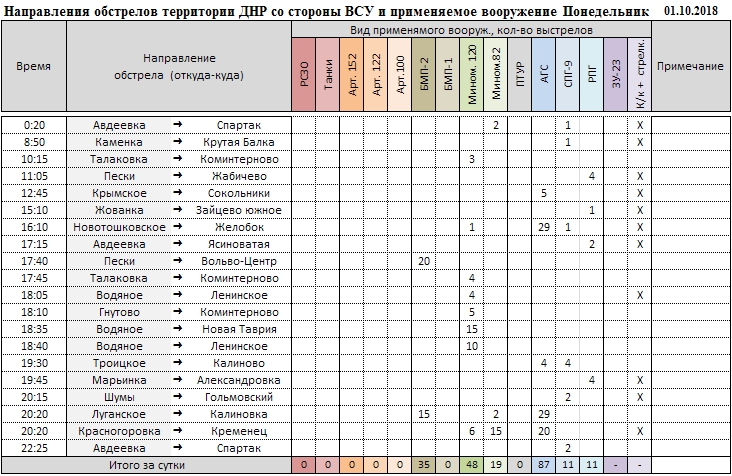 On Monday, the Ukrainian Armed Forces fired on the DPR 20 times, and the LPR 5 times. 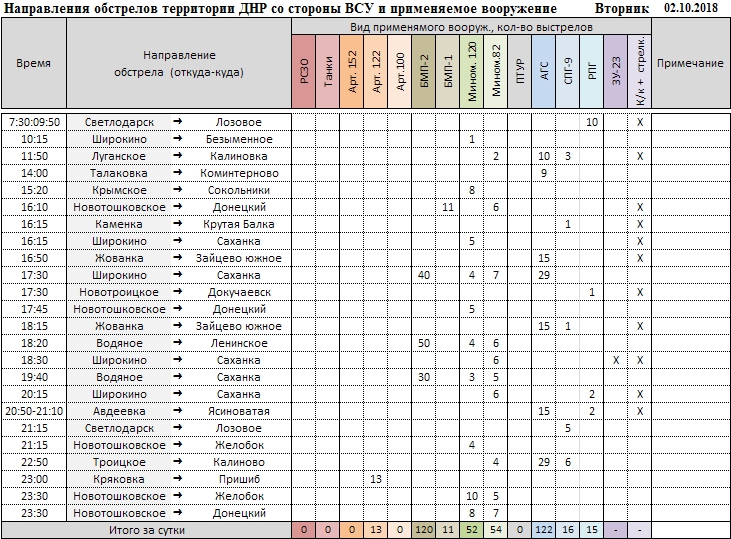 On Tuesday, the Ukrainian Armed Forces fired on the DPR 19 times, and the LPR 12 times. 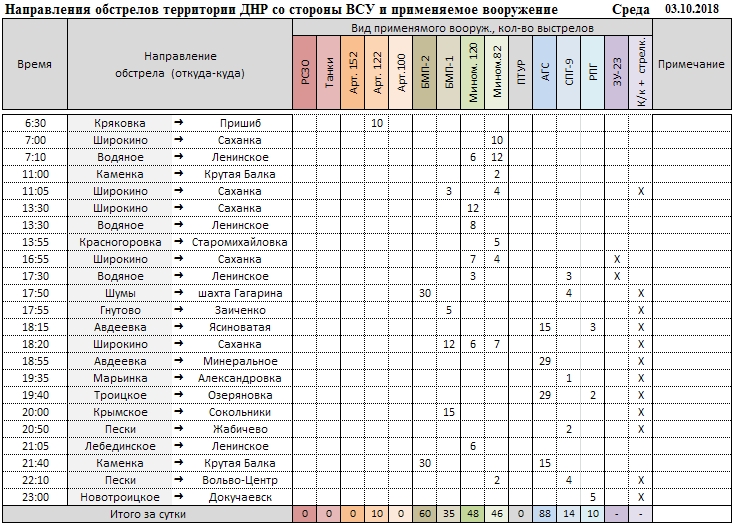 During the day, the Armed Forces of Ukraine the territory of the DPR was subjected to 25 shelling, the LPR – two.

Humanitarian aid from NM of the LNR was delivered to the kindergarten of the settlement. Bold

Teachers remember children who blew up on the Ukrainian shell 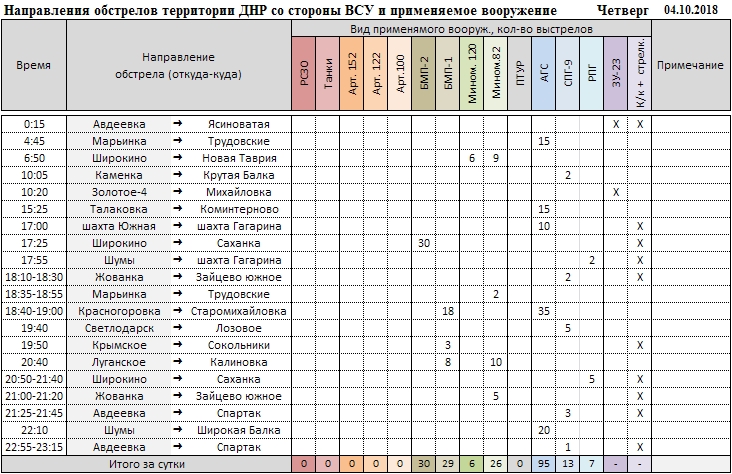 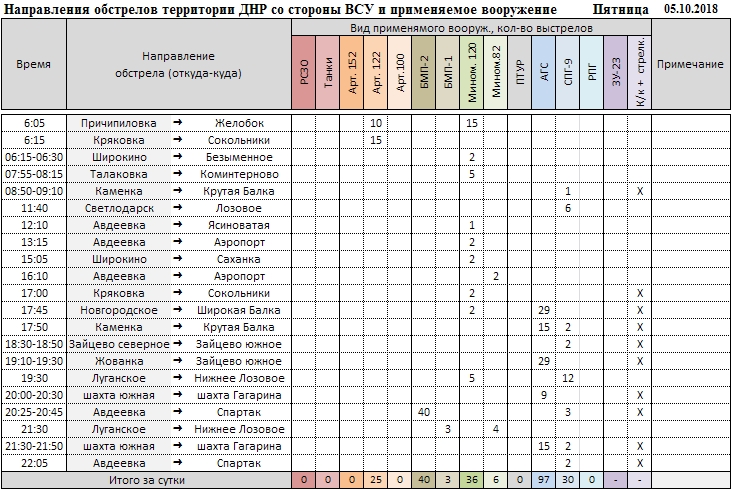 On Friday, the Ukrainian Armed Forces fired on the DPR 21 times, a civilian was injured in 1963.

The LC was bombarded on Friday 6 times.

The enemy fired at DNI 156 times. Two servicemen of the DPR were killed, three died and two children were injured.

In the areas of twenty-two settlements of the Republic, the enemy fired more than 400 rounds with a caliber of 82 mm and 120 mm, used weapons of infantry fighting vehicles, various types of grenade launchers, large-caliber machine guns and small arms.

The Ukrainian Armed Forces fired on the LPR 41 times. In the territory of the Republic 1095 rounds, shells and other ammunition were fired.