On the eve of the November 11th elections in Donbass, the mood was tense. Citizens and the people’s militias were aware of credible reports from intelligence, that Ukrainian forces planned to attack on the evening of November 10th or the day of the elections, November 11th. But a massive public media campaign conducted primarily through social media, alternative media, and numerous phone calls from citizens to OSCE representatives, as well as the diligent work of journalists and analysts such as Dr. Popov, turned the tide.

To ensure the peace, and guarantee that the elections were held in a manner described by observers from over 20 countries as ‘free, clean, and transparent’, also invited were observers from member countries of the Organization for Security and Cooperation in Europe (OSCE). They monitored the November 11th elections in the Donetsk and Lugansk People’s Republics (DPR and LPR)

Confirming that the elections were carried out in a manner consistent with democratic procedural norms, the OSCE Permanent Council, Lukashevich, shared information received from elections commissions, observers and media. “The November 11 elections were held in an organized way, calmly, without violations, with a high voter turnout (80% in DPR and 77% in LPR). Residents had an opportunity to choose from five candidates in the Donetsk Region and from four candidates in the Lugansk Region,” he noted.

“The voting process was monitored by observers from over 20 countries, including OSCE member countries (Austria, Belgium, Hungary, Germany, Greece, Italy, Ireland, Canada, the Netherlands, Norway, Poland, Serbia, Turkey, Finland and France), as well as from other countries,” the diplomat added.

Lukashevich explained that in his opinion, the November 11th elections were necessary in order to “fill the power vacuum” after the martyrdom of former DPR head Alexander Zakharchenko.

“In these conditions, Donbass has nothing left other than self-organize with the purpose of ensuring their own survival, livelihood and obligations to people who were abandoned by their country,” the diplomat said. “The elected representatives will receive a mandate to solve practical issues of maintaining normal life in the region, of ensuring the operation of local authorities, of fulfilling social obligations that Kiev refuses to acknowledge,” he added.

Denis Pushilin appears to have won the election in the DPR. He proved to be both a popular and yet  divisive candidate, representing a rift between DPR citizens and a growing perception that Pushilin as a Kremlin backed candidate not only brings some level of Russian assurances, but also Muscovy connections which are perceived as corrupt. At the same time, there were no recorded instances of voter intimidation, it appears that on the whole DPR citizens felt that a candidate which was tacitly approved by the Kremlin and Moscow power-elites, would ensure some ‘investment guarantee’. Pushilin was the least inspiring among actual DPR militia members and revolutionaries; FRN is even aware of some unsourced but nevertheless popular conspiracy theories within the Russian alt-media and blogosphere which tie Pushilin in someway to the assassination of Zakharchenko.

Last week, the number of attacks sharply decreased, but, unfortunately, 122 mm artillery began to be used, and on Friday – 152 mm.

In just one week, the APU fired a the DPR 116 times, and the LPR — 19 times. Unfortunately, although the shelling and decreased, we continue to lose people. This week, one killed and two servicemen wounded . 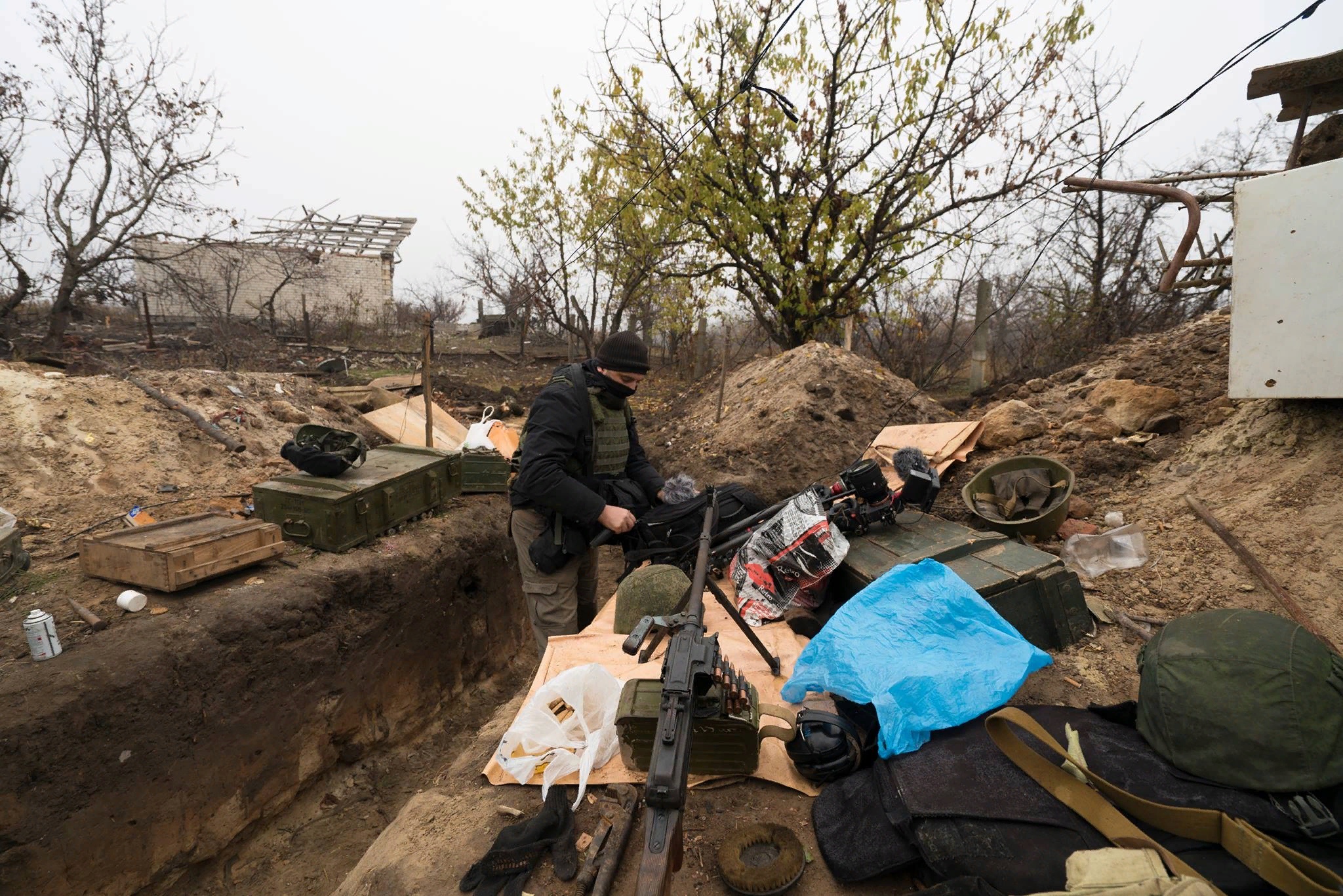 Surprisingly, the shelling has decreased, although the last five weeks have been gradually increasing. It is quite possible that the Ukrainian Armed Forces fear foreign observers who came to elect the heads of the DPR and the LPR.

Over the past week, three enemy UAVs were destroyed by air defense weapons of the NM of the DPR.

Two in the areas of n. Aleksandrovka and Staromikhailovka, where Ukrainian militants carried out fire adjustments during shelling. Another UAV, such as “quadrocopter”, converted into a shock, was destroyed during combat use when dumping incendiary ammunition on the houses of civilians in Mineral.

November 2at night on the positions of the Supreme Court of Ukraine in the area of ​​settlement Krasnogorovka as a result of an explosion on his own mines, a soldier of the 28th brigade of soldiers Kiriyenko was killed. The fighter returned after drinking with his colleagues to the place of service and deviated from the established route.

On November 3rd ,the air defense systems of the people’s’ militia of the DPR prevented another attempt to use a drone group attack in the vicinity of the settlement Sakhanka. At around 5:00 pm the observers recorded the approach of three enemy UAV units, after which concentrated fire was opened on them. Two UAVs were disabled by small arms. In the area of ​​its crash people recorded explosions and a dry-grass fire.

November 4th ,in the area of ​​Kominternovo, during the improvement of the fortifications of the positions of the 79th brigade of the Armed Forces of Ukraine, a mine exploded under 36th brigade soldiers who had previously occupied the specified area.

As a result, one soldier was killed, two were injured by shrapnel.

On November 5, the fighters of the 9th regiment of the NM (people’s militia) of the DPR took out the famous Ukrainian sniper Sergey Igorevich with the call sign “Dzhokonda”. 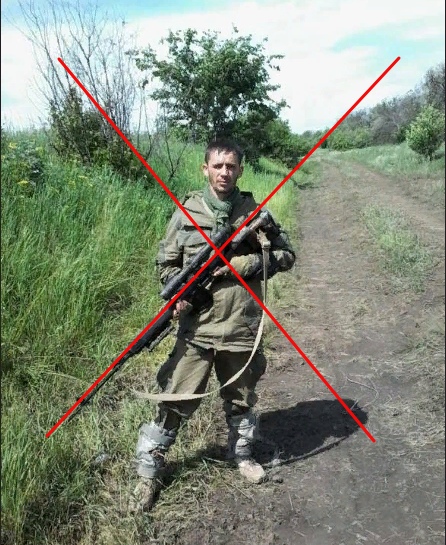 On November 6, in one of the divisions of the 59th OMBr in the region of the settlement of Lower warm as a result of violations of repair work in the fleet, the Ural car rolled off the overpass and collided with two BMP-1s.

As a result, a fracture of the hip bone was received by an ordinary contract service serving infantry fighting vehicles.

On November 6, thanks to the air defense units of the NM of the DPR, the punishers of the 28th brigade of the Armed Forces of Ukraine lost another quadcopter-type UAV used by them to reconnoiter our positions in the Staromhaylovka.

On November 7, themilitants of the 92nd brigade once again attacked the settlement. Mineral using homemade shock drone. Thanks to the coordinated actions of the NM anti-aircraft defense of the NPT, the enemy drone was shot down.

On the video from the flash card of the downed UAV, it is clearly visible how the drone is sent to the residential sector of the settlement, selects the target and drops the explosive device. On November 7, one of the units of the 10th independent mountain-assault brigade of the Armed Forces of Ukraine in the region of the settlement of Shchastya, as a result of careless handling of weapons, lost one soldier.

On November 8, as a result of a tent fire in one of the units of the 72nd OMBR, two people died, four occupants received burns of varying severity.

November 8th in the area of ​​Pishevik, during the setting up of equipment into positions, the troops of the 79th brigade of the Armed Forces of Ukraine unearthed a cache of several boxes of ammunition, in which there were ammunition and RPG shots.

In attempting to open one of the boxes, an explosion occurred. As a result, one soldier died, another one received a concussion.

November 8th in the area of ​​ Starognatovka, 2 km from the positions of the 128th brigade, as a result of a collision with an unidentified explosive device, a car was detonated. As a result, both soldiers in the vehicle died.

On November 8th , a soldier of the 14th OMBR was wounded, received lethal wounds costing his life, as a result of an explosion at a mine-explosive device in his positions in the area of ​​the settlement at Novozvanovka.

We continue to deal with the banned armaments used by Ukrainian forces near the line of military contact:

– in the area of ​​settlement Zamozhnoe (4 km from the front) we revealed the movement of a platoon firing barrel artillery. It was the 79th brigade of the Armed Forces of Ukraine, using 122 mm caliber shells;

– in the area of ​​settlement Dyleyevka (8 km from the front) in the area held by the 58th brigade of the Armed Forces of Ukraine, 3 temporary-fire positions of ACS 2S1 “Gvozdika” of the 122 mm caliber variety were found at temporary firing positions.

Movement of equipment and weapons to strengthen the Ukrainian units were observed:

– in the village Kryakovka, in the area under the command of the 10th independent mountain-assault brigade of the Armed Forces of Ukraine, 2 units of the BTR-80 and 2 units of motor vehicles were registered;

– in the village Mironovsky, in the area of ​​responsibility of the 72th OMB, 5 units of BMP-1 were registered.

The bulk of Ukrainian military equipment and weapons located on the line of contact is regularly reflected in the daily official OSCE reports.

Now, as for the battles and shelling that took place in the week. 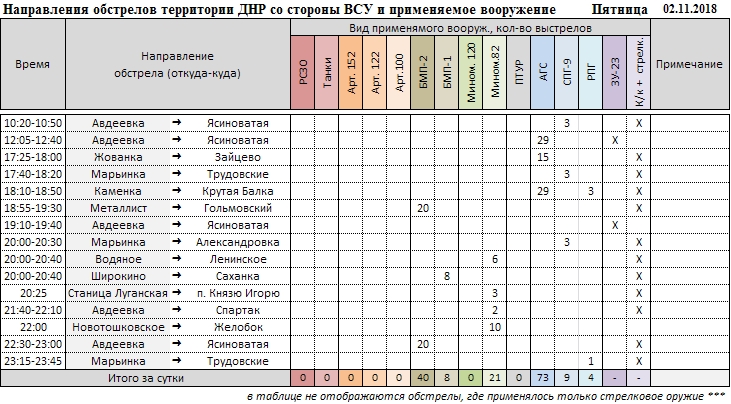 On Friday, the APU fired on the DPR 19 times. The territory of the LPR was shelled 2 times.

Correspondents  came under attack from a Ukrainian drone

On Saturday, the DPR experienced 16 attacks from the Armed Forces of Ukraine, the LPR – 1 attack. 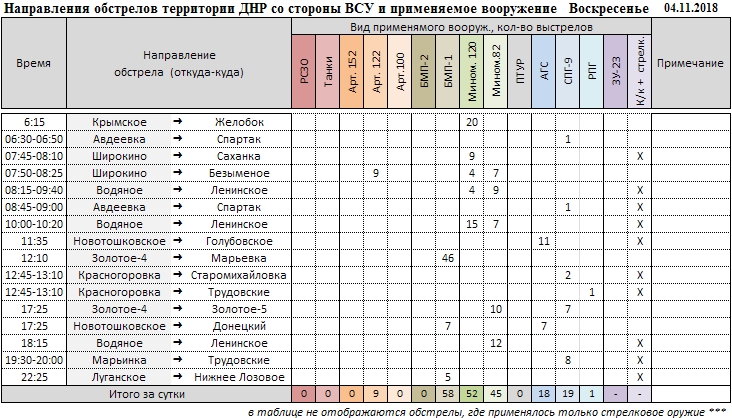 On Sunday, November 4, the Republic withstood shelling – DPR 15 times, in the LPR 6 times.

In honor of the National Unity Day, youth organizations of the LPR honored the memory of the dead militiamen 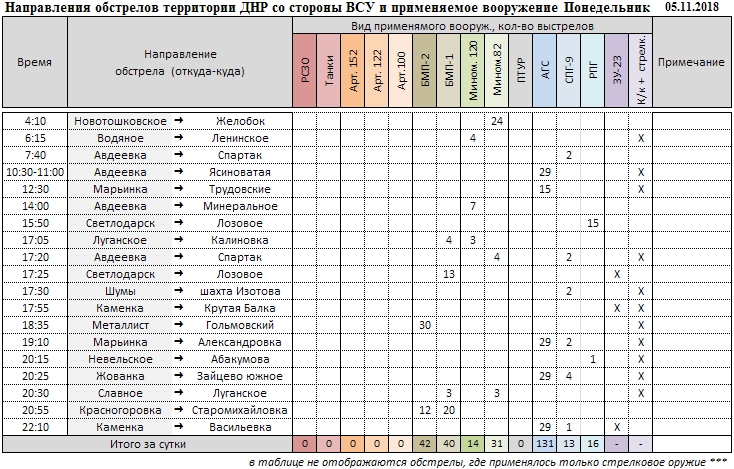 On Monday, the Ukrainian Armed Forces fired on the DPR 17 times.

During the day, the APU fired on LPR 4 times.

Over the past day, the Ukrainian Armed Forces fired on the DPR 16 times.

Over the past day, the Ukrainian Armed Forces did not fire at the LPR.

In the village of Metalist they commemorated dead civilians 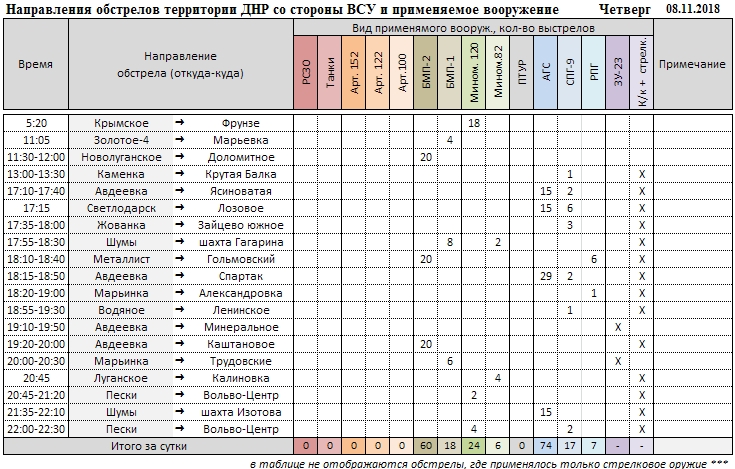 On Thursday, the Ukrainian Armed Forces fired on the DPR 19 times.

In the LPR that day there were shelled 4 times

The APU fired on the DPR 116 times. Killed one and injured two servicemen of the DPR people’s militia.

As a result of shelling from the side of Ukrainian terrorists, four houses in the populated areas were damaged during the week: Trudovskie, Petrovsky district of Donetsk, Yasinovataya, Zaytsevo. Also damaged power lines in the village of the mine “Deep”.

The Ukrainian Armed Forces fired on the LC 19 times. In total, more than 260 mines and shells were fired on the territory of the Republic.