But does Guaidó have a sound legal claim?

US Secretary of State Mike Pompeo called on Venezuelan President Nicolas Maduro to give up the post of dismissed Chairman of the National Assembly (Parliament) Juan Guaidó. 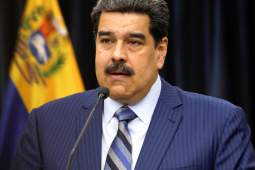 According to the Secretary of State, the people of the country “suffered enough under the destructive dictatorship of Nicolas Maduro, ” reported Interfax on Wednesday, January 23 . Pompeo called Guaidó a legitimate leader who expresses the will of the people of Venezuela.

Pompeo also recalled that US President Donald Trump declared Guaidó the temporary head of state. The Republican noted that the National Assembly declared the election of Nicholas Maduro illegal with reference to the basic law of the country, in connection with which, in the opinion of parliament, the presidency remained vacant.

Earlier on Wednesday, the head of the opposition parliament of Venezuela, Juan Guaidó, was recognized by the Organization of American States as the country’s president. The head of parliament has the recognition of the OAS to start Venezuela’s return to democracy, said the head of the union, Luis Almagro. On the eve of the United States Vice President Michael Pence in a video message expressed support for the protests in Venezuela against the current President Nicolas Maduro.

On May 20, 2018, early presidential elections were held in Venezuela , after which Nicolas Maduro was re-elected for a new six-year term. He took office on January 10, 2019. The generally pro-U.S Lima Group considered that this election did not meet international standards. The document was signed by 13 Latin American countries. It was not signed by 20 countries.

Does Juan Guaidó have a claim?

Guaidó faces numerous, indeed probably insurmountable legal challenges and technicalities which prohibit his illegal ‘declaration’ that he is the ‘acting president’ of the country.

Since 1999, the Venezuelan constitution bars the National Assembly from taking actions with the aim of, or resulting in a vote for, impeachment.

But the National Electoral Council, alongside international monitors from numerous international agencies, found the elections to be relatively free, fair, and clean. They have already ruled that the last election in which Maduro won in 2018, inaugurated last week, to be fair. The electoral process which re-created the Constituent National Assembly (formed to create a popular and socialist constitution in 1999, and brought back in 2017) was also found likewise free and fair by the NEC.

The National Assembly can also not rule on the legalization or finalization of the elections, supervised by the NEC. That is the role of the NEC.

While the opposition, now led by the U.S’ handpicked Guaidó has a majority in the National Assembly, much of their powers are limited by their being short several seats for a required super-majority, but those hypothetical powers would in turn be superseded by by the Constituent National Assembly.

This means that first Guaidó or his supporters would have had to get an appeal through to the courts which overturned the 2017 ruling from the courts, which resulted in the removal of several opposition members from the NA. However, this avenue was previously exhausted, and is closed.

But had that been successful, then proceedings could have been initiated that gave a different direction to the reformation of the CNA, possibly prohibiting its creation. However, even this gambit seemed unlikely to succeed, even with other prohibiting factors out of the way. The CNA has more powers than the NA, once resuscitated – even under somehow limited terms – it would preeminence over the NA.

Ultimately these legal loopholes and fights do not exist with much strength on the theoretical level. What they do accomplish, however, is a word-salad war of vaguely understood legal concepts which can be seized upon by the infamously pro-opposition private media sphere in Venezuela, to prompt and mislead the public into thinking that it is the government that it is out of compliance with some constitutional technicality.

What it amounts to is setting up a fuzzy post-hoc justification for a U.S backed coup. The real power and authority here is the deploying and consolidation of U.S power in Venezuela.

Maduro’s legal claim is air-tight, the claims made by the opposition are legally incoherent and necessarily beg the question. But what can really move things are overt U.S interference.

What happened on January 22nd?

A small group of soldiers were in custody on the 22nd after a failed coup attempt on the 21st in the Venezuelan capital Caracas.

They surrendered after an hour-long standoff with police.

Violence had erupted in the streets, with protesters clashing with security forces. Protest organizations ties to George Soros and other organs of NGO-based U.S soft-power had been long established

The Robert Serra cultural centre, named after a socialist leader, was left a burnt ruin by the ‘non-violent’ protesters – assumedly arson is not a form of violence.

According to a statement released by the armed forces, the soldiers hijacked two military vehicles and stole military weapons.

Right-wing National Assembly president Juan Guaido, who claimed to be the country’s interim president, has promised amnesty to military officials who take up arms against the elected President Nicolas Maduro.

Mr. Guaido has no mass support among the people or the armed forces within Venezuela, although he is backed by U.S. imperialists and right-wing Latin American governments.

Last week U.S. vice-president Mike Pence offered U.S. support to Mr Guiado, telling him in a phone call to him that “the United States will continue to stand strong with the people of Venezuela until democracy and liberty are restored.”

The botched attempt is the latest failed effort to overthrow Mr. Maduro’s government. There was an assassination attempt in Caracas last year and U.S. President Donald Trump was reported to have been considering a ground invasion in the interests of “national security.”

Further sanctions have been threatened from the U.S. and EU to strangle the Venezuelan economy and foment regime change amid accusations of rights violations.

Despite the pressure placed upon Mr. Maduro, he was elected with 67 per cent in last May’s elections, with the closest rival Henri Falcon polling just 21 per cent.

Venezuela’s Ministry of Defence blamed the right-wing opposition groups for the attack, claiming: “With all certainty that these acts are motivated by the dark interests of the extreme right.”

Arab Springcolor revolutionJuan GuaidóMaduroVenzuela
10 2,298
Share
Subscribe to our newsletter
Sign up here to get the latest news, updates and special offers delivered directly to your inbox.