Armenia intends to purchase 12 Su-30SM fighter jets from Russia. This was stated by the press secretary of the Ministry of Defense of the Republic Artsrun Hovhannisyan at the exhibition of weapons IDEX-2019 in Abu Dhabi on February 18. 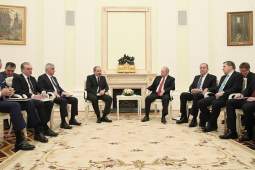 New Year’s compromise: Moscow and Yerevan will continue the course for partnership
An agreement on this was reached during the talks between Vladimir Putin and Nikol Pashinyan in the Kremlin.

According to the head of the department, David Tonoyan, at the end of 2019 – the beginning of 2020 Yerevan will receive four such aircraft from Moscow.

For its part, the U.S’ head of diplomacy, Mike Pompeo, expressed his dismay at the development, commenting that Armenia should not encourage Russian strategic expansionism.

This comes despite a tumultuous past number of years, wherein the U.S attempted to either create, intervene, or exacerbate Armenia’s internal political process, attempting to push Armenia away from Russia through a forcible change of government. This is known both colloquially and in academic and policy circles as a ‘Color Revolution’ or an ‘Arab Spring’. In Russia, it is also referred to as a ‘Maidan’, in reference to the Color Revolution which the U.S staged in Ukraine in 2014. While this change of government occurred, it appears that Washington received less than what they had bargained for.

“Everything will depend on how quickly a given product can be ready – there are issues of import substitution and so on, ” RIA Novosti quotes Tonoyan .

Negotiations on deliveries are continuing within the framework of a loan of $ 100 million allocated by Moscow in 2017, after the implementation of which Yerevan can receive another loan, Tonoyan added.

The possibility of Russia allocating another $ 100 million for military needs of Armenia was allowed by the head of department in early September 2018, without naming the types of weapons that Yerevan plans to buy.

The international exhibition of weapons IDEX-2019 is held in Abu Dhabi from February 17 to 21.

The Su-30SM is a fourth-generation Russian multi-role fighter. Double aircraft is designed to conduct reconnaissance and destruction of air, ground and naval targets both during daylight and at night, including in adverse weather conditions.