DONETSK – As Ukraine enters its election season, violations of the often ignored ceasefire have significantly increased. Today, the Ukrainian military began a round of provocative shelling of the civilian town of Gorlovka. However, in response the DPR militia struck back and annihilated the unit of the Armed Forces of Ukraine in question, DPR spokesman Bezsonov said. 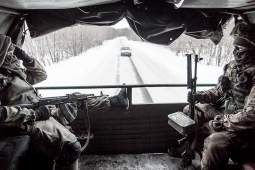 “Pre-election strikes: the number of provocations in the Donbass increased by 1.5 times”
Over the past two weeks, the Ukrainian military has stepped up attacks on the Mariupol and Donetsk area

“The enemy’s firing points were repressed by return fire using weapons not prohibited by the Minsk agreements,” Bezsonov said.

He added that there are no casualties among the militias.

Gorlovka is located on the line of demarcation, 40 km north of Donetsk and is regularly subjected to attacks. The city has the Stirol Chemical Plant and a machine-building plant. The population is about 250 thousand people.

The armed conflict in the south-east of Ukraine has been continuing since the spring of 2014. Residents of the region refused to recognize the U.S backed coup-installed government, which changed in the country in February of 2014 as a result of a coup d’état, and announced the creation of the self-proclaimed Donetsk and Lugansk People’s Republics (DPR and LPR). In response, Kiev began the so-called anti-terrorist operation against them, changing its name in April 2018 to the ‘operation of the joint forces’ (EP in Ukrainian).

Advertisements
crimes against humanityDonbassDPRGorlovkaMinsk IIUAFWar Crimes
0 2,802
Share
Subscribe to our newsletter
Sign up here to get the latest news, updates and special offers delivered directly to your inbox.

Did Clinton Stage a Hoax at Srebrenica ? Eye-Witness Account of a Former United…

Eugenics? Blackmail? Is Ghislaine Maxwell Preparing to Rat on the Billionaire…

CORRUPTION! Records Of Prince Andrew’s Location On Night Of…

Abortionist Who Cuts Unborn Babies’ Vocal Cords So They…

Prev Next 1 of 5,270
Popular Topics
Advertisements