IN DEPTH: Kim and Trump meet today in Vietnam – What should we expect?

HANOI – Today the long-awaited negotiations between the leaders of the United States and the DPRK, Donald Trump and Kim Jong-un, will open in the capital of Vietnam.

Their first meeting in June in Singapore was extremely rich in positive symbolism and poor in concrete results. But if then the leaders were forgiven, then a clear plan of action on denuclearization is expected from the current summit of the heads of the United States and North Korea .

Against the background of Washington’s unwillingness to relax sanctions against Pyongyang and the DPRK’s unwillingness to make substantial concessions to the United States, experts interviewed do not expect any major breakthroughs. But they believe that the agreements will be sufficient to support the further peace negotiations process afloat. And the fact that in order to solve the whole complex of problems, the parties will need more than one meeting, the other day the head of the White House himself acknowledged. 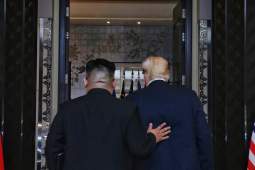 Second date: What is expected from the meeting of the leaders of the United States and the DPRK in Vietnam
Donald Trump and Kim Jong-un summit will not solve global problems, but will support the status quo.

After the June summit of the leaders of the DPRK and the United States in Singapore, Pyongyang demonstrated its goodwill by demolishing structures at the Phungheri nuclear test site, partial analysis of the Sohe missile test site and a couple more small positive gestures. For six months the DPRK anticipated reciprocal concessions from the United States, but they kept themselves waiting. The North Koreans lost patience, continually recalling that “the United States still cannot fulfill the expectations of the DPRK regarding the next step in the direction of signing a peace treaty.”

There were no constructive measures thereafter, indeed there were sudden failures of bilateral meetings. First, Donald Trump canceled the August trip of Secretary of State Mike Pompeo to Pyongyang for the next round of denuclearization talks. And in early November, in the same non-diplomatic manner, Pyongyang was informed that Pompeo’s talks with the head of the United Front Division of the Workers’ Party of Korea, Kim Yong-chol, are being transferred to the United States indefinitely.

Since the new year, the preparation of the meeting between Donald Trump and Kim Jong-un has nevertheless returned to normal. Having coordinated the time and place, the parties concentrated on the summit agenda and the concessions that each of them is ready to offer. 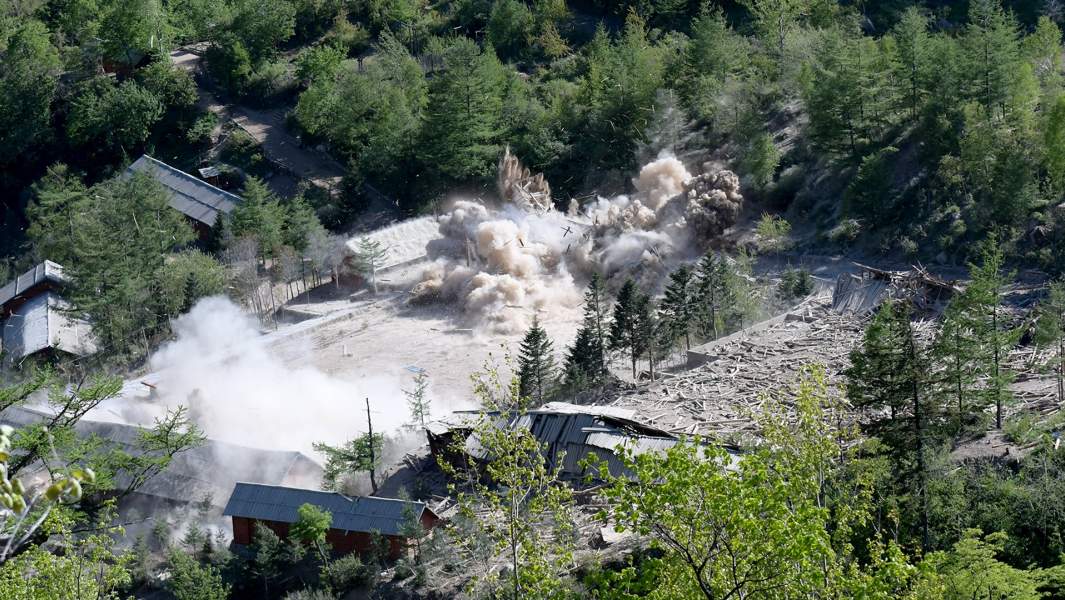 Judging by Western press reports, at Trump’s two-day summit with Kim, which starts on February 27, Washington will offer Pyongyang to open a liaison office in the DPRK (something like a prelude to a full-fledged embassy), and agree also bring an opening for Mount Kumgan and, possibly, the joint industrial park Kaeson, pulling these out of sanctions, for which the South Korean side is very supportive.

In exchange, North Korea is expected to promise to shut down the nuclear reactor in Yongbyon and to completely dismantle the Sohe missile range, which also has, as it is suspected, silo-launchers for interballistic missiles.At the same time, according to The Korea Times, Pyongyang and Washington have already agreed in principle that the IAEA experts will follow the dismantling process.

Although the agency itself  responded in a streamlined fashion: “The controlling role of the IAEA in the DPRK will depend on any political agreement reached between the countries concerned and the permission of the IAEA Board of Governors.”

“The North Koreans will not give other concessions. I think this is due to the desire to bargain for the most advantageous conditions for themselves and, until the last moment, want to wear down their opponents, keep Americans in limbo so that the DPRK leader himself could “give up” something at the meeting” explained Asia Institute of Economics’, George Toloraya. “And this intrigue is precisely the extent to which Kim is prepared for.” 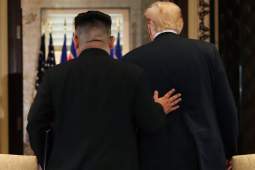 What are their differences?

From the very beginning, the DPRK insisted on the lifting of sanctions against the country, while the United States invariably emphasized that even partial removal of them is possible only after complete, final and verifiable denuclearization.

At the same time, as Donald Trump himself made it clear, the Americans are in no hurry: Washington will not hurry North Korea with denuclearization, while tough measures are applied to the country.“The schedule doesn’t pressure us. I’m not particularly in a hurry. The sanctions continue,” Trump told reporters at the White House a week before the summit with Kim.

Against this background, the US proposals are unlikely to be especially satisfactory to the North Korean side. 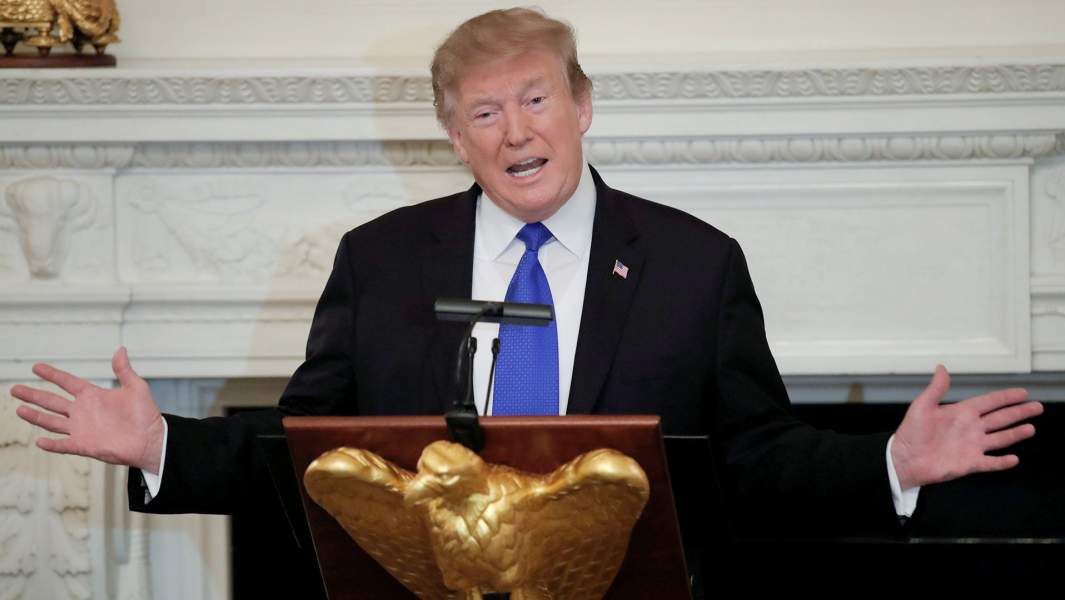 “The peace declaration is not a gift at all, it is a statement of fact. The liaison office is needed more by the Americans themselves; the North Koreans do not need American spies on their territory. And the lifting of sanctions only from inter-Korean projects is too little too late. That would be the North Korean answer,” said Georgi Toloraya.

As the South China Morning Post recently reported, at the talks prior to the summit, US special envoy for Korea Steven Bigan invited Pyongyang to disclose a list of scientists employed in the development of intercontinental ballistic missiles and send them out of the country. According to South Koreans who are actively involved in preparing for the summit, this was an alternative to the early US demand for providing them with a list of all nuclear facilities in North Korea. Pyongyang rejected both claims.

At the same time, against the background of the concerns of the US establishment itself that President Trump might be overly compliant at a meeting with Kim, Congress just a few days before the Hanoi summit voted to ban US financial support for the North Korean regime. An exception was made only to help North Korean defectors, programs to support human rights in the DPRK, as well as for the costs of maintaining a database of so-called North Korean ‘labor camps’.

“There are two likely scenarios” ,the director of the security and international studies program at the National Institute for Political Studies in Tokyo Narushige Michichita explains.

“The first is the “OK scenario ” in which Trump and Kim agree on a step-by-step roadmap of actions to denuclearize North Korea and gradually improve the ties between their countries ,” the expert suggested. “The DPRK will not give up its nuclear weapons, but it will take step-by-step steps, such as freezing the activities of nuclear reactors and admitting inspectors on the ground, to the extent that Mr. Trump is satisfied.

The second scenario , according to Narushige Michichita, can be called ‘bad scenario’: it is possible if Trump decides in response to the promise of denuclearization to award his North Korean counterpart with a significant reduction in the US military in South Korea (28.5 thousand American soldiers are stationed there).

FRN believes that Michichita’s second scenario more closely resembles some of the US strategic thinking. Thirty thousand soldiers is not insignificant, and doesn’t come without significant cost. Trump’s approach mirrors his words to NATO – just as Europe should begin to provide for their own defense, so should South Korea and by extension, Japan. The present 30 thousand US troops are both costly, and yet strategically speaking, a token when compared to the growing military and economic potential of the regions powers. The existing US troops present themselves as a liability, and ‘target practice’ that, if hit, would undoubtedly only serve the purpose of guaranteeing that there would be significant domestic pressure on any US president to draw the US into a pan-Asian war of immense proportions. 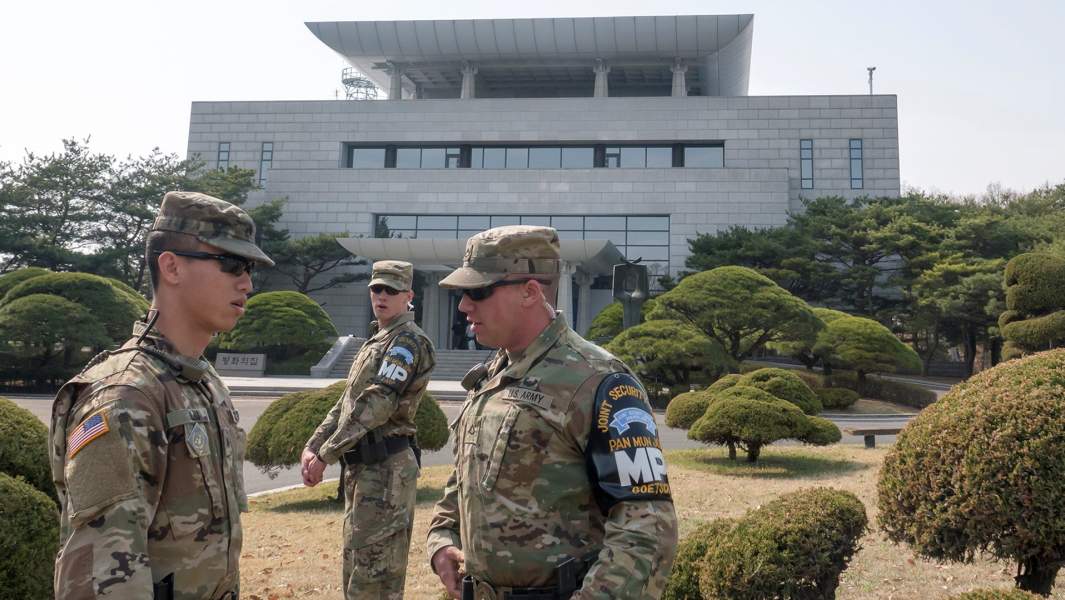 US Army soldiers in the village of Panmunzh 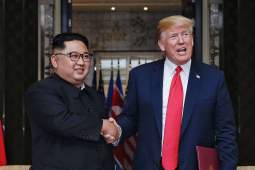 Trump predicts success in the second meeting with Kim Jong-un

Trump himself, who considers the maintenance of troops abroad a burden for the budget, has already hinted at such a possibility. In addition, he has repeatedly demonstrated to the world the manner of announcing any decisions unexpectedly and without coordination with colleagues. For example, following a meeting with Kim Jong-un in Singapore, the US president stunned his own military, saying that the Americans should stop joint maneuvers with South Korea in order not to provoke northerners.

“Expect a little bit of a bad deal,” warned the imperialist British magazine The Economist. According to the results of the second summit, “there will be gigantic progress,” to the contrary, the President of the Republic of Korea, Moon Jae-in, assured the world.

But with all the differences in assessments of today’s meeting of Donald Trump and Kim Jong-un, all, without exception, agree on one thing: denuclearization is a matter of more than one day or even a year, and during the talks in Hanoi the leaders of the DPRK and the United States will hold more than one rendezvous before a comprehensive solution of the DPRK nuclear problem and normalization of bilateral relations. “I don’t think this will be the last meeting,” the head of the White House himself said last week.

All in all, it is unlikely that North Korea will even abandon its nuclear weapons. What it requires is adequate deterrence, and numerous experts have noted that since the collapse of the USSR, the US has only taken military action against countries that do not possess nuclear weapons.

Looking long-term, it would appear that all world events are interconnected, and the deal-making resembles complex horse-trading. FRN approaches the question as this: China agrees that its access to pan-American markets are significantly limited, in exchange for increased Chinese power in the Asia-Pacific region. While many have focused on the possibility that a reunification of the Koreas would happen along South Korea’s economic model of private enterprise, in reality it would signify increased Chinese influence upon both South Korea and Japan – a process already underway and in someways, practically inevitable.

denuclearizationDPRKKim Jong UnNorth KoreasummitTrumpUSA
0
Share
Subscribe to our newsletter
Sign up here to get the latest news, updates and special offers delivered directly to your inbox.

LAVROV: The U.S is Creating a Pretext for Military Intervention in Venezuela