By Joaquin Flores On Mar 27, 2019
0 2,919
Share
BELGRADE – The Serbian state, headed by Vucic, has come under fire once again from the U.S and Albanian proxy occupying government of the unrecognized break-away ‘republic’ of Kosovo.
The construction of the 300-home ‘Sunny Valley’ estate in Zvecan in Kosovo, funded by the Serbian government and Chinese investors, has sparked a political row over a claim that Belgrade is trying to ‘colonise’ the area. Yet Kosovo is a part of Serbia, where Albania and the U.S worked in February of 2008 to hold an unconstitutional referendum to separate Kosovo from Serbia. Today Albanian and U.S occupying forces govern from the region’s largest city, Pristina.

Serbian President Vucic has come under increasing pressure from nationalists both in his party and in the opposition, to take a firmer stance on Kosovo. 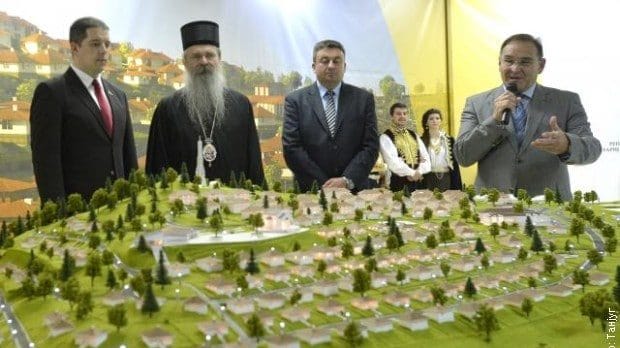 The model of Sunny Valley settlement near Mitrovica. Photo: BIRN.

The main Kosovo Serb party, Srpska Lista (Serbian List), has reacted angrily to a claim that the building of 300 homes in Zvecan in northern Kosovo is a bid to take over the area by rehousing Serbs there. Srpska Lista is regularly attacked by Albanian and American proxy forces connected to the KLA terrorist organization. Its representatives are continually harassed, imprisoned, and their offices ransacked.

Srpska Lista responded to Albanian accusations that Serbs seek to ‘colonize’ Kosovo through this, or any other, project.

“Such a statement represents an example of fascism, especially considering that 247,000 internally displaced persons have been banished from Kosovo and Metohija and that the rate of returns, according to relevant UN organisations, is the lowest of all post-conflict areas on the planet,” Srpska Lista told BIRN.

The accusation of attempted ‘colonization’ are certainly hyperbolic, and stands in contrast to the historical record. The word ‘Kosovo’ as the name of the region is itself is a shortened form of the Serbian words Косово поље (“blackbirds’ field”), from косово (kosovo), possessive form of кос (kos, “blackbird”), and поље (polje, “field”).

Halit Barani, head of the Council for the Defence of Human Rights and Freedoms in nearby Mitrovica in northern Kosovo, sparked the reaction when he told Kosovo newspaper Zeri on Sunday that Belgrade was ‘colonising’ the northern part of Mitrovica and Zvecan by bringing in people from Serbia.

But Srpska Lista insisted that the Serbian government is only trying to provide people with a roof over their heads after they fled their homes after the war in 1999 and during ethnic unrest in 2004.

“On the other hand, 20 years after the conflict, despite the Serbs’ great willingness to return to their homes, the power-holders in Pristina have not provided even minimal living conditions or guaranteed them safety from constant attacks and theft of mobile property and real estate,” the party added.

However, Kosovo Prime Minister Ramush Haradinaj told BIRN that the Kosovo government has built houses for Kosovo Serbs from 2004 onwards, but also before that.

“We want all families in Kosovo to have shelter. But we are aware that Sunny Valley has other dimensions too, besides the humanitarian and civic dimensions,” said Haradinaj.

The 300 new houses in a Sunny Valley are almost finished, Zeri reported on Monday.

They are reported to be capable of accommodating 1,500 inhabitants, and the new estate will also have a church, a kindergarten, a medical clinic and a cultural centre.

A total of 25 million euros is reportedly being invested from Serbia, and Serbian government officials have said that China is also investing in the estate. This initial investment is aimed to spurn numerous private investments from small businesses, to meet the everyday living and commercial needs of the expected 1,500 Serbian inhabitants.

“I Said No” – The Self-Deceit & Defeat of Aleksandar Vucic

Did the Berlin Wall Just Fall in Montenegro?

Will Montenegro Join with Serbia and Russia in Electoral Victory Aftermath?