By Alexander Artamonov – At the exhibition of weapons and related technologies at IDEX-2019, held in Abu Dhabi, the company ZALA AERO, part of the “Kalashnikov” company, demonstrated the army’s unmanned aerial vehicle called “Cube”, which military experts have already dubbed the “kamikaze.”

By its nature, the “Cube” is a high-precision strike complex drone. It can even be launched into the field with a portable catapult. No special skills for targeting are required. In other words, even a first-year soldier will be able to use the “Cube” on the front line after undergoing short-term training. The device is capable of a diving attack from the upper hemisphere, which is indispensable for the defeat of at least tanks.

The device is very light, because it consists of carbon fiber. But with a wing span of 1.2 meters and a length of 95 centimeters, it can carry 3 kilograms of payload, guaranteed to remain in the air for at least half an hour. In essence, such products belong to a special category of aircraft. In the military world, they are already called “anti-ammunition munitions.” In fact, this is a conceptual analogue of a cruise missile: the device bears in memory a map of the area, is able to navigate using GLONASS and maintain a communication channel with the operator.

It should be noted that somehow imperceptibly modern tactics and even the strategy of conducting military actions has changed, having received a new section, which, probably, can be called the “war of drones”. The first quasi-military use of drones, qualified as an interstate incident, occurred in September 2013 in the East China Sea over the Senkaku Archipelago. Then the BLA was used by China. The device entered the disputed airspace. In response, Japan sent the F-15 fighter to intercept the aircraft. Then Tokyo clarified that any appearance of a drone in this region would entail its immediate destruction. Beijing replied that such tactics would be regarded as casus belli (that is, the reason for the beginning of an armed conflict).

The Russian “Cube” has joined the already numerous similar types existing abroad. This series includes devices from the United States, Poland and even Turkey, the products of which Ukraine intends to buy (Kiev announced the possibility of acquiring a Bayraktar TB2 impact drone. And the alleged deal has already been concluded). 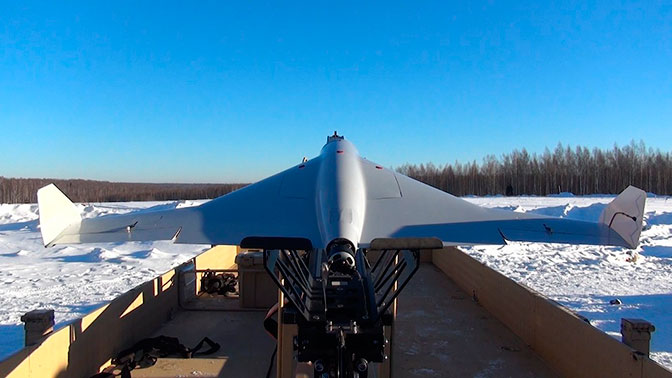 Over the past few years, many drones have already passed their baptism of fire. In general, the massive appearance of UAVs in the theater of military operations for attack – rather than reconnaissance – began after 2010. The trendsetter here was of course is Israel, which once took over the field from the Anglo-Saxons.

The fact is that back in 1959, the United States tested the Gyrodyne QH-50DASH (Drone Anti-Submarine Helicopter) anti-submarine drone. In a modified form, this model was in service with the American army right up to 2006. By the way, the very word drone came from English: it means “drone”, that is, the male of bees. It seems that 60 years ago the drone was so dubbed for the low bass sound that its screws produced – ‘droning’.

Then the baton went to the Middle East, to Israel. The fact is that Israel Aerospace Industries (IAI), the state aircraft manufacturing company of this Middle Eastern state, decided to put this robotic type of armament ahead of all.

This approach was associated with a number of objective factors: the presence of a strong mathematical school in the country and well-developed information technologies, as well as the need to constantly patrol the borders of the Gaza Strip. It is curious that the drones in Israel were often piloted by … autists.

Until recently, UAVs demanded vigilant monitoring and, accordingly, close monitoring of the screens. An ordinary person got tired easily and stopped following the monotonous picture on the monitors. Due to the nature of the psyche, autists are able to show great attention to details and be more attentive when tracking a monotonous series of objects.

So perfected the interaction of the autistic man at the console and the apparatus in the air. Today, drones have become indispensable in Israel, both in the army and in civilian life. They are widely used for the needs of the Ministry of Internal Affairs, the Ministry of Geology, as well as land use services and in the agricultural industry (pollination of fields and observation of crops).

After a rather long evolution of any of the Israeli border drone has a number of mandatory characteristics. It is able to effectively deal with anyone crossing the border, if necessary, destroying them independently, tracking illegal traffic, recognizing terrorists and migrants both inside the country and when its territory is violated. During combat use, the device conducts video recording, which further provides irrefutable evidence of committed illegal acts. 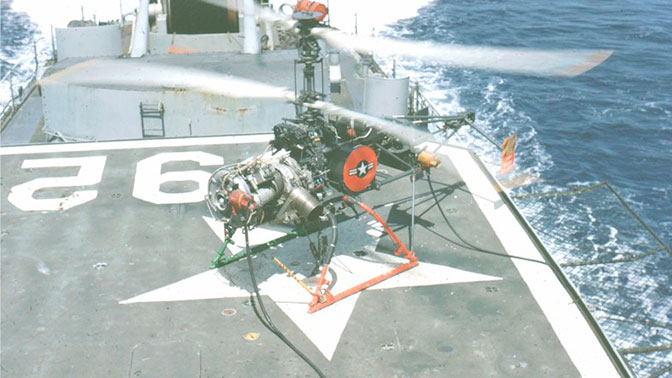 Also the most important achievement of the Israeli electronics engineers is the fully robotic function of detecting and tracking the target.

It turns out that about ten years ago, Israel broke far ahead. The sophisticated software of the devices it uses – including the Green Dragon, Harpy NG and Rotem L  – allows a greater degree of autonomy when making decisions. Now, not a single manufacturer of such equipment can be surprised by the fact that, in case of loss of communication with the base, many UAVs are capable of independent return to the base. Also not uncommon and uncontrolled decision on the use of weapons. This is how, for example, the MQ1 Predator multi-purpose UAV (ie, the “predator” manufactured by General Atomics Aeronautical Systems), developed in 1994, is the oldest of the US product range, successfully used in combat conditions in Iraq and Afghanistan. It can, for example, launch an ATGM by itself.

However, Israel has fallen behind now, only managing to create the IAI Searcher drone, which has the proven ATOL (Automatic Take Off and Landing) function. It is however capable of autonomously performing a full takeoff / landing cycle.

However, all of this robotic technology is not intended for one-time use. It should be noted that only a rich country with advanced information technologies and the production of composite materials (including carbon plastics) is capable of producing this in scale. In order to put such technology into use, years and years of refinement and research are needed.

Russia: a breakthrough from the loss to the front lines

It is curious that even 5-10 years ago, Russia was not considered a state with sufficient potential to create such an advanced and, most importantly, cheap technology. Once, back in 1983, the Yakovlev Design Bureau created a good army reconnaissance drone “Bumblebee-1”, but, unfortunately, after the collapse of the USSR, research in this area was practically curtailed, despite all attempts by the head of the Design Bureau O.F. Demchenko, the current first vice-president and general designer of Irkut PJSC, at least to continue them.

In 2005-2010 Russia only approached the massive use of composites in the field of aircraft construction. Such materials were used in rocket production, but they were absolutely not adapted to the needs of atmospheric aircraft. 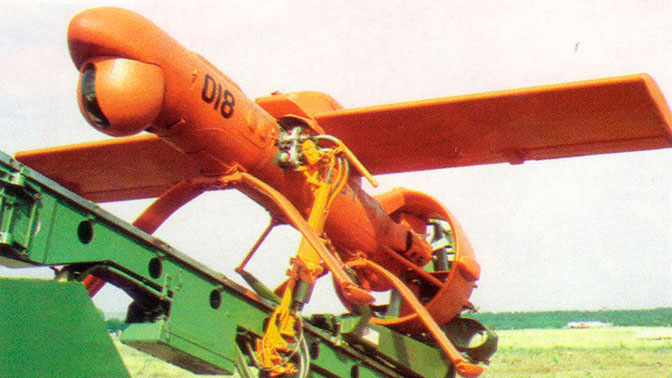 By the way, in the West, not at all the Americans invented composite aviation materials – they are made by Italian concern Leonardo (formerly Finmeccanica) for Boeing and other aircraft manufacturers. The plant is located in Naples. But even in this area, due to the absence of expensive aluminum in the country and the need to find a replacement for it, IAI was forced to go one step ahead of its direct competitors.

Thus, since 2010, Russia unexpectedly made a powerful breakthrough and managed to organize an independent production of composite materials for UAVs. In addition, our country has worked for the needs of defense fundamentally new solutions in the field of IT technologies. In some respects, this is a miracle, from the point of view of professionals, explained by the cooperation of the Sukhoi Corporation with Leonardo in the framework of the Sukhoi Superjet 100 project (developed by Sukhoi Civil Aircraft).

It can be said with great certainty that the Italians still shared with the Russians the technologies of the so-called “prepregs” (a special type of aviation sheet materials with uncured polymeric binders). On the other hand, the development of other necessary technologies could be done in the mode of deep cooperation with the same Israel Aerospace Industries. Just recently, Russia brought the Israeli Searcher Mk2 on its territory. It is possible that the engineers reverse-engineered it – studied the algorithms embedded in the device, originally from the Middle East, in order to quickly catch up. Do not forget that Russia itself exports information technology (the third article on income from foreign economic activity after energy and weapons) and, therefore, has the highest potential in the field of programming.

Be that as it may, the appearance at the IDEX-2019 exhibition “Cube-UAV” shocked defense industry professionals, as it vividly proved that Russia was no longer lagging in this area. This eloquently indicates the creation of at least two innovative industrial areas with a developed production cycle.

In fact, it’s known from the author’s personal experience that for the first time the owner of the Kalashnikov concern showed interest in this type of equipment 12 years ago – in 2007. It turns out that during this time period, specialists from Izhevsk worked hard to diversify the product line, which led to a completely logical result.

Creating a Russian swarm of drones automatically removes the danger of others using the same kind of technology against our interests. Previously, Western opponents always had the opportunity to answer that they didn’t shoot at sparrows with guns. Therefore, not a single Avangard or Dagger will be able to protect our Homeland from the attack of the many-thousand swarms of the Iron Locust — cheap in production, and used, possibly, without a national flag. 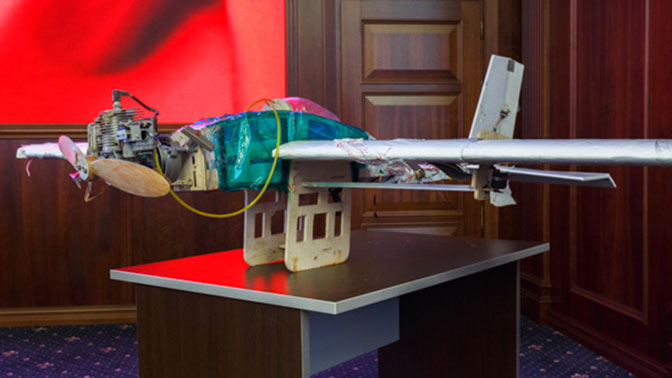 In fact, to establish the belonging of a flying droid to a particular state is not an easy task: marking may not be applied, and there is no pilot on board. Therefore, it is very difficult to blame any country for aggression. Suffice it to say there was attack of drones on the Russian airfield in Syrian Hmeimim, possibly by Israel. Then it turned out impossible to prove the involvement of any of the powers, despite the obvious: ISIS clearly could not assemble such devices on its own in an ancillary workshop.

Besides the fact that Russia now has a weighty enough argument – its own drones – it also developed a whole “product line” aimed at neutralizing the UAV. These are Krasukha, Pishchal, and Diabazol with a P-330R Resident, and, finally, the Peresvet laser. Some of these systems first find the flying robot, and then suppress the onboard radio-electronic complex. Others burn holes in it with a laser. These systems are already on duty in the territory of Russia itself, and in Syria.

VIDEO: What is the Strategy of Eurasianism? A Critical Examination in Brief