MINSK – Lukashenko has just announced his willingness to move Belarus even closer to the Russian federation, by introducing a common currency.

President of Belarus Alexander Lukashenko said he supports the introduction of a single currency in the Union State. But it should not be a Russian or Belarusian ruble. 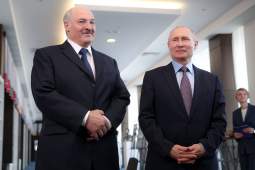 Rapprochement to the maximum: the Russian Federation and Belarus are ready for further integration
Vladimir Putin and Alexander Lukashenko discuss prospects for relations between the two states

According to the head of the Republic of Belarus, he discussed the introduction of a single currency in the Union State with Russian President Vladimir Putin. On the proposal of the Russian leader that this would be the ruble, Lukashenko agreed, noting that “this is not in question, ” RIA Novosti reports on Friday, March 1 . “It will not be a Russian, not a Belarusian ruble, it will be our common ruble,” suggested the President of Belarus.

Also, the key issue in discussing the introduction of a common currency of the Union State, Lukashenko, called the “issue of the emission center” (where the currency is issued from). He explained that Russian President Vladimir Putin proposed the creation of an emission center in Minsk, while Lukashenko called for his placement in Smolensk.

However, on Friday the Belarusian leader clarified that the emission center could be located in St. Petersburg. “Let it be in St. Petersburg, the birthplace of the president of Russia, my favorite city – Leningrad, St. Petersburg now. Let it be there, ”the leader concluded, notes Interfax .

On February 15th, Lukashenko said that Belarus and Russia are ready to go so far along the path of unification, but the issue of sovereignty is not discussed in this context. On February 22, the politician noted that in the event of the appearance of new American missiles in Europe, his country is ready to work with Russia on countermeasures.

The Union State, also referred to as the Union State of Russia and Belarus, is a supranational union consisting of the Russian Federation and the Republic of Belarus. It has existed since 1996 and represented, at the time, the first move towards re-establishing the sphere that once encompassed the USSR.

Since then, as Belarus is a member of the Eurasian Economic Union, has been put forward in Russia’s diplomatic and geostrategic strategy, as some sort of ‘neutral’ state akin to Switzerland. Russia wanted to promote Belarus as being ‘independent’ from Russia, and normally employed some scripted rhetoric from time to time, to ‘throw the scent’, wherein Lukashenko would make seemingly sudden and ‘out of the blue’ pronouncements as to the sovereignty of Belarus, or displaying some degree of disappointment with this or that initiative of Russian government in Moscow.

There is a presently a Pro-Polish Belarusian radical opposition movement today in Belarus, which uses the symbolism and slogans of the Polish-Lithuanian Commonwealth, which also once dominated the lands which today are Belarus. This movement is backed chiefly by the United States as part of its ‘New Europe’ program, that lines up with U.S policy on Ukraine, and towards the ostensible creation of a ‘Middle-Europa’ Union – neither Eurasian Union nor European Union. In reality it would function as a geographic and military buffer to work as a hedge against the potential and eventual merger of the Eurasian Union with the European Union along lines acceptable to Moscow, that is – with Russia remaining a single unitary state.