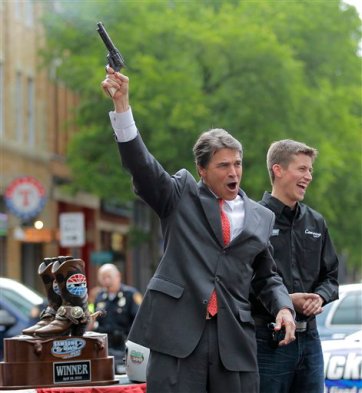 Rick Perry runs the United States Department of Cocaine, er, excuse me, Department of Energy. But you get lots of energy from cocaine, right? Having Perry, who’s Texas administration quashed a major break by investigators digging into drug cartel corruption in the USA, in charge of ‘energy’ makes perfect, ‘dark irony’ sense in a country that is corrupt across the board. Here follows is the verbatim investigative report from the El Paso Times, taken down from the paper’s website but preserved elsewhere. It is a rare insight to the depth & breadth of the crime overtaken the USA’s institutions at the top and highly relevant in the present day:

Two former law enforcement officers allege that they cannot get anyone to investigate allegations that the Mexican drug cartels have corrupted U.S. law officers and politicians in the El Paso border region.

Greg Gonzales, a retired Doña Ana County sheriff’s deputy, and Wesley Dutton, a rancher and former New Mexico state livestock investigator, said that instead of arrests and prosecutions of suspects, their whistle-blowing activities have resulted only in threats and retaliation against themselves.

“I lost my job for a security company at the federal courthouse in Las Cruces because I would not keep my mouth shut, and someone threatened me by holding a knife to my throat,” Gonzales said.

Dutton, a rancher in Southern New Mexico, said an election official stopped by his ranch to ask him what was it going to take for him to retract his allegations concerning the official.

Both men were confidential sources for the FBI in El Paso and assisted with investigations over an 18-month period.

Gonzales and Dutton allege that the FBI dropped them after “big names” on the U.S. side of the border began to surface in the drug investigations.

FBI Special Agent Michael Martinez said that the FBI cannot comment on its former or current relationships with confidential sources.

Dutton said an FBI official who used to be in El Paso sent a memo to other law enforcement agencies in the area to dissuade them from talking to him and Gonzales or having anything to do with them.

Gonzales and Dutton said both or either one of them helped with federal investigations that were successful, including the arrest of Special FBI Agent John Shipley. Shipley was convicted of weapons-related charges after a weapon he sold someone turned up in Chihuahua state at a scene where a firefight took place between Mexican soldiers and drug traffickers.

However, they said, they are concerned that other serious allegations have not found their way to court.

“One of the street gangs that works for the Juárez cartel put a hit out on FBI Special Agent Samantha Mikeska, and I told the FBI as soon as I heard about it,” Dutton said. “We also had information on campaign fundraisers and parties in La Union that the cartel held for officials from New Mexico and El Paso. A lot of important people were at those parties, such as bankers, judges, and law enforcement officers.”

Mikeska is a high-profile agent whose investigations of the Barrio Azteca gang led to prosecutions of gang leaders. The gang, which has members in West Texas and New Mexico, is linked to the Carrillo Fuentes drug cartel.

Gonzales said a U.S. law enforcement officer was suspected of selling to a street gang with Juárez drug cartel ties a list of U.S. Marshals that included their telephone numbers.

“With their number, the gang was able to ‘clone’ the agents’ cell phones and intercept their calls,” Gonzales said. “That way, they would know when one of the agents was trying to serve an arrest warrant against one of their members.”

Dutton and Gonzales said small aircraft regularly drop drug loads on ranches or other properties along the U.S.-Mexico border, and that some U.S. law officers escort the loads to the next stop.

The two whistle-blowers said that drug cartels have managed to obtain computer access codes to U.S. surveillance systems that let them see where and when Border Patrol agents are monitoring the border.

They also alleged that drug cartels have given big donations to politicians, which are unreported, to influence appointments of key law enforcement officers.

Some of these allegations were contained in a letter that Dutton provided to Gov. Rick Perry, who is seeking the Republican Party’s nomination for president in the 2012 election.

“Our office received the letter and referred it to the appropriate agency, which was the Department of Public Safety,” Josh Havens, a spokesman for the Texas governor’s office, said last Friday.

Steven McCraw, director of the Texas Department of Public Safety and a former FBI agent from El Paso, said last Friday that he was interested in talking to Dutton. Then, about a half-hour later, McCraw said that Dutton had no credibility.

“We looked into it and there was nothing there,” McCraw said.

Dutton said in response, “How can they say there was nothing when they didn’t even look at what I have?”

Dutton said he has videos, telephone records, and other documents gathered over the 18 months he worked with the FBI.

“The DPS never asked to see any of it,” Dutton said.

During his work with the FBI, Dutton said the FBI asked him to accept drug shipments from Mexico through his ranching company.

“The drugs were concealed in horse saddles, and we started getting a lot of them,” Dutton said. “But the FBI kept putting me off when I asked for the money to pay the cartels for the drugs. I had to use my own funds. The FBI still owes me thousands of dollars for these out-of-pocket expenses.

“I asked the FBI for help when I started getting threats, but the only thing that happened is that everyone starting running for cover to protect their careers,” Dutton said. “One of the FBI agents said politics got in the way, and that they had to close out the investigation and end their relationship with me.”

As a state livestock investigator, Dutton made arrests like any other law enforcement officer, collaborated with sheriffs’ offices, seized drugs and investigated thefts. He also developed intelligence that drug cartels used cross-border cattle shipments to transport drugs across the border at Santa Teresa.

Dutton said other informants told him that the Zetas drug cartel has a high-level member in Las Cruces whose wife holds a non-law enforcement job in the DEA’s office.

The whistle-blowers also alleged that the corruption they’ve encountered includes a prominent doctor in El Paso who provides prescriptions for drugs to people who need to pass lie-detector tests.

“The FBI was provided with all this information, and I guess that’s why they’re now saying that we’re crazy,” Dutton said.

Dutton and Gonzales said their frustration over the lack of investigations has compelled them to turn to U.S. lawmakers and to Judicial Watch for help.

Judicial Watch is a conservative, nonpartisan educational foundation in Washington, D.C., which promotes transparency, accountability and integrity in government, politics and the law.

The organization publishes a list each year of the “Ten Most Wanted Corrupt Politicians” of both major political parties.

Chris Ferrell, Judicial Watch research director, confirmed that Dutton has been in contact with his office.

Christchurch Attack Decoded: A Manifestation of Israel’s Master Plan to Orchestrate War between the Muslim and Christian World