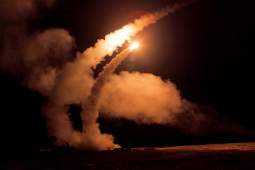 This was announced by Vladimir Lyaporov, the head of the Military Academy of Aerospace Defense (EKR) named after the famous WWII hero, Marshal GK Zhukov.

According to him, the first release of the equipment will take place in 2019, along with the personnel who have been trained to work on the S-500, the Lieutenant-General was quoted as saying by the “Federal News Agency” .

Now the most advanced anti-aircraft missile system is the C-400 “Triumph” air defense system. Deliveries of the complexes are included in the rearmament program of the Russian army.

Russia also signed three major contracts for the supply of S-400 to China, Turkey and India. Deliveries to Turkish partners are scheduled for 2019. The S-500 Prometheus system will replace the S-400 in Russia, and is superior to the S-400.

The American Zio-Triumphalist rag, The National Interest, earlier reported on the uniqueness of the S-500. According to the experts of the publication, the range of S-500 missiles is 600 km, which is approximately 200 km greater than the capabilities of the S-400.

In addition, the new system is able to simultaneously track and intercept up to 10 warheads, which move at a speed of about 6.5 km / s. The authors of the material especially emphasize that they question if the limited development of the S-500 may be due to technological difficulties.

Contrary to this, Vladimir Lyaporov clarifies that the S-500 will not only have a range in excess of the present S-400 by over 200km, but will have a higher ceiling – among its capabilities will be the simultaneous downing of satellite systems.

Contrary to popular misconceptions, satellites do not orbit in space, but are well within near-earth orbit and within the ‘sphere’ that encompasses the earth.