Idlib, Hama, SANA- Army units conducted intensive bombardments against positions of Jabhat al-Nusra terrorists in the Idlib southern countryside and Hama northern countryside inflicting heavy losses upon them in the personnel and equipment in retaliation to their frequent breaches of the de-escalation zone agreement. 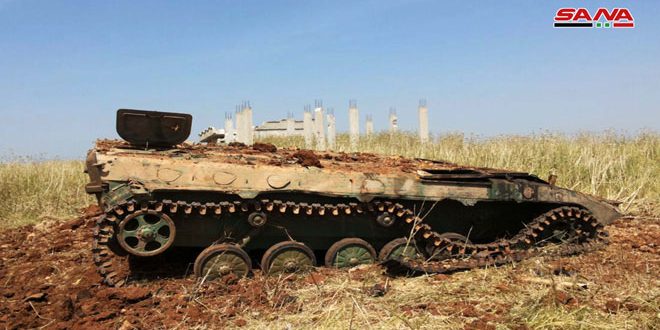 SANA’s reporter in Hama said that army units conducted bombardments against fortifications of terrorist groups affiliated to Jabhat al-Nusra terrorist organization in the town of Kafr Zita, about 38 km northwest of Hama and in Arinba town in Idlib southern countryside.

The reporter indicated that army units tracked the movement of terrorist groups accompanied by vehicles moving on the agricultural roads in the surroundings of Kafr Sajna in Idlib southern countryside and targeted them with bombardments amid a state of confusion among terrorists’ ranks as most of them fled away.

The reporter added that heavy losses were inflicted upon the Takfiri organization in the personnel and equipment in the areas from where terrorists infiltrated and in their fortified positions.

On Sunday, army units killed a number of Jabhat al-Nusra terrorists and injured others and destroyed a number of their vehicles in operations against their positions in al-Latamina, al-Zakat, Hasraya, al-Sayyad and Kafr Zita in Hama northern countryside and in Hish, Abdin, al-Sheikh Mustafa and al-Fatira in Idlib southern countryside.

Russian TV on the Gulf of Oman incident: a Classic provocation

MAJOR: Syria to Build a Replica of Hagia Sophia With Russia’s Help