What kind of leader is Xi Jinping? China’s Futurism and Meritocracy in brief

What kind of leader is Xi Jinping?

He’s somebody who will deal with shit. I mean it literally.

In 1974, Xi volunteered to go to Liangjiahe, a dirt-poor village in Northwestern China. His dad was getting the rough treatment during the Cultural Revolution, so he probably felt that getting out of Beijing was a safer move. So he volunteered. 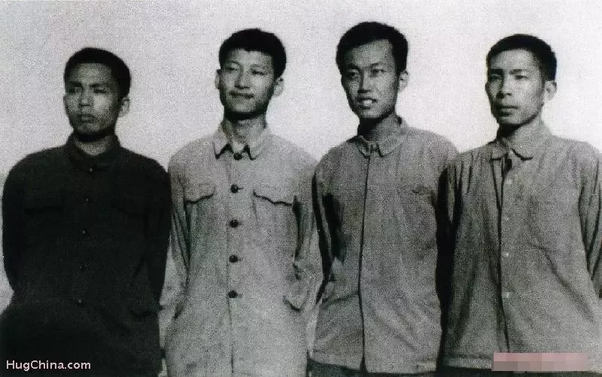 There he was, second from the left.

China’s GDP per capita in the 70’s was around $100 per year, which is obviously not great. But Liangjiahe was a totally different ball game. It was a famously poor place. I would guess the GDP per capita was maybe $20 a year. No, I did’t miss any zeros. It was really that poor. There was no electricity, no indoor plumbing, no toilet, no heat, no rice or flour. Corn was a luxury, millet and wild grass were the normal diet. and people just dug dirt caves out of mountains to live. This was the cave Xi lived in at that time: The villagers that Xi lived with – were mostly illiterate and covered in fleas. So Xi looked around, and was like, fleas, oh well, I just have to get used to it. Food? That’s OK, I’ll take a hoe and go farm with the villagers. We can feed ourselves. Electricity? Water? Nah, nothing can be done about that. So what do we have? Poop! OK, so we have poop. We can make something with that, maybe.

So he read about fermenting poop to make methane gas, and tried to build a poop-fermenter in his village, so that people can use it for light and cooking at night. He was only 16 or 17 at that time, so he wasn’t very good and got the pipe stuck, so he had to jump into the cesspool to clear the pipe, and got poop all over himself, but he got it working. The next year he traded his motorbike for water pump and some other tools for the village, and pretty soon his village was getting more prosperous. He stayed and worked in that village for 7 years, applied to join the CCP 10 times, got rejected 9 times, and finally got admitted on the 10th time. The villagers promptly elected him the Party Secretary of the village. That was how he started his political career in China.

He’s not unique. Actually, all of China’s leaders have been through absolute hell to get to where they are. CCP tradition is that unless you start from the very bottom, you’ll never get to the very top. I mean, you are selecting 7 out of 80 million, once every 10 years, so the CCP traditionally has been absolutely ruthless in terms of discipline and promotion. Election bribery? Expel 70. Industrial accident? Send 25 to jail. Corruption? Punish 100,000 in one year. Get GDP to grow at 10%+, while keep your nose clean? OK, you get a one step promotion. A small purge once every 2 years. A big purge once every 5 years. You’ve got to beat out 80 million people to get there, and everybody is swimming as hard as you are. The ones who pop out at the end, after 35 years, are all NOT your normal people!

When Beijing announced the plan to eliminate extreme poverty in 2015, most foreign observers were dubious. Can China Wipe Out Poverty By 2020? Since the announcement, People Daily, the top Chinese newspaper, has been literally reporting on poverty reduction DAILY – success, failure, method, strategy, recidivism, lessons learned, statistics, etc. Everyday! I suspect the guy is actually serious about it.

MAJOR: Advisor responsible for the coup attempt in Venezuela is a CIA agent

MAJOR: Russia is willing to supply S-400 systems to Iran