The private Israeli satellite intelligence firm, ImagSat revealed the day before the July 1st strike which killed 15 civilians, that the Russian provided S-300’s had gone operational in Syria. Israel had promised strikes on strategic positions in the event that Syria operationalized the S-300’s provided by Russia.

It appears that among the subjects of the Israel-Russia-US talks was an urging by the Russian side that it not allow the S-300’s to go operational. As a consequence of a failure of any agreement, Israel launched strikes as they threatened they would.

Regarding the claims made by ImagSat, while an Israeli company and therefore suspect in its claims, FRN previously found them to be correct regarding the movement of S-300’s in Venezuela, which warded off any potential US attack.

There have been a series of attempts in some alternative media, pushing an inflated version of the ‘Russia-Israel cooperation’ model on Syria and Iran, that the attacks were evidence of the contrary – that Israel and Russia had come to some deal on the reduction of Iranian influence in the region.

PLEASE TAKE A MOMENT TO CONSIDER SUPPORTING MY WORK

This is patently incoherent for a number of reasons, and amount therefore to baseless claims and wild speculation.

These are also quite readily dismissable, and would only resonate among those with a developed confirmation bias in that direction. They happen to border on a type anti-Semitic conspirology which actually works towards Israel’s interests, and inflates Israel’s foreign policy power in the world: projecting the particular influence of AIPAC on the US, as well as Zionist influence on several EU states, to being applicable to nearly every sovereign government on earth. These are often coupled with photos of Putin meeting Netanyahu, the half-witted implication being that world leaders only meet because they are operating in lockstep on most all geopolitical arrangements.

It appeals primarily to corners of the internet promoting an ultimately damaging (to the image of Russia’s foreign policy) trope that Russia acts consistently in Israel’s interests in the region to the detriment of Russia’s military allies in the Syrian conflict. Given the history and pattern of Israeli disinformation campaigns, which make truth-opposite claims to divide its situational opponents, such claims are also ultimately pro-Zionist or Zionist-supportive in nature.

Among Israel’s patently false claims, for example, were that Israel prefers Assad’s government over that of the FSA-led attempts at a provisional or transitional government. The exposed Israeli campaign of medical, logistic, and supply-line support for the FSA (and related) was significant in revealing the false nature of that claim.

Moreover, such attacks by Israel on Syria repeatedly draw the ire of Syria’s international supporters against Russia’s position. This is due to a misunderstanding of the fact that Russia is on an anti-terrorism campaign in Syria, always behaving economically and nearly impossible to provoke a response out of; and specifically not at war with Turkey or Israel (or Jordan, or Saudi Arabia, etc.).

There is a long pattern of Israeli attacks on Syria, even during the Russian campaign. After Israel (or France, working on Israeli urging/information) downed the Russian IL-20 observation plane in mid September 2018, Russia announced it would be moving forward with the transfer of S-300’s to Syria’s operational command.

Initially, there was to be some three months delay in these systems going operational, after an additional delay of these being delivered by some three weeks. All together, Russia indeed used these as leverage against Israel, and Israel reduced its military campaign on Syria consequently – but the effect was that Russia did not hand the keys to the systems to the Syrian anti-air forces until just recently – the day before the Israeli attack. This reveals a break-down in Russia-Israel talks, not a success for the Israeli position.  The mathematics of this is fairly self-evident.

Israel had been pushing on Russia to move Iran to reduce its presence in Syria. But in standard method, Israel pushed on too many partners and with too much vigour, and found too much success.  Too much for its own good. Israel arrived, therefore, at a series of unmovable positions for everyone else.

But as a consequence of of the collapse of the JCPOA, which Israel thought it wanted, Iran does not and cannot now buckle. So instead it returns to higher levels of enrichment, and moreover, its position in Syria and Lebanon therefore becomes more critical not less critical. As a further consequence, Russia is not in any reasonable position to successfully push on Iran to reduce its presence.

Israel once again becomes the victim of its own success. Successes in the US and EU led to an unworkable pressure on Russia. Iran has been pushed into a position without any room for compromise. While perhaps Israel knows that they are pushing Iran into an uncompromisable position, the idea here was probably to make Iran and Syria appear as unreasonably stubborn. Thankfully, Russia does not lack clarity on the real positions, nor on strategic thinking – especially regarding its ‘frienemy’, Israel.

Israel went into negotiations knowing it would exploit Russia’s neutrality towards the actual states backing terrorism in the region, and threatened that it would attack Syria if its S-300’s went operational, or that it would attack Iranian positions if Russia did not succeed in pushing on Tehran to recall them – as it has before, openly, and in a documented fashion.

Russia already has affirmed its position not to attack Israel, or Turkey, or Saudi Arabia even as they have backed terrorists in Syria. Russia only attacks terrorist formations in this conflict.

Yes, there is a connection between the last meeting between Israel and Russia, and Israel’s attack on Syria. It is that Israel did not get its way, and had to resort to carrying out its threats. Such attacks on Syria undermine Syrian civilians confidence in the Syrian government, and leads to doubts both in the arena of international support for Syria, and even within Syria, that Russia is a reliable partner for peace and stability in Syria.

Claims that, moreover, Russia somehow gave Israel its ‘blessing’ in that meeting (when in fact the meeting resulted in an impasse and Israeli frustration), also lend towards undermining the actual positions of the real players in this conflict, as they are play out.

This article from ‘The Times of Israel‘ also claims that the Israel satellite intel firm found that Syria had operationalized the S-300s just a day prior to the attack by Israel: 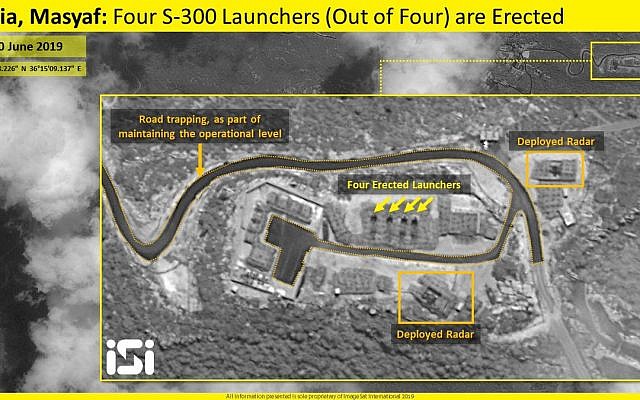 Until now, only three of the country’s four surface-to-air missile launchers had been seen fully erected at the Masyaf base in northwestern Syria.

But satellite photographs released on Sunday showed the fourth in position as well, some nine months after Russia gave the air defense system to Syria, according to Israel’s ImageSat International.

On February 19, the firm said the system generally appeared to be operational, based on multiple satellite images of the battery, other than the fourth launcher.

“The images of the three erected launchers at various times in Syria indicate that they are probably operational,” the firm wrote on its website at the time.

ImageSat said at the time that the fourth launcher, which has now been seen erected, was “possibly an invalid, dummy or a different element that serves as deception.” 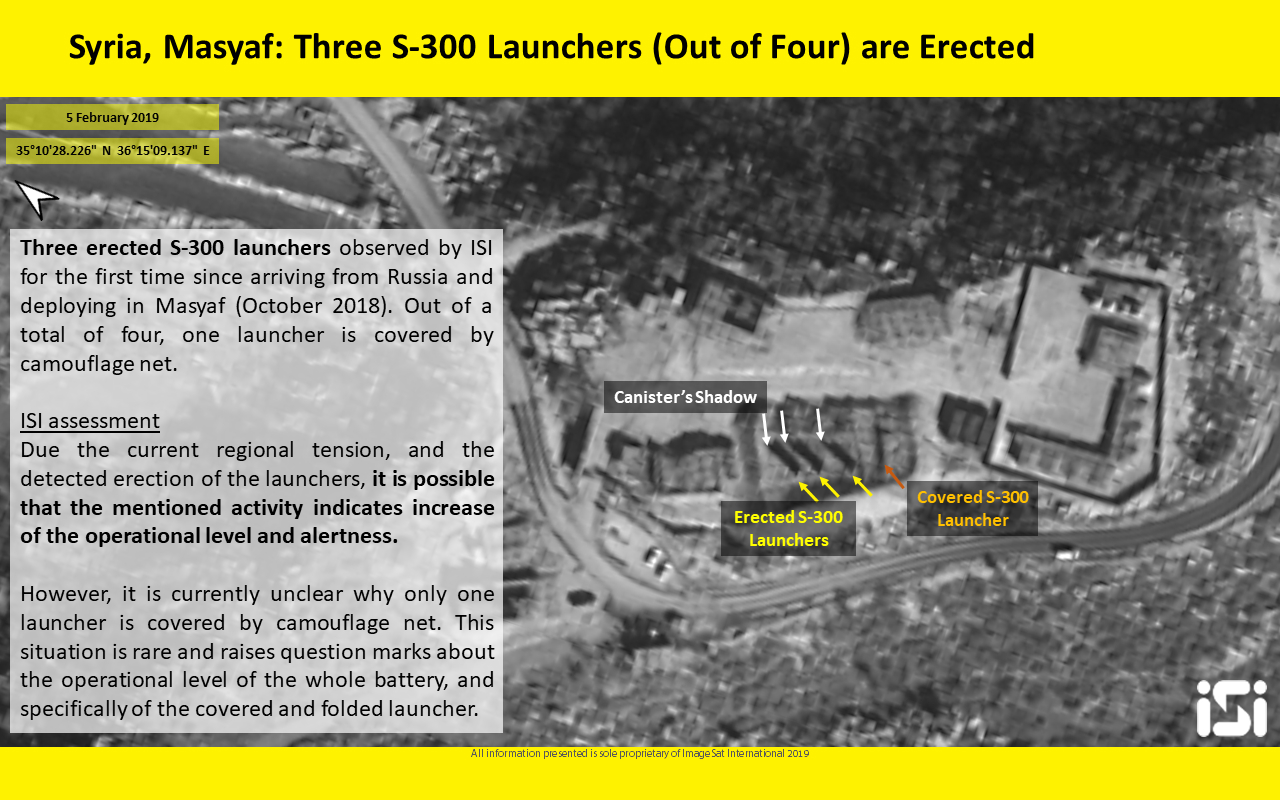 Israel has threatened to destroy the S-300 system if it is used against its fighter jets, regardless of the potential blowback from Russia.

Moscow announced it was providing the Syrian military with the advanced system following the downing of a Russian spy plane by Syrian air defenses during an Israeli airstrike in September. Russia publicly blamed Israel for the loss of the reconnaissance aircraft and its 15 crew members, saying the Israeli pilots used the spy plane as cover during the strike.

The charge was rejected by Jerusalem, which blamed the downing of the Russian aircraft on Syrian troops firing their air defenses wildly and continuing to do so after the Israeli fighter jets left the area.

Russia has said the S-300 platform it was giving Syria following September’s incident would “cool off hot heads” in the region.

Since the system was delivered in October, Russia has been training Syrian forces to operate the powerful air defense platform. 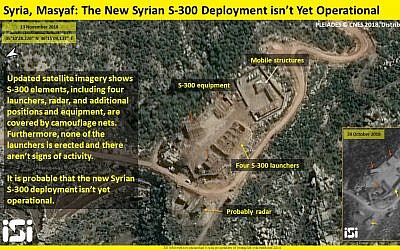 For years, Israel has been waging a campaign against Damascus’s ally Iran, which Jerusalem accuses of attempting to establish a permanent military presence in Syria to threaten the Jewish state.

Syria’s acquisition and eventual operation of the S-300 system marked a substantial improvement in its air defense capabilities. However, Israel has long been rumored to be capable of maneuvering around the system or destroying it, though that would risk a major diplomatic rift with Russia, the most influential superpower in the region.

Israel says it has carried out hundreds of airstrikes on Iranian-linked targets, as part of its campaign to prevent Tehran from establishing a military presence in Syria.

The Syrian military last year said it believed the S-300 air defense systems would largely stop Israel from successfully conducting strikes against targets in the country.