No Limits to Propaganda – Call of Duty: Modern Warfare

No mass media is immune to propaganda, video games included. For decades, Russians, Chinese, Latinos, Arabs, and many others have been portrayed as villains in many video games. The now-iconic Call of Duty series is no exception. However, with the most recent installment in the series closing to release date (October 2019), and having released the trailer, Call of Duty: Modern Warfare has taken propaganda to the next level.

For those who don’t know the history of the game, it is important noting that the first 3 modern warfare games were almost entirely based on fiction and following a different, alternate timeline, with events taking place in very near future. The story played on many stereotypes, typically featuring Russian and Arab villains threatening “world peace” and being stopped by a handful of US and UK special forces. And each game was a continuation of the previous installment.

However, the latest game in the series makes a sharp turn. It keeps some of the old characters, but it takes place in our timeline and features characters who have died in the alternate timeline. All of this seems strange, given the fact that the fanbase, especially a massive one, dislikes sudden changes which break the storyline of the game. However, the lore developers really went out of their way to significantly change the storyline and make it more in line with the current foreign policy of most of the Western countries. 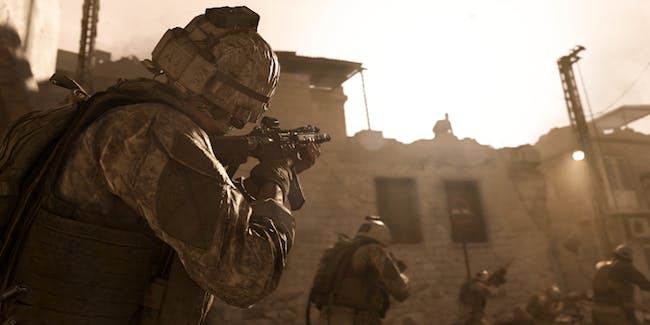 This installment features the Syrian War from a perspective seen only in the Western mass media. The player works with the so-called “moderate rebels”, and  “saves civilians from indiscriminate Syrian and Russian bombing, shelling or chemical weapons attacks.” It goes without saying that, despite numerous reports of alleged Syrian and Russian war crimes, a single shred of credible evidence has not been presented to prove these baseless claims.

True to their reputation, the developers did their best to make the game look stunning, both in terms of in-game mechanics and visually.

According to some estimates, no less than 25 million copies will be sold within only 3 months from the moment of the release. Call of Duty series has been around for 16 years, with mind-blowing 300 million copies sold worldwide. That’s a massive player fanbase and thus, a big propaganda target.