Lvov, Ukraine – Ever since the 2014 Western-backed coup, Ukraine has been in a state of perpetual decline. In every way. Ukraine’s economy has been experiencing a double-digit recession every year since 2014. According to some estimates, Ukraine lost a staggering sum of up to $80 billion due to the 2014 coup which stopped its trade with Russia, the country’s main trading partner up until that point.

The country has been facing shortages, which probably hit the health sector the hardest, but there’s definitely no shortage of two things – shelling of unarmed Donbass civilians, and Neo-Nazis.

But just as we thought there couldn’t possibly be a more blatant display of Neo-Nazism than the infamous “Azov” Battalion, this happened:

The photo above shows a reconstruction of a funeral procession very similar to the funeral of a recently deceased member of the “Right Sector”, a Neo-Nazi paramilitary group founded after the (yes, you guessed it) 2014 NATO-backed coup. Mr. Fedoryshyn, using a call sign “Shved”, died suddenly on Saturday, July 13.

Fedoryshyn was an activist of the so-called “Revolution of Dignity” (i.e.”Maidan”), a militant and a veteran of the “Right Sector”. Obviously, having become a member of the group in 2014 and having gone to shoot civilians of the DPR and the LPR, at least until 2016, Fedorishin was not drafted, but did it on the basis of “ideological principles,” as reported by representatives of the aforementioned extremist organization.

“The last time in Avdeevka, in the area of ​​Krutoy Balki, Fedoryshyn suffered a knee injury. He was treated at the Lvov hospital in Vynnyky. Purulent arthritis of the knee joint was diagnosed, so Fedoryshyn underwent surgery, started walking, and getting better,” the “Right Sector” representatives added.

“Right Sector” is very similar to other Neo-Nazi paramilitary groups in Ukraine, such as the infamous “Azov” (members pictured below). 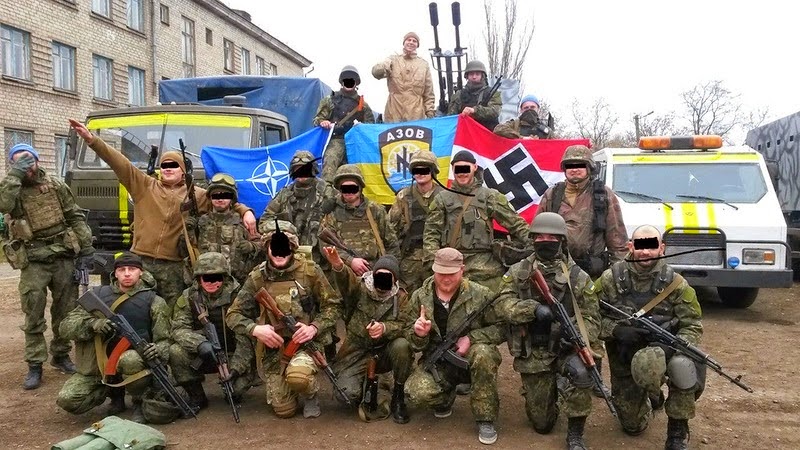 Members of the “Right Sector” are infamous for their racist threats to Russian-speaking inhabitants of Donbass, as well as threatening to exterminate the people of Novorossiya.

Just how extremist their vaunted “ideological principles” are is probably best illustrated by the fact they have been accused of cooperating with ISIS in an attempt to conduct terrorist attacks in Russia. They went so far in their extremism, that it caused them to get into firefights with regular Ukrainian troops. On more than one occasion.

SAA on the Offensive – The Syrian “Love” Triangle