Novosibirsk, Russia – Jul 27, 2019 – After the collapse of the USSR, Russia found itself on the brink of a disaster. The once-proud military superpower capable of taking on the US in terms of highly advanced weapons systems could no longer afford to finance its hi-tech projects, many of which got canceled. During the ’90s, Russia lost a decade’s worth of R&D.

Special thanks to the great guys over at Kompletno Rusko Naoružanje

The strategic parity was never lost however, but a significant gap in key tactical capabilities emerged between Russia and NATO. One of these key capabilities was unmanned technology and by late ’90s, Russia was seriously lagging behind. The West didn’t waste any time and Russia was well-aware of that. Luckily, the new Russian leadership that took power in the early 2000s finally decided to put a stop to this.

Russia started developing its own drones. Despite being a relative newcomer to this field of military tech, Russia was highly successful in developing various types of drones, with a special emphasis on reconnaissance drones. The latest Russian Korsar (literally Pirate) reconnaissance drone is a good example of this.

But the country still lacked a dedicated strike drone platform. And it’s been so for years. Despite this and thanks to the efforts of Russia’s defense sector, which managed to emerge from the dark ’90s, this gap was finally closed too. The latest Russian design is a full-blown quantum leap, a development which has finally and completely erased Russia’s lost decade. Enter Okhotnik-B.

First unveiled in July 2017 and then shown again in November 2018, Russia’s Sukhoi S-70 Okhotnik-B stealth attack drone is slated to make its first public flight in August, Russian media reported. The Okhotnik-B (literally Hunter-B) stealth attack drone will be fully autonomous and will have an advanced AI (artificial intelligence) suite, although, if necessary, there will be a human operator with the ability to control the drone’s actions, Russian news agency TASS reported.

“The Russian defense establishment is promising a test that will include a short-duration ‘jump’—the UCAV (unmanned combat aerial vehicle) will rise briefly above the tarmac to test its launching and landing capabilities,” said Samuel Bendett, an expert on the Russian military.

“The flight will not last for too long — an hour at most, but most likely around 30 minutes,” a source told TASS. “Teams on the ground will intervene if necessary.”

Okhotnik-B’s first flight could signal the beginning of a new era for the Russian air force, which is likely to operate a sizeable fleet of fighter-style stealth attack drones by late-2020s.

A flying wing design, partially similar in shape to the U.S. Air Force’s B-2 stealth bomber, which was inspired by the German Horten Ho 229, which in turn was inspired by an earlier 1920s Soviet design, Hunter-B is projected to penetrate enemy defenses and deliver high-precision ordnance.

For the time being, it’s unclear how many Hunter-B prototypes exist. So far, at least one was photographed on the runway when President Putin visited the 929th Chkalov State Flight-Test Center in Russia’s Astrakhan region, on May 14, 2019. 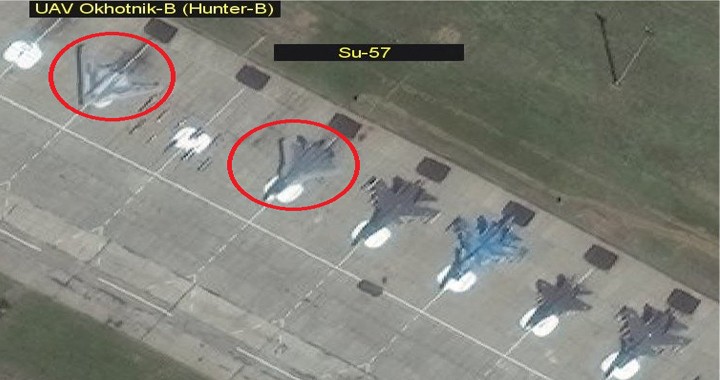 Commercial satellite imagery confirmed the Hunter-B drone’s presence at Chkalov alongside various other warplane types, including the Yak-130 trainer and several versions of the Su-30 multi-role fighter

The Chkalov satellite imagery indicates Hunter-B has a wingspan of around 50 feet, making it roughly the same size as the American X-47B drone or a bit smaller than the Russian Su-57 manned fighter. Size confers volume and hints that Hunter-B possesses a large fuel load and a correspondingly long range. 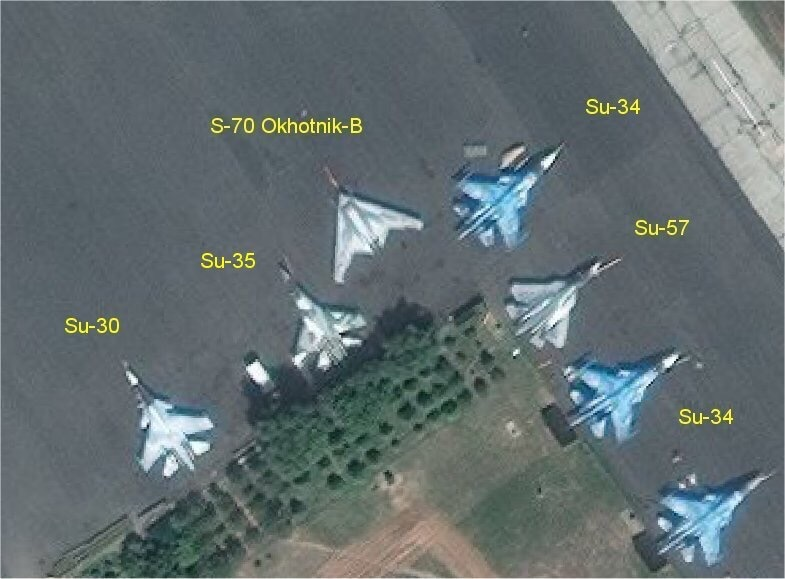 This will be the first appearance of the UCAV since January 2019, when photos depicting the large, flying-wing design were taken, showing the drone on the runway of an airfield in Novosibirsk.

The last picture is probably the most interesting one because it shows that the new drone possesses the single-engine version of the AL-41F1 3D thrust-vectoring turbofan which in its original twin-engine form powers the legendary Su-35 4++/4.5-generation fighters and the first batch of the new deadly Su-57 5th-generation stealth fighters.

However, for the Su-57, this state-of-the-art engine is soon to be replaced by a newer and even better one – the Izdeliye 30. So, it wouldn’t be a stretch to assume the Hunter-B would also get a single-engine variant of the Izdeliye 30. After all, Russia already plans to upgrade the engines for its Su-30 fighters to the AL-41F1.

“Russian crews are already getting ready to fly the drone,” Tom Cooper, an independent expert on Russian military aviation stated. “The first generation of pilots and ground crews for UAVs just completed their four-years-long training, and they meanwhile got significant experience in operating UAVs in Syria.”

“The Russian military is running multiple UAV-related projects,” Cooper added. “Thus the emergence and completion of this project is perfectly normal.”

Although the information on this secretive Russian project is still scant, research by aviation enthusiasts revealed additional information and indicates that the Hunter-B will be much more than just a regular strike platform.

Some analysts go as far as to call the new Sukhoi drone “a sixth-generation aircraft project”. The drone is partially based on the earlier Mikoyan Skat, designed by MiG, and encompasses many technologies of the 5th-generation Sukhoi Su-57 fighter jet.

However, aviation enthusiasts noticed even more new features which might actually give us a hint of the capabilities of the new drone.

Image painted on Su-57’s vertical stabilizer clearly shows the Hunter-B, while enthusiasts believe the antenna found just behind the cockpit (which wasn’t there before) serves as a datalink for the Hunter-B, while the same types of data links are also installed just between Su-57’s engines, as well as on the S-70 Hunter-B itself

Su-57 and the Okhotnik-B will work in conjunction

Recently published information on Russian military procurement plans indicates very high priority being given to maintaining Russia’s ability to conduct air and air defense operations against a technologically sophisticated adversary. This emphasis is a reasonable response to the US plans to rapidly ramp-up F-35 deliveries both to its own military and to its allies.

However, the cost of 5th-generation fighters is such that Russia currently cannot match US and NATO in terms of raw numbers, and probably cannot afford the development of a light 5th-generation fighter that could be produced in larger numbers than the Su-57. But if a heavy-light fighter mix of platforms comparable to the Su-27—MiG-29 or F-15—F-16 or even F-22—F-35 combinations is to be maintained by the Russian Aerospace Forces, the light part of the mix could very well be filled by an unmanned platform.

VIDEO: This is why the Russian Spetsnaz are NOT TO BE MESSED WITH