By Guest Author Last updated Aug 19, 2019
0 2,281
Share
By Grey Carter – Does the Vatican know what the Albanian bishops in Novo Brdo are doing? – the question many Serbs asked these days.

The Albanian Roman Catholic mass was Served in Serbian ancient town and mine, Novo Brdo, in Serbian Orthodox Church of Saint Nikola. All was done secretly and illegally, as is usually done by those who are self-aware of the guilt, Albanian Roman Catholic bishops held a mass at the remains of the ancient Serbian Orthodox Church of St. Nicholas in Novo Brdo, Kosovo and Metohija.

The Mass, served by the Roman Catholic Bishop of so-called Kosovo Dodd Jerji and the Archbishop of Bar, Montenegro Zeph Gashi with the clergy, was also attended by the  (Albanian)director of the Pristina Institute for the Protection of Cultural Monuments, Ismet Hajrulah. The public was informed of the delay, thanks to the newsletter of the Roman Catholic Diocese in Pristina. However, to make things right, Archpriest Stevo Mitric immediately shined his guide in the same place. 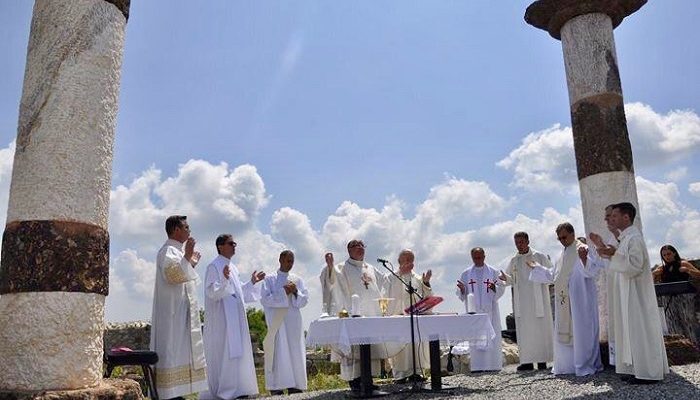 The Diocese of Raska-Prizren made a statement announcing the abuse of the spiritual and cultural heritage of the SPC (Serbian Orthodox Church) on a site founded and built by medieval Serbian rulers, as recorded in domestic and foreign historical literature. However, he did not fail to point out that he was disappointed with the move by the Roman Catholic Diocese of Kosovo, since, as he noted, the “hitherto fair and correct” relations of the two churches in Kosovo and Metohija were disrupted.

Asked if the move by the diocese of Kosovo can be considered authentic, or given the relationship between Belgrade and Pristina and the involvement of a foreign factor in the problem, one can say that politics is behind it, the Serbian historian Milosh Kovich says, as it is today,  –  mapping territory.

“You have heard the speech of the Albanian bishop on the ruins of St. Nicholas Church, the stories that Albanians were present here before Christ, before the Ottomans, etc. That’s a completely unhistorical story, still distinctly nationalistic. The words of the director of the Prishtina Institute show that it is an eminently political mapping, marking of the territory.
Тhe official representatives of the Vatican should react, take a stance about the Albanian occupation of the Serbian Orthodox shrine, so we could find out where does this crime comes from,” says a professor Kovich.
Even though the awful story happened last week, the Vatican turns a blind eye.
However, the Vatican has still not recognized NATO – created Albanian quasi-state.
But in this case, even the papal nuncio in Belgrade remains mute.
Alas, as Latin saying teaches Qui tacet consentire videtur ( Silence implies consent) it is, more or less clear about the position of the top Vatican clergy.
The silent support to the Albanian occupation of Kosovo that the Vatican provides the quasi-state with should not come as a surprise.

Reminder: The Papal inauguration of Pope Francis that was held on 19 March 2013 in St. Peter’s Square in the Vatican. A Muslim/non-Christian/ PM of (still) unrecognized (by the Vatican)  pseudo-state of ‘Kosovo’  Hashim Thaci was standing shoulder to shoulder to long-term Albanian lobbyist Joseph ‘Joe’ Biden at the Papal inauguration. 1
Hashim Tachi visited Vatican in 2016 when he organized mass at the Vatican dedicated to Mother Teresa.

Last year Ramush Haradinai, another Muslim Albanian war criminal, was received on the highest level in the Vatican.
This is how RTK (radio-television of ”Kosovo”) covered the story:

”During his visit to the Vatican, Prime Minister of Kosovo Ramush Haradinaj met Pope Francis to whom he expressed the commitment of the people of Kosovo to preserve and foster spiritual and democratic values for the common good.

“Kosovo is grateful to the Holy See for always finding open doors. The blessing of Pope Francis is further encouragement for the path being pursued by Kosovo and its people, the path of European civilization,” Haradinaj said after the meeting. 3

Even though there are the undoubtedly established historical facts about the Serbian origin of Saint Nicholas church in Novo Brdo, despite the fact that it has been known since ever that St. Nicholas church in Novo Brdo is an Orthodox Metropolitan Church, the seat of the metropolitan and that this was evidenced by both Muslim and Catholic sources from that time, that didn’t mean anything to these 21st centuries joint Catholic – Muslim crusade.
The violent act of Vatican and Albanians is just one more attempt to convert the Orthodox Church to Catholic and, as time passes by, to an Albanian shrine, since there are Catholic Albanians in the area but Serbs are mostly Orthodox.

This is a part of annulling, deleting traces of the existence of Serbian nation, and it started when the Albanians ( supported by NATO and later Google) violently started to change millennium-old toponyms and turn them into Albanian.
At the same time in Albania, not a single stone was left to testify about the presence of Serbs or other nations.
It was destroyed in the time of Enver Hoxha or renamed into the Albanian heritage.

That’s a continuation of the century-old Albanian policy of destruction of Serbian cultural, historical and religious traces.
For example, by 1966. Law, the state of Albania forbade all personal Slavic names and all Slavic toponyms.

Ten years later, in 1975, even a more rigid decree was brought. It sealed the fate of Serbs in Albania mostly living in and around the city of Skadar. According to the decree,  our people (our people in Albania at that time, apart from Serbs, were also Montenegrins and Macedonians) had to give up their “non-Albanian names” because they sound “inappropriate” or “degrading from a political, moral or ideological standpoint.”

At the same time, Article 42 of the Constitution of Albania predicted that
”ethnic minorities in Albania were guaranteed the protection and development of their culture, their national traditions, the use of their mother tongue and the teaching of their mother tongue in schools, equality of development in all fields. social life…. ”
What a shameless mimicry!
It does not take much mind to grasp the grave contradiction between the proclaimed (for marketing purposes, it would be said today) paradise and the true fate of national minorities in that country.
At the same time, hundreds of thousands of Albanians came to Serbia as migrants and continued their settlement in Serbia without interruption.
This is a striking and terrifying fact: only from the end of the Second World War until 1960, “more than 100,000 ha of Serbian land” was usurped by Albanian immigrants in Kosovo and Metohija (it was, therefore, the public property of Serbian citizens).

In his letters to the archbishop of Skopje, Andria Bogdani (who was his relative) the Bishop states –
quote:
”The core of Catholics in Serbia consists of the Albanians. That’s why the Catholic faith is called “la fede  Albanese.
It happens that those of Albanians who, in their daily life, deal with Turks and Serbs, sometimes abolish their Catholicism, but after we explain them properly that it’s a sin, they easily return to the true faith.”
-end quote

The small insight into the relations between Albanians and the Vatican reveals that they have always been running under the surface and that they’re both intense and close.
The Vatican didn’t recognize so-called Kosovo, but the Vatican named a ”Kosovo bishop – Albanian Dodë Gjergji, different from the bishop of Serbia (Stanislav Hocevar) there is Catholic Church of Kosovo, Pope receives Albanian leaders of stolen Serbian land as legitimate officials(presidents, prime ministers) of something called ”Kosovo”…
The same as NATO, Vatican uses Albanians to spread its power over never conquered Serbian territories and, as it was the case with the US and NATO, that’s a mutual benefit for both parties – the Vatican reaches new territories, Albanians create the so-called Greater Albania.
One day, when the circumstances and balance of power change, they will easily change again, like they did numerous times until today – under Ottomas they were eager Turks (impaling, robbing, raping, murdering Serbs).  Even the Ottoman who burned relics of Saint Sava on the Vracar hill in Belgrade, Sinan Pasha, was an ethnic Albanian from Kacanik, Kosovo.  There’s a mosque built in the honour of the jihadist in his birthplace. https://en.wikipedia.org/wiki/Sinan_Pasha_Mosque_(Ka%C3%A7anik).
Catholics when it’s opportune, Nazi soldiers (notorious SS Skanderbeg), atheists (post-WW II Communist Albania) even Orthodox (since they managed to capture Serbian Orthodox land where Orthodox traces are dominant even though the Albanians’ve been burning down and destroying for almost two decades, couldn’t destroy it all),
Is it al taqiyya brought to perfection?
Loyola and Machiavelli at their best?
That’s what probably even the Albanians don’t know anymore.
But the Vatican knows.

albanian terrorismKosovo and MetohijaVatican
0 2,281
Share
Subscribe to our newsletter
Sign up here to get the latest news, updates and special offers delivered directly to your inbox.

The Anglo American Origins of Color Revolutions and the NED

WHY NOT TURN TO TRUMP? Bolsonaro relies on BRICS Bank for infrastructure projects

ANOTHER MULTI-KULTI SUCCESS: Vienna Attacker Revealed to be an Albanian Terrorist…

UNDER THREAT: Serbia asks Russia to protect Orthodox Church in the Balkans from…

THE RACAK HOAX: NATO’s Fabricated Casus Belli for Aggression Against Serbia and…