9/11 Chickens Are Coming Home To Roost 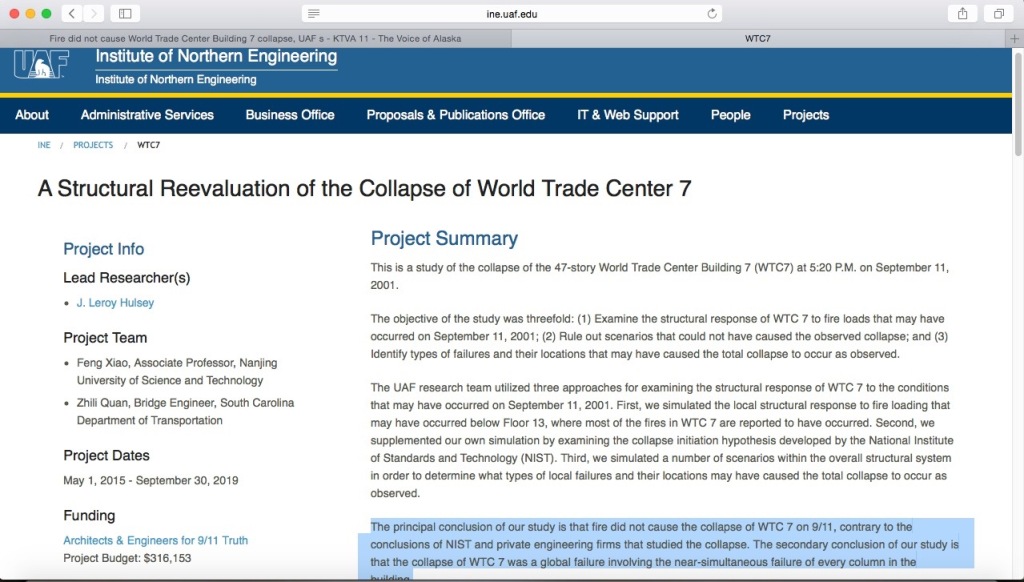 The first university (4 years) study concluding a “global failure” with the characteristic of “near-simultaneous failure” of every structural column in World Trade Center Building 7 points to one conclusion: A controlled demolition. The only earthquake in New York City on 9/11 was the lie of who did it and how it happened. Read about the preliminary conclusions for yourself:

Now, it is only a matter of whose ‘conspiracy.’

Recalling Robert McFarlane, Ronald Reagan’s National Security Adviser, had been working for Israeli intelligence [1], there is practically no position in American government cannot be construed to be at risk of penetration and compromise via MOSSAD & AIPAC. How this might play in the events of 9/11 is open to conjecture; Ariel Sharon, the Israeli prime minister on 9/11, was a man possessed of the necessary character to murder three thousand people in a gambit to get the USA to fight Israel’s wars, this much is clear. Whether MOSSAD had co-opted enough key people in the USA security apparatus to bring it off, is not. At odds with the Israelis’ initiating the attacks is the fact of Dick Cheney ordering the New York area air defense shut down for the morning of 11 September, while a ‘coincidental’ exercise was to be run simulating a ‘terrorist attack’ with jet liners crashing into New York sky-scrapers.

Could Cheney’s team all have been Israeli assets? It seems unlikely. On the other hand, it is classic Israeli style to use their enemies, wherever possible, to take care of their most dirty work. And America is LIKUD’s enemy in a cold political calculation. Related to this, however MOSSAD and Saudi intelligence might cooperate in common geopolitical interests, most certainly Israel and Saudi Arabia are not friends. Utilizing al-Qaida as a front to initiate the attacks, or utilizing Saudis as patsies for a false-flag ‘terrorist’ attack, either one, is consistent with Israeli style; in the past MOSSAD has laundered operations through the PLO for purpose of everything from terrorism for propaganda purposes, to political murders. A second or alternative possibility is the Israelis duping the USA’s people into assisting with their operation.

The Israelis may have/had the necessary access and certainly the motivation; whereas the Americans have repeatedly demonstrated they are guilty of that particular brand of hubris that is blinding. Another possible scenario is the USA’s geopolitical intelligence engineers having penetrated an Israeli operation and opened doors for the 9/11 actors, basically rolling out the red carpet for an Israeli run operation, unbeknownst to the Israelis, a covert co-option if you will. A fourth possibility is an Israeli-American joint venture (I lean towards this.) A fifth possibility is the Bush criminal syndicate responsible for 9/11, taking care to frame the Israelis in case the operation were to unravel. In any of these hypothesis, Rudy Guiliani (Trumps personal lawyer) having located his disaster headquarters in WTC Building 7, is key.

What’s almost certain is, Al-Qaida was a minor actor, a dupe and cover story, and was not primarily responsible for 9/11. Insofar as responsibility & accountability, there is none. These agencies or actors, with the likely exception of al-Qaida, would have access to tactical nuclear weapons or ‘suitcase nukes’ for purpose of false-flag terrorism, were it to come to the likes of a Bibi Netanyahu, or Bush family & Robert Gates’ associated Iran-Contra minions determination to up the ante as opposed to face accountability (noting Iran-Contra personalities have their fingerprints all over the USA security apparatus during the Bush Jr administration, 9/11 and coverup, recalling Iran-Contra was a joint MOSSAD-CIA operation.)

Advertisements
9/11911False FlaghoaxSeptember 11thworld trade center
0 5,548
Share
Subscribe to our newsletter
Sign up here to get the latest news, updates and special offers delivered directly to your inbox.

Russia and Ukraine: Peace, To Be, or Not To Be, That is the Question (VIDEO)

PHOTO – What does a Buk have to do with this? New details of the Boeing MH17…

Meet the X-32 Supersonic Missile that Awaits Joe Biden in…

Prev Next 1 of 5,239
Popular Topics
Advertisements

How Alt-Right Media Attempts a Cover-up of the George…