Why Patriotic Nationalism Beats the Ethnic-based One

Special thanks to experts Slobodan Antonic and Zoltán Csala

When talking about nationalism, the Western mainstream media often use the term in a broadly negative connotation. However, how many people in the neoliberal-dominated West really know anything about nationalism? Expectedly, the answer is little to none. In order to understand nationalism, we have to go back to its root.

Although nationalism was defined only in the late 18th/early 19th century, societal systems very similar to nationalism have existed for as long as the human civilization itself. Of course, as no ideology is perfect, nationalism isn’t either. The most radical form of nationalism, Nazism, killed tens of millions of people and brought untold suffering to hundreds of millions. Still, we might say the same about any radical iteration of any ideology. That’s why nationalism should be studied from a rather different, unbiased perspective.

The “evil Russians”. If it’s up to the Western MSM, the word “Russian” itself is negative. Coupled with the word “nationalism”, it probably causes mass nervous breakdown for most neoliberals. “Russian aggression, Russian invasion, Russian meddling”, etc. All of this makes Russian nationalism look quite bad by default. However, the reality is much different.

In Russia itself, ethnic Russians are 80% of the population. The rest of the population are Russia’s countless minorities. But unlike most minorities in the West (most of whom are minorities thanks to Western colonialism), Russian minorities aren’t oppressed and are quite integrated into the Russian society, while still retaining their distinct ethnic identity. And many of them are full-blown Russian nationalists (with Buryats leading the charge, ahead of even ethnic Russians themselves).

In the Russian Empire and the USSR, Russians were just over 50% of the population. Yet, the Russian Empire survived and thrived for centuries. The Russian Empire, although just as flawed as any other country, wasn’t really a Western-style colonial power. If that was the case, little to none of the indigenous peoples of Siberia and Central Asia would’ve survived centuries of Russian rule. How was all this possible?

First, let’s examine how Russians actually see themselves. Ethnic Russians are one of 194 ethnic groups who live in Russia. Despite 80.90% of the population voluntarily declaring themselves as ethnically Russian, the Constitution declares Russia is a multinational (multiethnic) state and named “multinational people of Russia” as a sovereign nation (i.e. not ethnic Russian, officially Russia is not a nation-state).

The Russian word used for citizens of Russia is different from the word for ethnic Russian and other languages often do not distinguish these two groups. There are two Russian words which are commonly translated into English as “Russians”. One is “русские” (russkiye), which most often means “ethnic Russians”. Another is “россияне” (rossiyane), which means “citizens of Russia”. However, in English, this distinction is absent. Both Russian citizens and ethnic Russians are referred to simply as Russians.

And it’s been like this since the 16th century at least. This made it possible to integrate not just people of different ethnicity, but also people of different faith and culture. Swedes, Finns, Germans, Tatars, various Siberian peoples and even peoples with a very strong national identity such as Armenians and Georgians, all saw themselves as Russian. One of Russia’s first Tsars was an ethnic Tartar, born Muslim, who later converted to Orthodox Christianity, and became Tsar Simeon Bekbulatovich.

Since then, even many foreigners, especially Germans and to a lesser extent French came to Russia and integrated into Russian society. This inclusivity, practiced a millennium before such an idea ever reached the modern virtue-signaling West, helped Russia to become a true superpower. In addition to the already mentioned people who lived in the Russian Empire, there were many others who were oppressed elsewhere and chose Russia as their new homeland. Black Ethiopian slaves captured by the Ottoman Empire were bought by Russian Emperors and nobles and freed.

Russian Count, Sava Vladislavich-Raguzinsky, an ethnic Serb in Russian service (another crucial non-Russian) bought off one of such Ottoman slaves. The slave was the Ethiopian-Cameroonian, Abram Petrovich Gannibal. This naturalized Russian was provided with an excellent education. Gannibal chose military service and rose to the rank of a General in the Russian Army. He is also a direct ancestor of one of the greatest poets who have ever lived, Alexander Pushkin.

Another interesting fact about Abram Petrovich Gannibal is that he actually inspired another great Russian to become a soldier. Just a sickly boy at the time, this Russian’s conversation with General Gannibal inspired him to join the Russian Army. The boy was none other than Alexander Suvorov, one of the greatest military commanders in world history, known for being just one of a handful of commanders never to have lost a battle, despite serving in the Russian Amry for full 54 years.

As we go further, we find German, Dutch, Armenian, Georgian, and even Scottish Russians who were crucial in turning Russia into a superpower. The trend continued in both the USSR and Russian Federation. One of the most important leaders in Russian history was most definitely Joseph Stalin. Despite many controversies surrounding his personality, this man led Russia through one of the most difficult periods in its history.

Gaining power in 1924, Stalin inherited a relatively weak economy and a country which was in need of urgent modernization. By 1953, Stalin turned the nearly semifeudal country into a true superpower that just defeated the mighty Nazi Third Reich, obtained nuclear weapons and became a premier space power, with an economy second only to that of the United States. His real name was Ioseb Besarionis dze Jughashvili, and he was an ethnic Georgian.

In modern-day Russia, one of the most prominent leaders is Russian defense minister, Sergey Shoygu. A beloved commander, one of the most prolific reformers and a man who virtually single-handedly turned Russia’s cumbersome Soviet-style military into a bit smaller, yet much more effective and a deadlier military force capable of taking on any possible threat to Russia’s security, be it the entire NATO or the subversive terrorists. Sergey Kuzhugetovich Shoygu is of half-Tuvan descent.

Another nationalist boogeyman the modern West just loves to use for its own virtue-signaling. Serbs “the butchers, genocidal savages”, etc. Since the early Middle Ages, Serbs, just as Russians were always quite inclusive. Serbian Emperor Dushan the Mighty proclaimed himself Emperor and Autocrat of the Serbs, Greeks and Bulgarians. During the Ottoman invasion, Serbs fought the Turkish invaders alongside Greeks, Bulgarians, Vlachs (modern-day Romanians), Hungarians and others. All these people were treated equally and they equally contributed to the struggle against Ottomans.

After Serbia liberated itself from Ottomans in the late 18th and early 19th century, this practice was continued. In the early 1800s, Serbian Constitution granted equal rights to all citizens regardless of their ethnic background, while slavery, which the Ottoman invaders brought and which never existed in any independent Serbian entity, was outlawed immediately upon liberation. During this time countless Czechs, Slovaks, Greeks, Poles, Romanians, Bulgarians, Lusatian Serbs (now known as Sorbs) from eastern Germany, as well as many Germans, came to Serbia as they had more rights in Serbia than in their own home countries.

This practice continued even during the 20th century, when many Muslims, Jews and people of other faiths identified as Serbs of Muslim, Jewish or Roman Catholic faith. The vast majority of the population was always Orthodox Christian, but unlike in the neighboring empires, there was no forced conversion or forced Serbianisation. During World War One, many French, Irish, British, Russians, Czechs, Slovaks, Poles, Romanians and Lusatian Serbs (with General Pavle Jurisic being the most prominent one) fought for the liberation of Serbia.

After the war, instead of just uniting the liberated Serbian lands, Serbs went on liberating other South Slavs and formed Yugoslavia, renouncing their own statehood and integrating it into a completely new idea. Despite this, Croats, Slovenians, and others chose to keep their national identity. In Serbia, now just one of the regions of Yugoslavia, far from encompassing all Serbian lands, minorities were given an unprecedented level of territorial, cultural and linguistic autonomy.

In some cases, this proved to be a grave mistake and was used against the central government and primarily by Croats, Bosniaks, and Albanians, who all committed a despicable joint genocide against the Serbs in WW2. After the war, the new communist authorities strived towards creating even more ethnic groups at the expense of Serbs. And yet, Serbs showed almost no opposition to this. More rights were given to these new groups.

During the 1990s, this was used against Serbia again. And again, mostly by Croats, Bosniaks, and Albanians. However, unlike those groups, other groups remained not just law-abiding citizens but also proved their loyalty to the country. Hungarians, Romanians, Vlachs, Czechs, Slovaks, many Muslims, and other groups fought for Serbia and against the NATO invaders and the already mentioned treacherous groups which voluntarily became NATO’s cannon-fodder.

The best examples of loyal ethnic minorities during the 1990s came from the Hungarians. Living in northern Serbia, the predominantly Roman Catholic Hungarians have been living side by side with Serbs for over a thousand years. The history of Serbian-Hungarian relations was mixed, yet in general, the two peoples lived in good relations, save for the on and off conflicts during the 19th and early 20th century. The relations were finally cemented after WW2. Since then, Hungarians have been among the most loyal ethnic minorities in Serbia.

During NATO aggression, Hungarians in the Serbian Army bravely fought for their Serbian homeland. One of the most striking examples is that of a 20-year old ethnic Hungarian soldier of the Serbian Army, Tibor Cerna (1978-1999). During actions against Albanian terrorists, he voluntarily left his shelter with the intention of helping the Serbian Army sniper team to discover the position of an enemy sniper, presumably a NATO SpecOps soldier, who had been killing many of Tibor’s comrades for days. Shortly after he stepped out into the open, a bullet struck his chest. Although badly wounded, he managed to keep himself on his feet until the next shot, which hit him in the neck. Thanks to his heroic sacrifice, a Serbian sniper discovered the position of the enemy sniper and eliminated him.

Tibor as a highschool graduate, just before he was drafted to defend Serbia against NATO aggression

Tibor served an entire year of his mandatory service, here pictured after fortifying his position

Pictured here is a bust dedicated to Tibor Cerna, while the picture to the right is that of Kata Cerna, Tibor’s mother

Another ethnic Hungarian hero of Serbia is the legendary commander, Colonel Zoltán Dani, known for the incredible feat mere days after the NATO aggression against Serbia started. Dani’s brilliant feat happened while he was the Colonel of the 3rd battery of the 250th SAM Brigade, which under his instructions shot down NATO’s state-of-the-art F-117 Nighthawk stealth bomber near the village of Buđanovci on 27 March 1999. The hit was achieved with the 1960s-era Soviet S-125 Neva SAM system. This is the only known shootdown of a stealth aircraft to date. 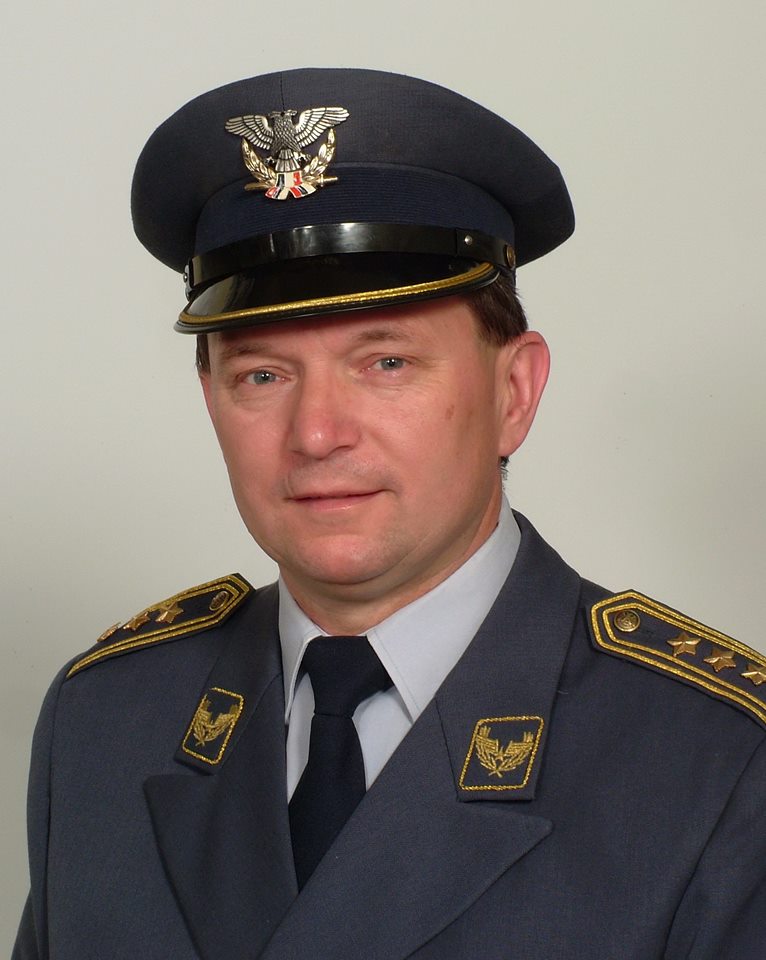 In the present-day, Serbia’s Hungarian community is no less patriotic. Another great man, an ethnic Hungarian and a true Serbian patriot is Mr. Zoltán Csala. Mr. Csala, who lives abroad, is one of the founders and leaders of the Guardians of Cyrillic, along with his other Serbian compatriots. The goal of the Guardians of Cyrillic is to promote the use of the ancient Serbian Cyrillic script, thus making a crucial contribution to the preservation of one of the cornerstones of Serbian culture.

Freedom Convoy 2022 in Solidarity with the Truck Drivers: What Canada Needs Is the…

Freedom Convoy 2022 in Solidarity with the Truck Drivers:…