DAMASCUS – At least 785 foreigners affiliated with the ISIS (ISIL or Daesh) terror group managed to escape a camp where they were being held following Turkish shelling on Sunday, the Kurdish militants in northern Syria claimed. In an apparent reference to Ankara-backed militants, the Kurds announced in a statement that “mercenaries” had attacked the camp where “Daesh elements” in turn attacked camp guards and opened the gates.

An official with the Syrian Democratic Forces (SDF), meanwhile, stated that Kurdish-led security forces do not have enough guards for the Ain Issa camp that holds families of ISIS militants and dozens of them have escaped since Turkish shelling struck the area. Already weakened by the redeployment of forces to front lines, the guarding of the camp was further depleted on Sunday when Turkish shells crashed nearby, prompting some of the remaining personnel to flee, SDF official Marvan Qamishlo noted.

“The guarding is very weak now,” he told Reuters, saying that there were now just 60-70 security personnel at the camp compared with a normal level of no less than 700.

The camp holds some 12,000 displaced people including some relatives of ISIS militants and ideally would require 1,500 guards, he stated, noting, “We don’t have this sufficient number.” 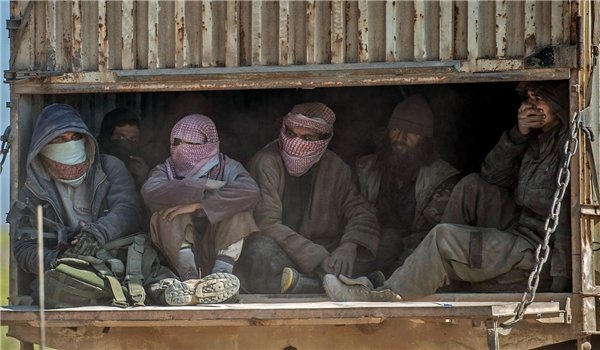 Citing sources in the camp at Ain Issa, Syrian Observatory for Human Rights Director Rami Abdulrahman stated there was a state of “anarchy” inside. Kurdish militias had announced that the Turkish military operation in northern Syria had revived the terror group after five Takfiri militants broke out of a prison in the region on Friday. The shelling of the camp at Ain Issa, north of Raqqa, represented “support for the revival of the Daesh organization once again”, the Kurdish-led administration for northern and eastern Syria stated.

On Saturday, SANA reported that US forces moved 80 foreign detainees affiliated to the ISIS terrorist organization from al-Shaddadi prison, southern countryside of Hasaka, into Iraq. Turkish military operation on the Syrian territories continued for the 5th day on Sunday. The UN said Ankara’s assault has forced 130,000 people to flee their homes, adding it was preparing for that figure to more than triple.

US President Donald Trump has for several times threatened to set prisoners from Europe who joined the terror group in Syria and Iraq free at the EU’s borders if they refuse to take back the captives. Thousands of people, including men, women and children from more than 50 countries, are lingering in detention camps in northeastern Syria, held by Washington-backed fighters.

Damascus has censured Turkish President Recep Tayyip Erdogan’s latest remarks concerning his “keenness to protect Syrian people and their rights” as far from reality, emphasizing that the Damascus government will respond to Ankara’s offensive into the northeastern part of the country through all available legal means.

The Turkish military had launched two cross-border incursions in northern Syria, namely “Euphrates Shield” in August 2016 and “Olive Branch” in January 2018 with the declared aim of eradicating Kurdish militants and ISIS terrorists near Turkey’s borders.

Addressing the 74th session of the United Nations General Assembly at UN headquarters in late September, Syrian Foreign Minister Walid al-Muallem lashed out at Turkey for providing “terrorists with all forms of support, including weapons that are more sophisticated”, stating that Ankara’s action undermines all agreements reached during the Astana talks in Kazakhstan.

“If Turkey is truly committed to the security of its borders and the unity of Syria, as it claims, it must choose whether to respect the Astana understandings and the bilateral agreements on counter-terrorism to secure the borders and to withdraw its forces from Syria, or to be the aggressor and the occupier – and to face the consequences,” he noted.

Muallem stated that Syria is resolved to rid the entire country of foreign-sponsored Takfiri militants. In a recent interview with Al-Mayadeen television news network, the top Syrian diplomat said “every inch” of the Syrian territory will be liberated from terrorists very soon.