Well, LOL. Now Dr. Michael Baden has admitted there was NO DNA TEST done at the autopsy of the alleged body of Epstein that was brought to the NYC Medical Examiner’s office, where Baden oversaw the autopsy.  No fingerprints taken, no dental records, no photo of the dead body’s face. No DNA test. The ONLY ID of the body was Mark Epstein saying it was his brother, Jeffery. Oddly enough, for some reason, not one single MSM reporter or commentator had asked this MOST IMPORTANT QUESTION IN THE CASE, for almost 3 months, until Jason Goodman, an independent journalist put Baden on the spot by calling Baden and recording the call, asking specifically about a DNA test.  The video of the call was published Nov. 12th.

The body was “identified” based solely on the confirmation of  Mark Epstein, Jeffrey Epstein’s brother, who had just inherited $578 million based on his brother’s “death”. Mark Epstein is the majority owner of 301 E. 66th St in NYC, an apartment building that has been “tied to the financier’s alleged New York trafficking ring.” Specifically, several apartments in the building were “being used to house underage girls from South America, Europe and the former Soviet Union,” according to a former bookkeeper employed by one of Epstein’s main procurers of underage girls, Jean Luc Brunel.

So, Mark “Puggie” Epstein, potential suspect and co-conspirator in Jeff’s sex slave racket, whose personal fortune was previously declared at a paltry $8 million, by identifying the body as his brother, closes the investigation that could lead to his own indictment, and inherits $578 million from his “deceased” brother in the deal. And so “Puggie’s” word is enough? No other means of identification are required or used? HOW ABOUT FINGERPRINTS? (The FBI must have had a set of Epstein’s fingerprints laying around somewhere. Right?) HOW ABOUT A FACIAL PHOTO OF THE DECEASED? (Mark Epstein’s ex-wife is a professional photographer in Manhattan.) HOW ABOUT DENTAL RECORDS OR DNA?!

And understand that the MCC New York federal prison where Epstein was held is federal property. Crimes or suspicious deaths that occur there are under the jurisdiction of the FBI. Epstein’s “death” was the first alleged suicide reported at MCC New York in 13 years. By “dying”, (and by “dying”, in quotation marks, I mean faking his death), Epstein (Just exactly like Kenneth “Kenny-Boy” Lay) escapes prosecution on crimes that could have imprisoned him for life, saves himself hundreds of million of criminally obtained dollars, which he now gets to bequeath or rather, keep, and squashes the investigation into the clients and co-conspirators who were involved in sex trafficking, child rape and other crimes probably beyond the imagination of normal human beings.

The “facts” that both of the guards tasked with monitoring Epstein “fell asleep”, both of the cameras “malfunctioned”, along with the fact that he had been on suicide watch and was then taken off, all point to VERY suspicious circumstances. Trump’s Attorney General William Barr said he was “appalled” by Epstein’s death and that the FBI and Inspector General were “investigating”.

It was Barr’s DOJ lawyers who just recently (this year) argued against voiding the Federal Non-Prosecution Agreement made by Acosta in Epstein’s Florida sex trafficking case 12 years ago, which would have prevented any further federal prosecution, and they also argued against the release of the 2,000 pages of evidence and testimony in the case. But according to Barr, “The investigation is ongoing”…

How can it be possible that the FBI did not even reliably identify the body before it was turned over to his brother, and whisked away to who knows where? The identity of the body is THE most important fact in the case. Without that, all other “facts” are moot. Can you really believe the FBI is that stupid? I can’t believe anybody is that stupid. But apparently so… Then again – 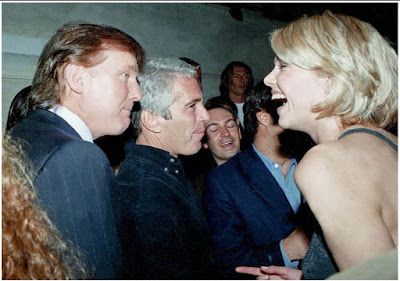 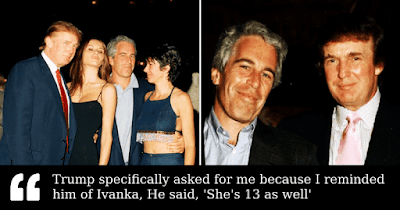 And here’s a bombshell you probably haven’t heard about yet… And maybe never will again. 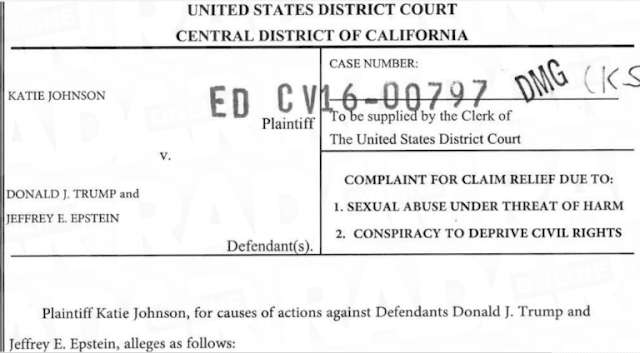 Think this is “fake news”? Here’s the link to the full complaint, filed in 2016. Funny how this never made the “real” news, right?  In horrific detail, Katie Johnson charges Trump with raping her multiple times in the summer of 1994, when she was 13 years old. In 2002, Trump told an interviewer,  “I’ve known Jeff for fifteen years. Terrific guy. He’s a lot of fun to be with. It is even said that he likes beautiful women as much as I do, and many of them are on the younger side.”  2002 minus 15 is 1987. This means Trump was having “a lot of fun” with Epstein way before 1994. The New York Times has also reported that Trump and Epstein took part in a “party” where they were the only two male guests along with 28 women. That sounds like a LOT of “fun”, doesn’t it? Think they kept their clothes on?

It looks like Trump is as much a dirty (and compromised) pervert as Bill Clinton, who is as dirty as Epstein himself. Epstein almost certainly has heavy duty kompromat on both of them. So both of these degenerates (Clinton AND Trump) have ample reason to want  Epstein and his case to just “go away”.  And that is exactly what happened, and is happening, right now, right before your eyes. And they’re not just feeding you bullshit, they’re rubbing it in your face. And laughing while they do it, because they know that the vast majority of US serfs are too stupid to know, or too cowardly to admit, that 2+2 = 4.

I recently read the first MSM article addressing the possibility that Epstein had neither been murdered or committed suicide. From the Mooney owned and controlled Washington Times, a disinfo operation since its inception almost 40 years ago. The article, “The Ultimate Epstein Death Conspiracy: He is Still Alive“, goes on to propose the abjectly imbecilic theory that Epstein was whisked away by the Feds in order to de-brief him for the upcoming trial of all his sleazy child-raping clients, and the fake death was just an added layer of security.  Epstein is alive alright, but he is protected by Trump and the US gov as much as by the Clinton Mafia, Buckingham Palace, and the billionaire punks of Silicon Valley. Because Epstein has some bad shit on ALL of them.  He’s alive alright, but he’s not talking, and that’s why he’s still alive. And he, or rather his dead man’s switch, isn’t talking because he’s still alive.

At best, Epstein and the scum he served got away with hundreds of child rapes, but logic and history indicate rape is only the least of it. It is a fact of human nature that the more perverted you are, the more perverted you become. Raping children leads to raping sisters, to raping twins, to raping 12 year old triplets.  But where do you go from there?  What’s the use of having absolute power over someone if you can’t use and abuse it? Ask Dean Corll, ask Ted Bundy, ask Charles Ng, ask Oscar Dirlewanger.  Ask Tiberius or Caligula, ask  Abu Bakr Al-Baghdadi, ask Trump and Clinton and Jeffrey Epstein, and go ahead and ask Mark Epstein while you’re at it. And ask all their clients and protectors. “Power corrupts, and absolute power corrupts absolutely. Great men are almost always bad men.”  – Lord Acton.

There is another observation about power that must not be forgotten when regarding the “powerful” scum who make up Epstein’s coterie. It is from Orwell’s “1984”, the most succinct definition of power there is, although the Cambridge Dictionary definition comes pretty close too. In “1984”, when Obrien has Winston strapped to the chair in Room 101, he asks Winston, “How does one man exert power over another?”  Winston answers, “By making him suffer.”  That’s how Epstein and his scum exert their power over the children they tortured and abused. By making them suffer.

The Roman emperor Tiberius used to like to screw everything and everybody, (check the link above) especially little kids. Just like Epstein and his scum. Tiberius had a group of kids called his “Minnows”, who would, among other things, nibble on im as he swam nude in his imperial pool. When he tired of them, he would simply have them thrown off a cliff. You know, one like the one next to Epstein’s “temple” on his private island. You think the Roman emperor Tiberius had more power or was more perverse than Epstein, Clinton, Trump, et al? No, Tiberius and Caligula are their role models. They have or crave absolute power, and absolute power corrupts absolutely.

And ask yourself what you really believe these absolutely corrupt monsters, these bad men are capable of. These tech billionaires, these “ubermenschen”, many of whom openly call themselves “God’s Chosen People” (and what does that make the rest of us?) these “smartest guys in the room”, these “Herrenvolk”, these masters, these kings and princes, they see us normal humans as livestock to be exploited for their profit and pleasure, to be harvested for organs, experimented upon, used as slaves, and then to be exterminated as insects when we are no longer useful or profitable. And that is why I hate them. They are the mortal enemies of Humanity, and they are winning. And I can tell you why they are winning.

When what’s left of humanity stands dumbly by while they, their children, their future and their world are raped and devoured to death, who are too stupid to see what is blatantly thrust before their own eyes and rubbed in their faces, who are too cowardly to see the truth, much less do anything about it, who willingly follow the Judas Goat, perhaps their masters are right. Einstein once made a quote about human stupidity being infinite. If he’d been smarter, he’d have mentioned human cowardice and depravity as well.

Armageddon is upon us, the war between Good and Evil in the metaphysical and physical sense. We each must decide which side we will be on, and act accordingly, or our actions or inactions will decide for us and speak for us. We are all going to die, so what matters is what we do while we live. We can stand and fight on the side of truth and justice, even if it is difficult or dangerous, or we can betray ourselves and our children, our future and humanity, and follow the Judas Goat into oblivion.
We are what we do. If we do nothing. we are nothing, and the masters will treat us accordingly.

Will Evo Morales have a chance to return to Bolivia?