EXCLUSIVE REPORT: In the hills of Chechnya – PART II

By Vladimir Gujanicic – Knowing the devastation of Grozny from just ten years ago, the city itself made quite of an impression. The next day, our Chechen hosts took us around a rural part of the country, far out of the city. Progress and new buildings are also visible in the suburbs and villages we passed through. Most of the road we passed was asphalted, and the new gas network could be seen around the houses. The houses are mostly of recent construction but there are also a few older ones.

Characteristic are the high walls that hide the yard from the view from the road. That Chechens are a patriarchal society is visible at every turn. Four black jeeps at once stopped in the center of a village where an elderly Chechen man was walking. The Police General and his security guard approached the old man and greeted him warmly. I asked our hosts why they did this, the answer was that it was a show of respect for one of the village elders. That surprised me a lot.

Our destination was a place where we were to attend the opening of a smaller bridge in a rural part of Chechnya. As we approached that distant spot, the asphalt disappeared, but the surface of the road was still visible. Our escorts said that the works were suspended during winter, but that asphalt would pass there as early as next year. At every turn, we saw towers along the road and a small guardhouse built in the mountain. They are indeed a feature of Chechnya. They guarded the roads and warned of the advent of enemy armies. Some towers were built by Chechens and some were built by the Russian Imperial Army. Considering the technologies and the resources used at the time, they look really impressive. 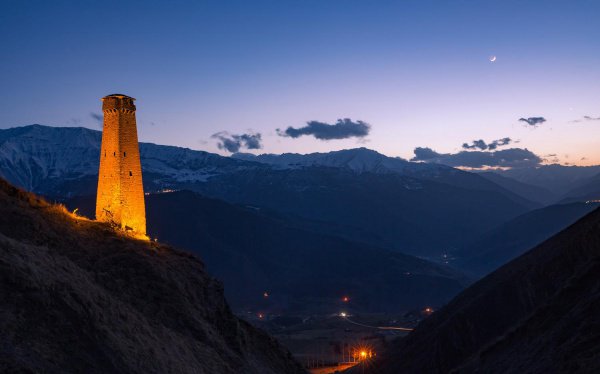 As soon as we arrived at the bridge opening site, there was a modest ceremony. Police General Apti sat with village elders as dozens of people from the local village gathered around them, for the opening of a bridge that meant a lot to them. Paying respect to the elderly in Chechnya cannot only be called politicism for the media, but it is also a reality. Honoring the tradition, the Chechen elder cut the ribbon, after which they all crossed the bridge, marking the opening.

Hospitality proved to be of the highest level this time as well, as we were served traditional Chechen food together with our hosts. General Apti did his best to show us Chechen traditions and food at its best. After lunch, the general prayed with the local villagers, ending the ceremony.

We stopped briefly at a beautiful mountain home, after which we continued our journey to the border with Georgia into the less accessible parts of Chechnya. The presence of Russia’s federal forces could be seen here directly for the first time. In the city of Grozny, more precisely around it, there are separate army bases in which the soldiers live completely apart from the local population, or better said, in their own “towns” and facilities. However, there are checkpoints on the way to the border and at the border itself. Passing through the mountains, we passed by one of the FSB bases and one smaller Russian army checkpoint, after which we continued our journey to the beautiful village of Nikaroy. This abandoned village is over 1500 years old and is breathtakingly beautiful. The method of joining the stones the buildings are made of and how it managed to preserve them for such a long time is not completely clear. The village was built at the same time as the fortress, in an almost inaccessible location. Landscapes with old towns and rough terrains are perfect for hikers and adventurers. Whoever visits Chechnya must visit Nikaroi. It is not the only abandoned village, and there is an abundance of such places in Chechnya.

The way back was exciting, returning at night through the mountains and ravines in the dark, I thought about how the war was raging in this country not so long ago. From the jeep, I saw a jackal passing by. Seeing a wild beast in these areas is nothing special. We ended the trip at a mountain restaurant. We have been used to the hospitality of Nohchi (the Noah people as the Chechens call themselves) since our arrival to Chechnya. At the end of the evening, General Apti brought in a great guitarist who played several Chechen songs in Chechen and Russian, which was an end of a really exciting journey on our second day.