As the missiles began to fall yesterday afternoon NZ time, I was struck by a few observances. Both of how much some things had changed – and, within those, how much yet disappointingly remained the same.

Almost seventeen years ago, in 2003, we gathered at high school to watch opening salvos of the American invasion of Iraq on a tv set up in the library.

Today, we are watching missile salvos over Iraq again … only this time, we are doing so largely via twitter and other forms of regularly updated online media.

Partially, it is because the televised broadcast has gone the way of the wireless radio-set (upon one of which, The Rev. Rolinson still recalls our proudly French forebear listening with sadness and then announcing that Dien Ben Phu had fallen as the high-water mark of another country’s out-of-time imperialist programme). And partially, it is because you find out so much more by going off and hunting out primary sources and secondary commentary out there in the wilds of the internet than you ever do simply watching and awaiting for special television bulletins or the 6 o’clock news.

Which does not, of course, mean that it’s assured to be more correct than what is visible via official channels – but given the nature of some of the stuff either turning up twisted upon them, or worse, not turning up at all, it doesn’t necessarily mean you’re much the worse off, either.

One prominent example of all of this ‘in motion’ concerns the character and the dispositions and the deeds of the figure at the heart of all of this. Major General Qassem Soleimani – now eternally of the Iranian Revolutionary Guard.

You read a lot of newspapers, see a lot of public newscasts quoting American politicians or talking heads, and you start to come away with one, overwhelming and throbbing impression. That even if you’re not wild about another American fireworks-display-into-fire-out-of-handling in the Middle East, that the guy was somehow monstrously “evil”. Yet it goes further! 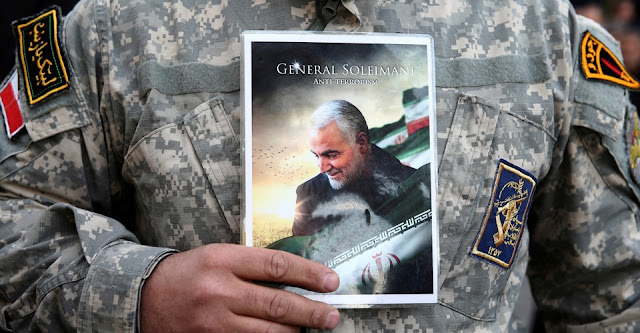 The perverse alchemy of ‘official narratives’ is plainly visible in the way in which a man who had spent much of the 1990s fighting the Taliban, and much of the past decade fighting ISIS and otherwise pushing back against Saudi-emanated objectionable forces (including Al Qaeda franchises I can think of in at least three countries offhand) …

… is now attacked and castigated as a “terrorist”, and some kind of latter-day Osama bin Laden. [I had somewhat less overt sympathy for Saddam, but the man found himself afflicted by a similar downright pernicious no doubt intentional mislabeling. He, too, had spent years opposing many of the same forces as the Americans, and had directly offered to assist after both 9/11 and the 1993 World Trade Center bombing in fighting back against Al Qaeda – none of which stopped him being linked in press reports and in Presidential rhetoric to exactly those terrorists aforementioned. Gosh, it’s almost like some words have meanings that simply convey “you’re supposed to actively hate that guy”, and little more.]

Now, “terrorist”, to be sure, does not simply mean “Sunni extremist” … but, then, it certainly does not just mean “person incongruent with the active extension of the power and agenda of America And Friends ™”.

And that is only one of a few areas in which the strange radioactivity of embedded mis-perceptions can be observed making itself known in relation to Iran in recent days. 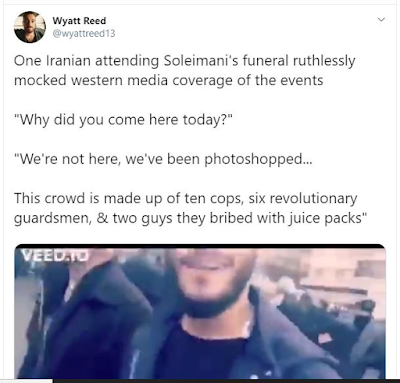 And while I can understand thinking that massive demonstrations which happen to be pretty politically and optically potent might be staged (after all, you just have to look back at some of the trick photography and such utilized in some recent Anglosphere events) … I suspect rather strongly that there is something else going on here.

Several days ago we heard from a wise Iranian cleric who asked who the equivalent figure to Soleimani was in Western culture … whom the Iranians could kill and have it carry a similar resounding impact in all of our collective psyche (“…Spongebob?”), noting that almost all the modern-day ‘heroes’ of the West are made up, and highly animated only in the two-dimensional sense (possibly involving a Korean sweat-shop). 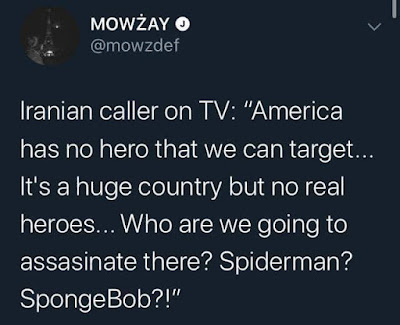 Well, not only was he right about that, but he also gave voice to just why some people frequently (yet not always) ‘of a certain age’ and/or political disposition are having such great difficulty grasping that actually, yeah, a lot of Iranians, Shi’ites elsewhere in the world, and other people entirely are annoyed about what has occurred and have been actively expressing and demonstrating their feeling upon the matter.

I do not intend to turn this into a fully-blown lecture-discursion upon the Disenchantment of the World, but it could be fairly suggested that this minority of disbelieving is perhaps symptomatic of growing up in an era wherein the last time something like that happened in the Anglosphere West was Beatlemania. 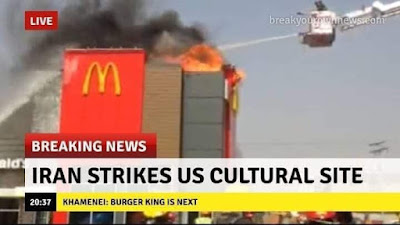 To mash up Grettir’s Saga and Nietzsche:

“BARE IS THE BACK OF THE MYTHLESS MAN”

Also, speaking of ‘myths’ [here, somewhat, in the sense directly opposite to that in which I more usually mean it … ], take a look at Netanyahu earlier in the week. 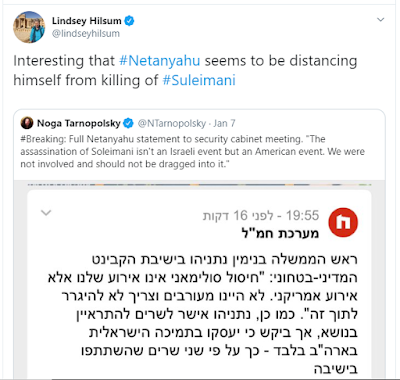 If there is one thing that Netanyahu is (and there are .. many), it is a survival expert. That a man such as he who has spent quite some effort attempting to stir up fear of Iran in recent years, would be backpeddling frantically and attempting to put distance between his country and the killing of Soleimani … I think that it speaks volumes as to the actual realities of the situation.

In specia, serving to undercut somewhat the illusory “all be home by Christmas” mis-thusiasm being put forward by the principle instigators of this now-escalating conflict safely ensconced all the way over on the other side of the Atlantic.

That, too, was the hubristic attitude which characterized the previous American adventurism in this region, also on trumped up charges against an “Ira-” country, almost deliberately flouting international law and norms, and to general opposition from experts and ordinaries across the globe.

All of which has me reaching for Marx’s well-worn quip that:

“Hegel remarks somewhere that all great world-historic facts and personages appear, so to speak, twice. He forgot to add: the first time as tragedy, the second time as farce.”

Curwen Ares Rolinson has endured almost a decadeÔÇÖs worth of experience at the highest levels of New Zealand Politics; serving as a prominent public face of left-nationalism in his home country before making the transition to political journalism and work in the PR field. His writing has been published in a wide array of outlets ÔÇô ranging from his award-winning ÔÇ£Sex, Drugs & Electoral RollsÔÇØ magazine column, as well as the Official Gazette of the Bolivarian Republic of Venezuela. He's a regular contributor at Fort Russ News since 2016.

‘Death Is As Nothing Compared To Vindication’ – On Soleimani and the Soleimani Doctrine, in 2018 and the Present