Most believe the reason behind Iran’s shooting down of flight 752 from Tehran to Kiev has been cleared up. The narrative that it was an unfortunate accident (mainly) by a single individual: Islamic Revolutionary Guard Corps Commander Hajizadeh is being widely accepted. The message was further broadcast by Major General Hossein Salami, chief of that same IRGC.

However, there’s still plenty of questions which are left unanswered which, according to me, return part of the veil which most believe to have been uncovered.

Although flight delays happen all the time and are nothing to fret about in and by themselves, given the outcome of 752 we should ask the question why the delay was there. According to Reuters‘ quoting of the president and CEO of the airline, Mr. Yevhenii Dykhne, the flight was delayed because “it was too heavily loaded”. Aviation experts know that any which flight does not only hold the passenger’s luggage but also parcels, mails, diplomatic packages and so on. Some sources I have heard suggested that 9 bags were taken out of the cargo hold (which is distinct from the passenger luggage hold).

The questions become: was the decision to stall the aircraft a decision by the captain himself? If it was not, which cargo was offloaded? Was this important material which could not be destroyed?

Why Use Two Missiles?

According to reports flight 752 was shot down using the Soviet / Russian developed 9K331 Tor-M1 low to medium altitude missile system. A system which achieves a 100% success rate against “small, high-speed targets”. If indeed two missiles were used it could mean that the airplane was not inadvertedly targeted but quite specifically as well as with the absolute intent of bringing it down.

If that hypothesis holds true, then the question becomes: what or who was in it which made this obliteration necessary?

A civilian airliner being misunderstood as being a “foe”-target – as in the Friend-Or-Foe denomination often used in military jargon – is highly unlikely as any which aircraft before taxiing (and certainly before take off) out from the terminal to the Terminal Control Area (TCA or TMA for “Terminal Manoeuvering Area”) is required to switch their transponders to ON. Although old technology, it does its intended job (identifying friend from foe) quite well. Note that the airplane was not even above 3000 feet high.

An advanced missile defense system like the Tor-M1 should be able to distinguish a civilian airliner from anything else quite easily based on these IFF transponder codes. The system would need to be specifically overridden to get it to target civilian, transponder-on, aircraft.

This leads to the following questions: if indeed the aircraft was flying with transponder on according to IATA regulation, then who decided to override the Tor-M1 complex’s ground-based IFF interrogator? Alternatively, with transponder on, is there a possibility the Tor-M1 system was compromised through outside hacking or jamming so that it did not pick up on transponder codes?

Moreover, these systems are more likely to identify incoming targets which this plane surely was not. It was outbound. We may well suppose that the Tor-M1 software is able to identify a climbing object as being one which isn’t “foe”. Again the question would become: why has it been overridden with not one but two missiles?

Lastly it can never be ruled out that the pilots forgot switching on the transponder code right before take off. This is what the recovered black boxes should be able to rule out. In case the pilots did not forget the item on the checklist, could it be that the transponder was compromised or jammed?

I can not help but think that the level of immediate apology from the Iranian government is odd. It feels like they want to bring the alleged perpetrators to court before any more investigation is held and the root cause identified. There’s two potential reasons for this: either Iran is telling the truth and Flight 752 has been inadvertedly shot down as per the official narrative. In this scenario they indeed know full well who the culprits could be…

Another possibility exists though: one in which Iran is actively trying to cover up a genuine reason why the aircraft had to come down. I addressed the issue of cargo above, but there is also the passengers themselves…

Two of The Passengers Have Been Photographed Close to Soleimani

In the days after the January 8th tragedy pictures emerged of some of the passengers. The Globe and Mail keeps quite a detailed list up to date. It’s been correctly noted before that over 70% of these passengers were Iranian, many of these carrying a dual nationality which allow the media to state there were many Canadians and Ukranians on board. 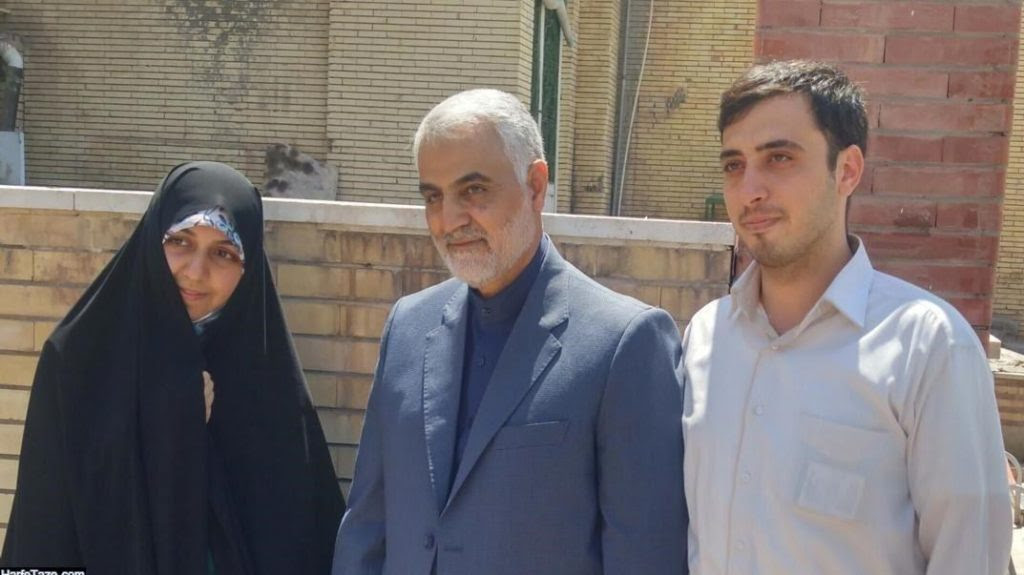 However, it’s noteworthy to briefly stop with some of them who have been pictured with the assassinated General Soleimani. Both 27 year old student Zahra Hassani Saadi as well as her 32 year old husband Mohammad Salehe were on the plane. Both of which were students at the Sharif University.

Given Soleimani’s assassination only a few days prior and given the other questions already asked one stands to wonder if these two persons posed a danger to the Islamic Republic of Iran.

This Aircraft Was Shot Down on Purpose and Planned

I am not proclaiming that the clickbait headline right above is the single truth about Flight 752 but given the above questions it does remain a possibility. I strive to feed the readers with alternative ideas. Questions which can be asked about events on the world theatre.

Shooting down a plane so close to the airport and inside the TMA / TCA is almost impossible to do by accident. The plane was still within visual range as the eyewitness videos show. Mind that these are eyewitness videos and that the airport tower would have been monitoring the flight even more closely. A mistake like this is way more likely to happen when the aircraft is on route or on cruise altitude.

All this to #makeupyourownmind with.

Civilian PlaneFalse FlagFlight 752GeopoliticsIranMilitaryplane downingSoleimani
0 3,642
Share
Subscribe to our newsletter
Sign up here to get the latest news, updates and special offers delivered directly to your inbox.

Joris De Draeck, creator of PlanetNews.eu, is a free-lance journalist writing and publishing in both Dutch and English. He follows up on international global conflicts and goes all out against the one-sided Mainstream Atlanticist narrative. He believes at least both sides to a story need to be carried so that you can #makeupyourownmind.

US Trade Talks with China Must Ultimately Fail

On Taking Responsibility For Downing A Passenger Jet