On The Tantalizing Possibility Of “The People’s Prince” 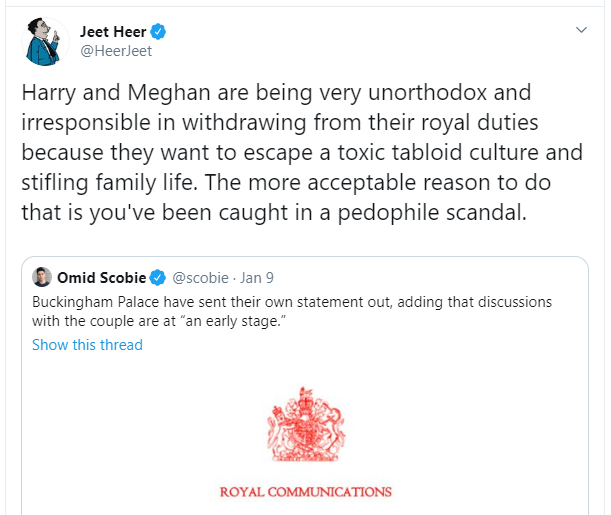 So over the past few weeks, the Royal Family has ‘lost’ two princes. I mean, they’re still there, nobody’s been exiled nor beheaded (potential migration to Canada notwithstanding), but nevertheless two Princes (and one Duchess) have taken a step back from being “Senior Royals”.

The first of these … only did so, not once his position had become “untenable” – but arguably many, many moons post-facto to that point, and following possibly the largest crash-and-burn display of a museum-piece broadcast through media since the Hindenburg re-enactment society (flying under the command of one Captain Will Rogers III [Legion of Merit]) dive-bombed a 1/4th scale model Titanic (built from the hull of the Exxon Valdez), somewhere in the Persian Gulf adjacent to a B.P. oil rig.

And even after that torrid display, incorporating such frankly incredible lines as Prince Andrew claiming that the accusations against him could not be true, because he’s allegedly physically incapable of sweating in stressful situations following being shot at during the Falklands War – the messages being broadcast from the Royal Household were basically that the whole thing was made up nothing to see here stop bullying our poor Andrew.

[To be fair and sure, there is also suggestion that Prince Andrew’s brother, Charles, had a rather more … realistic assessment of affairs, hence the semi-forced step-back/step-down; yet this was all carried out sotto voce and out of the public eye, and apparently running counter to the Queen’s “blind-spot” in reference to her other son.]

The second Prince (and Duchess) ‘lost’ is rather different. Not least because Prince Harry’s approach to “relating to the young people” is entirely unlike that alleged of his uncle. Despite the marrying of a North American tv-star, I think it could be fairly suggested that he might have had a claim to the title “The People’s Prince” [or, in his younger days, and to recall a certain other figure of some notoRoyalty , perhaps the “Prince of Parties”]. And unlike certain of his cousins, he really does appear to have inherited his father’s strong desire to utilize such blessings of prominence and prestige as his birth may have equipped him with, to “make a difference”.

There are many things which could, and already have been speculated as to the reasoning both for the Sussexes’ ‘departure’, and about the ‘establishment’ Royal reaction thereto. You can read those elsewhere.

My own take on it is that it’s perhaps understandable – if it’s true – that leaving ‘unannounced’, and leaving your own father and grandmother and formerly close brother to find out about this via shock newsflashes on the television … might possibly be regarded as a bit impolite. Alternatively, if it isn’t true that that’s what happened – then presenting the departure in this way would be one manner in which you might attempt to grab back ‘control’ of the narrative and some form of resolute moral high ground.

Yet two things stood out to me in both the Sussexes’ announcement, and the ensuing firestorm of “THEY CAN’T DO THAT” emanating from various quarters.

The first of which, was their apparent determination to move towards “financial independence”, and by that I take it they have meant not just ‘paying their own way’, but also the double-meaning of ‘independence’ as entailing not being reined by the purse-strings of the Palace. The “independence” thus sought, therefore, is both for the Commonwealth taxpayer, and from the Commonwealth ‘First Family”s constraining governance.

Perhaps I am cynical, but the implicit suggestion seems to be that the Monarchy only works provided it is a Mono-archy. [there is only one “Archie“, thus far, but that is another pun for another time, I’m sure] . That any attempt to move off and ‘do one’s own thing’, and perhaps look a bit better than the beleaguered Imperial Center, even unintentionally, is therefore an express and tangible threat thereto.

Nobody’s seriously suggesting that Prince Harry is retreating off to a Colonial fortress in order to plot a Schism within the Merry House of Windsor, so as to stage a daring back-door palace-coup and elevate himself to plenipotentiary power as some kind of Bonnie Prince Son of Charlie .. although I am rather taken, quietly, with the notion of Prince Archie running for President of the United States and bringing the whole thing back under Union Jack sodality, at least partially because the Windsor dynasty, for all its faults, is responsible for rather fewer in the number of direct wars of expansionist aggression than the Clinton dynasty, the Bush dynasty, or more recently, the Trump Dynasty [no matter the latter’s previous cultivation of support from the isolationist segments of what would become the Trumpenproletariat].

But, then, the Sussexes don’t need to even contemplate anything so brash in order to upend a fairly large proportion of the extended Monarchial order.

While it was only relatively recently that Prince Andrew et co lost access to their round-the-clock taxpayer-funded protection etc. and other such outlays from the Public Purse, the rest of the Royal Family still being heavily state subsidized has from time to time created some degree of disquiet in certain quarters.

It’s not something I have a huge problem with, for the record; but I can see how two young(ish) royals declaring that at least as applies themselves, “enough is enough” and endeavouring to move towards “financial independence” might cause a bit of consternation elsewhere within the Royal institution.

Overall, I suspect that the reasoning for the annoyance about the Sussexes’ decision has less to do with the idea that they’re doing something potentially rash for themselves and which might end in screaming disaster – for them …

.. and much much more to do with the looming specter that maybe, just maybe, Prince Harry and Wife, are in the process of setting up a new kind of Prncedom for the British Realm. One which is much more self-empowered and self-sustaining, and deliberately sets out to Do Things. You could definitely argue that Princess Anne had beat them to it, of course – but for various reasons, she didn’t get anything like the same attention in recent years for doing so. Probably because she was less public about it, and possibly because she wasn’t so directly proximate to the lineage of succession and public mind’s eye.

Will it work? Who knows.

But I, for one, am rather eager to see what happens next – perhaps we really shall be getting our “People’s Prince”.

Meghan MarklePrince HarryRoyal FamilyUK
0 1,856
Share
Subscribe to our newsletter
Sign up here to get the latest news, updates and special offers delivered directly to your inbox.

Curwen Ares Rolinson has endured almost a decade’s worth of experience at the highest levels of New Zealand Politics; serving as a prominent public face of left-nationalism in his home country before making the transition to political journalism and work in the PR field. His writing has been published in a wide array of outlets – ranging from his award-winning “Sex, Drugs & Electoral Rolls” magazine column, as well as the Official Gazette of the Bolivarian Republic of Venezuela. He's a regular contributor at Fort Russ News since 2016.

Turkey vs. the EU – Erdogan Threatens 500 Year Occupation of Libya

Once Upon a Time in Iraq