Go see for yourself - link inside

Bill Gates’ plan to “save the world” by rolling out a mandatory vaccine for the coronavirus — and suggesting nobody will be allowed to resume “normal life” without a “digital certificate“ to prove they have been vaccinated — is proving extremely unpopular with internet users.

Instagrammers are hitting back against Bill Gates, punishing his posts with thousands upon thousands of angry messages telling him to stop experimenting with the health of “lesser humans” or expect to be charged with “crimes against humanity.”

“Money doesn’t give you any rights against the people. You need to be charged for crimes against humanity,” said schizandramaier in a comment that garnered hundreds of likes. 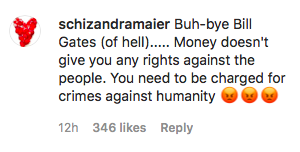 “I look forward to watching your trial!” said ccseyanelee in a comment that also picked up hundreds and hundreds of likes. 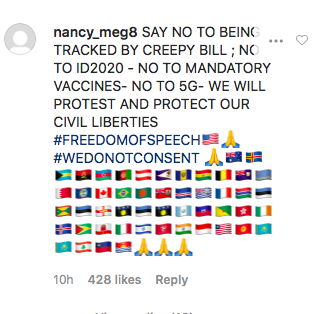 Many users also commented on the fact Bill Gates has been deleting the torrent of critical comments from his page.

Robert F. Kennedy Jr. has also slammed the Microsoft founder over his plans for “dictatorial control over global health policy” and his “messianic conviction that he is ordained to save the world with technology.”

“Vaccines, for Bill Gates, are a strategic philanthropy that feed his many vaccine-related businesses (including Microsoft’s ambition to control a global vac ID enterprise) and give him dictatorial control over global health policy — the spear tip of corporate neo-imperialism,” Kennedy Jr. wrote.

“Gates’ obsession with vaccines seems fueled by a messianic conviction that he is ordained to save the world with technology and a god-like willingness to experiment with the lives of lesser humans.”

Comment: Here’s another compilation of comments. Good to see people are not happy about his plan.

Agenda 21Bill Gatescrimes against humanityEvent 201GatesOfHellGreatAwakeningMAGAmicrochipping
2 16,553
Share
Subscribe to our newsletter
Sign up here to get the latest news, updates and special offers delivered directly to your inbox.

AWAKENING! 100% Proof Positive the Coronavirus Pandemic was Planned by Rockefeller Foundation in 2010

MAJOR: China Warns US is Plotting New Wave of Color…

A False Flag Is Biden’s Only Chance to Win

DUTERTE: ‘We Are Not A Vassal State, We Won’t Stop Projects…

REVEALED: No-Deal Brexit ‘Closer Than Ever’