Due to technical difficulties caused by a cyberattack, we were unable to publish this article on June 2, as it was originally intended.

In memory of the June 2nd, 2014 attack on Lugansk, that killed 8 peaceful civilians, including Inna Kukuruza.

As Reaper attack drones circle the skies of Washington D.C. today, the US military prowls streets across the nation, ready to defend the goddamned US government and its owners and masters from the citizens of the USA, it is a good day to look back in history, in order to see what lies ahead. Because what’s past is prologue…

Six years ago today, on June 2nd, 2014, US-backed Ukrainian nazis made a rocket attack on the administration building in Lugansk, an area formerly in Eastern Ukraine that had risen up and refused to recognize or submit to the neo-nazi puppet regime illegally installed in a murderous coup by the Obama/Biden regime and the Clinton State Department.  In act of abject terrorism that exactly fit the definition of a war crime, a Ukrainian SU-25 attacked a group of civilians gathered peacefully on the street in front. Five women and three men were murdered, with 20 more severely injured by the attack. All were civilians, none were involved in defensive military actions. Unprovoked mass murder by the military against peaceful unarmed civilians. on orders from the USA. What the US government has been doing here for more than half a decade, they are now preparing to do there, inside the United States. What they have done to us, they will soon be doing to you. Come and see…

There was a video made of the aftermath, in which a dying woman who had both her legs blown off politely asked to use a phone in the last minute of her life. The photo below was made from a screenshot of that video. 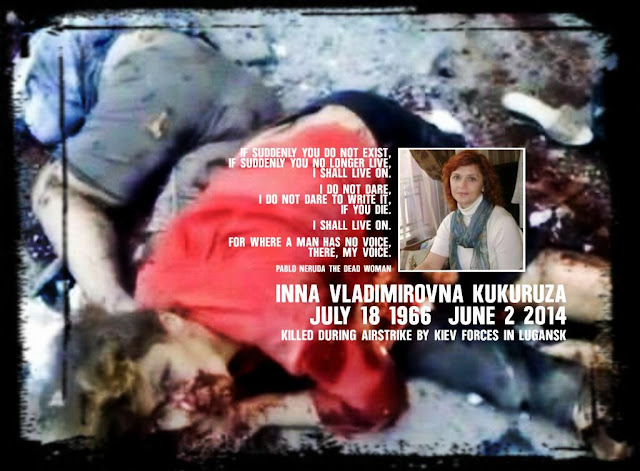 After the massacre in Odessa, on May 2nd, 2014, exactly one month before the attack on Lugansk, I had been seriously considering coming to Donbass to fight the nazi murderers and help defend the innocent civilians who were being murdered there every day. But on June 2nd, when I saw the photo and video of Inna Kukuruza, all questions and other considerations vanished from my mind. I knew I would come, and I knew I would fight, or die trying.

Six years later, the war drags on, still backed by the goddamned US government under the Trump regime, just another fascist scumbag, an even bigger piece of shit than Obama was, and every bit as much of a war criminal. But the same war of military against peaceful Ukrainian citizens, that Obama unleashed and Trump has continued and even escalated, is now being directed homeward, against the citizens of the United States themselves. And the US citizens who have sat impassive and uncaring for 6 long years while a US-backed puppet regime has murdered almost 15,000 citizens whose only crime was to defend their own land, homes and families, will now themselves get to taste the fascist boot, to feel the fist of steel from which the velvet glove has now been permanently removed. And you cannot say we didn’t warn you, and do not dare to have the impudence to say you do not have it coming.

So now here is the lesson – What you have done to others, whether by actively supporting the nazi scum of the Obama and Trump regimes, or by passive and cowardly acquiescence to their crimes, will now be done to you. Like the people of Ukraine, you will now be given the choice of either total slavery and obedience or having all-out war waged against you by the US state and military. The choice is stark and absolute, there are no other options. You may run, or you may hide, but only for a little while, and the day is coming, sooner than you think, when you will have to decide whether you will meet it, along with the nazis of the 21st Century, on your feet or on your knees.

You face the same war and the same enemy as the Native Americans (both North and South) faced against European invaders, the same war and enemies the Soviet Peoples faced in June of 1941, the same war and enemies faced by the People of the Donbass People’s Republics – a war of enslavement and extermination, genocide, a war of annihilation, in which the side that does not prevail will be completely defeated and destroyed. Your choice is literally victory or death. If you fight, you may well be killed, but if you do not fight, you will most certainly be exterminated, or wish you had been.

Being peaceful will not save you. Being innocent will not save you, all your craven obeisance will not save you. Either you will fight, now, or you will live as a slave until your masters decide you are more useful as fodder for other, more useful slaves.  You will be ground up and fed to slaves who will shit you out as they work, onto the floor of a world unworthy of life or of living in, devoid of hope or humanity, where the only and eternal future will be that which O’brien predicted to Winston Smith in 1984. “A boot stamping on a human face. Forever.” So fight, now, or face your future…

Most US citizens will not even consider resistance, won’t even think about it, much less talk about it, much less actually do anything about it. Many are already groveling on their bellies, even before the really hard times begin, willing to lick any hand that feeds it, and run to hug their chains. They will be fed on filth, if they are not simply left to starve, they will be worked like beasts of burden and exploited like livestock, inspected, infected and microchip injected, used as human guinea pigs and harvested for their organs. Their children will be used as sex slaves by their masters, and all will be exterminated like insects when they are no longer profitable or useful.

And all those who willingly accept this fate deserve it.

There are a small percentage of Americans who will stand and fight, even against seemingly impossible odds, even if, like at the Alamo, the odds really are impossible, there are those those who would rather die fighting than willingly submit to slavery and all that it entails. And with them lies the hope, the only hope, not only for their own future and that of their country, but of Humanity itself. These few millions, this small percent of the US population, will retain the right to call themselves true Americans, and more importantly, to call themselves human beings. And though they will face the most diabolical, ruthless and technologically repressive regime that man, machine and money have ever been able devise, the Human Spirit is a powerful force, and capable of victory against even the most formidable odds.

Take a lesson from the Soviet Union, that shattered the world-wide ambitions of nazism only 75 years ago. Take a lesson from the Donbass Republics, whose Heroes stood and fought, even when there was almost no hope of victory or even survival, and continue to this day to do so. What has been done before can be done again, though it will take an equal or perhaps even greater sacrifice. The USSR paid with the lives of 25 million of its citizens to free itself from the nazi invaders, and if the people of the USA have to pay a similar price to free themselves from the apparatus of feudal repression they call a “government” and the parasite vermin who own and control it, it will be worth it. The alternative, for anyone who retains a shred of Humanity or a speck of honor and self-respect, is simply too horrible to contemplate, much less allow.

Remember Inna Kukuruza and George Floyd, and all those who have been murdered, and remember that those who murdered them will show you no more mercy whether you surrender or fight. And remember those who smashed the nazi war machine and those who overthrew the fascist state. Remember those in Cuba, Syria, Venezuela, Donbass and all over the world, who do not give up, who resist with their courage, blood and sacrifice. And understand, these were and are only ordinary people, human beings who simply decided that they would live and die as human beings, and come what may, they were ready to lose their lives, but never their Humanity.

Learn your history, and remember it, while you still can. There is a concerted war on reality, on truth and above all, on history, going on right now.  The truth of what happened just a few years ago is being erased and distorted and soon it will be flushed down the memory hole of the media and social media, to be lost forever. And if you think that is an exaggeration, try searching for “Inna Kukuruza Lugansk June 2, 2014” on Google or even Duck Duck Go. There are less links to that query than there were people murdered that day. Try the same search on Youtube, you will not find a single video out of the scores that were there only a year ago. Through deletion and search engine manipulations, the past is being stolen from right before your eyes, as you sit there and watch. Will you let them do the same to your future? If you do, they will.

The time is now, the swords are out and the lines are drawn. For years, I have been warning the forces of Justice and Freedom, of Humanity, that the longer you wait, the harder it will be when you do start fighting. It is now to the point that if you don’t start fighting now, then you have already surrendered. VICTORY OR DEATH. You have no other choice. The People of the Donbass People’s Republics have done it, and we still survive. You can do it too. Davai
deep stateDonbassukraineUSAWarWar Crimes
0 2,506
Share
Subscribe to our newsletter
Sign up here to get the latest news, updates and special offers delivered directly to your inbox.

When Putin is the Hope of Democracy