MOSSAD ATTACK? BEIRUT SUFFERS DEVASTATING 9/11-LEVEL TERRORIST ATTACK — Who did it and Why? 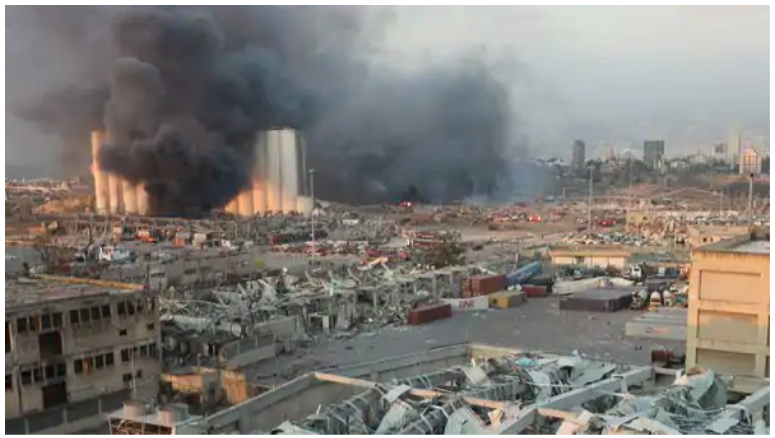 Smoke rises from the site of an explosion in Beirut, Lebanon August 4, 2020 (REUTERS)
Large

BEIRUT SUFFERS DEVASTATING 9/11-LEVEL TERRORIST ATTACK—Who did it and Why?

WHO? MOSSAD did it.

WHY? ISRAEL has repeatedly
threatened to remove Hezbollah
from Lebanon by any means necessary 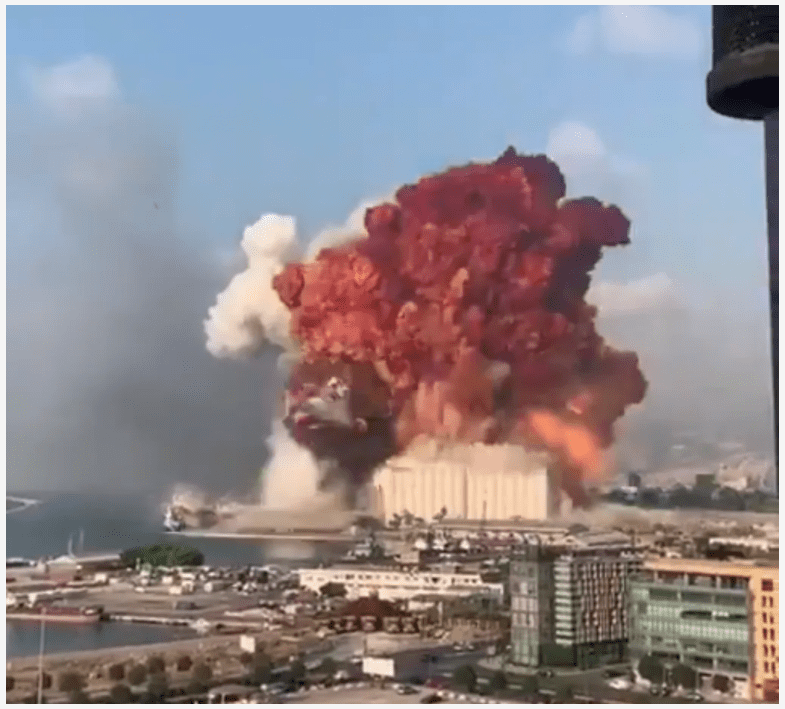 State of the Nation

Not one, but two enormous explosions rocked Beirut today.  When there are 2 bomb attacks, just like there were on 9/11, you know the terrorist attack has Israel’s fingerprints all over it. (See two explosions clouds in the photo below.) EDITORS NOTE: Graphic content / This picture taken on August 4, 2020 shows a general view of the scene of an explosion at the port of Lebanon’s capital Beirut. – Two huge explosions rocked the Lebanese capital Beirut, wounding dozens of people, shaking buildings and sending huge plumes of smoke billowing into the sky. Lebanese media carried images of people trapped under rubble, some bloodied, after the massive explosions, the cause of which was not immediately known. (Photo by STR / AFP)

What follows is a video of one of the immense explosion that occurred today, August 4th, at Beirut Port, Lebanon.

Now here’s another video perspective of the same explosion.

And here’s one more video:

This terrorist attack was predicted yesterday

SOTN was sent an email yesterday, Monday, August 3 — the day before this terrorist bombing — by an experienced Russian investigator and Israel research historian which stated the following:

“Attention: An Israeli citizen journalist recently
explained that Israel is ready to start a war with
two countries [Lebanon & Iran]. The Israeli military
is moving soldiers, tanks, etc.  Prime Minister Benjamin
Netanyahu is currently charged with three crimes,
and he can be jailed soon if found guilty. He wants
to start a new war, and instead of going to prison he
has hopes of becoming an Israeli hero messiah who
would exterminate Hezbollah and other ‘enemies’
of Israel.”

The same email also included the following 32-minute video that goes into great detail about what Israel has planned for the Middle East between now and the U.S. election.  This video presentation is an interview between two Russian speakers so a translation of the transcript in now being made.

As always, Israel’s MOSSAD conducted this 9/11-level bombing operation in such a way so they could plead plausible deniability to the world community of nations.  After all, the Zionists who control the Modern State of Israel have been directly responsible for every single major terrorist attack on planet Earth since September 11, 20o1 and before.  What follows is a definitive analysis of how MOSSAD executed the 9/11 terrorist attacks and cover-up.

INDISPUTABLE EVIDENCE CONFIRMS:
9/11 was both an “Inside Job” and “Mossad Job”

Now, posted just below is a tweet about a Lebanese official who is already suggesting that the cause of the explosion was ammonium nitrate.  The Zionist propagandists and prevaricators are always in motion within minutes of the crime spree being perpetrated.  While ammonium nitrate may very well be the explosive material, the true cause of the detonation is what really matters at crime scenes of such utter devastation this one in Beirut.

Clearly, the various photographs reveal a thermonuclear explosion that could only have been detonated to produce such an awesome effect via an expertly planned terrorist operation.  While ammonium nitrate may have been the primary explosive, the signatures of the initial detonation and mushroom explosion reflect a clear-cut thermonuclear blast.[1]  It’s also quite likely that DEWs (Directed Energy Weapons) were also employed to carry out these attacks.

Both the white dust cloud and fire red burst shown below reveal that a complex weapon system was utilized.  The evolution of the explosion from beginning to end also demonstrates that this black operation was carried out by highly professional, military-trained bomb experts. 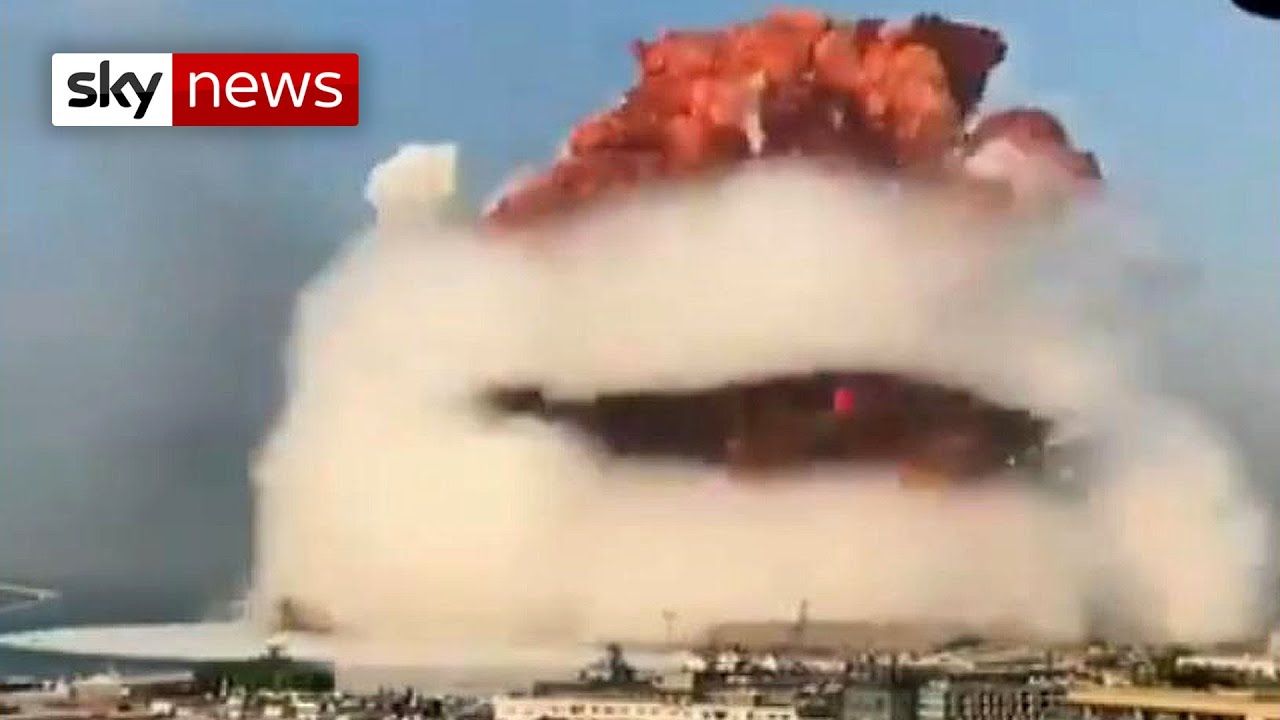 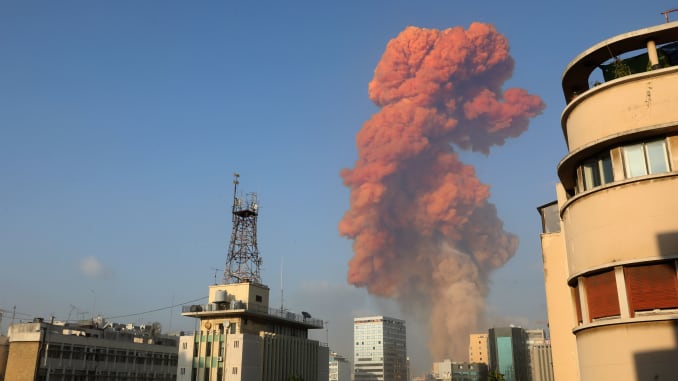 As for the extraordinary damage caused by this horrific terrorist attack, the photos below offer only a glimpse of what is taking place on the ground in Beirut at this very moment. 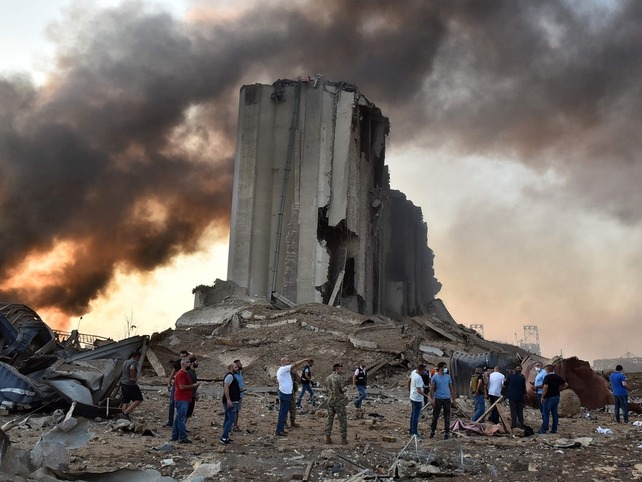 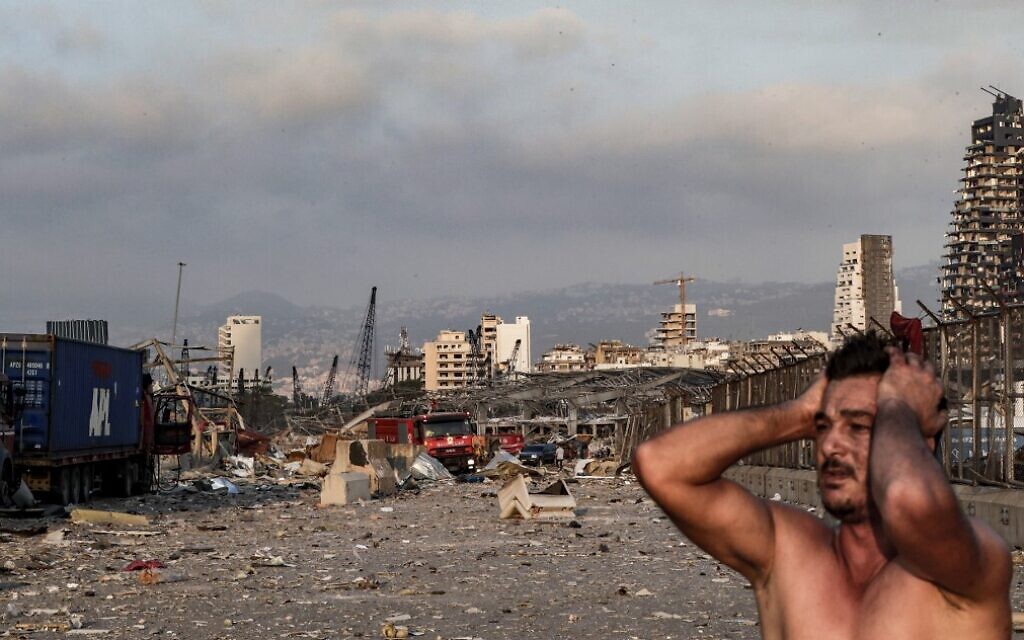 EDITORS NOTE: Graphic content / A man reacts at the scene of an explosion at the port in Lebanon’s capital Beirut on August 4, 2020. – Two huge explosions rocked the Lebanese capital Beirut, wounding dozens of people, shaking buildings and sending huge plumes of smoke billowing into the sky. Lebanese media carried images of people trapped under rubble, some bloodied, after the massive explosions, the cause of which was not immediately known. (Photo by IBRAHIM AMRO / AFP) 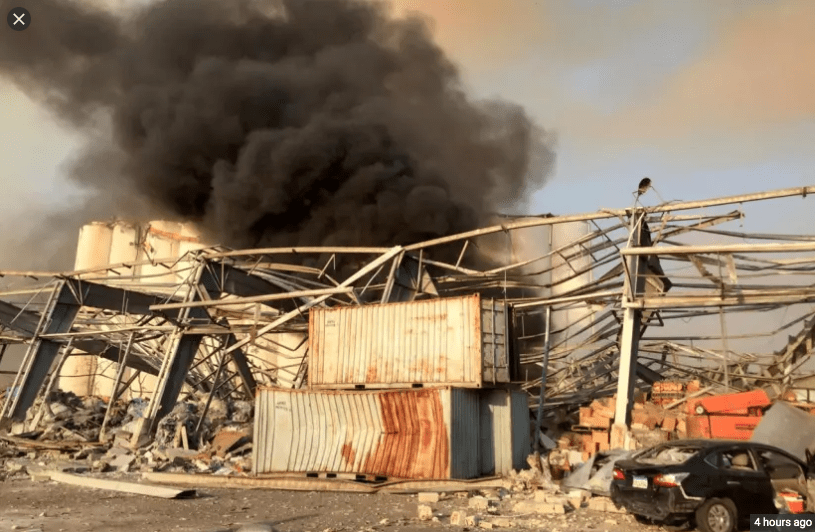 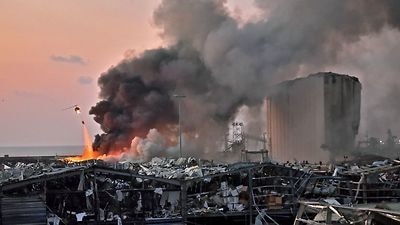 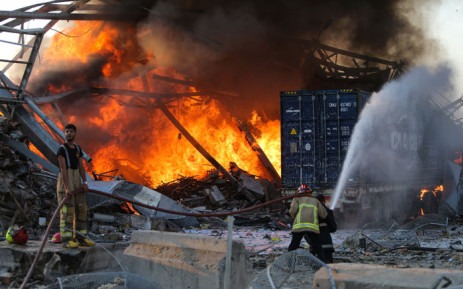 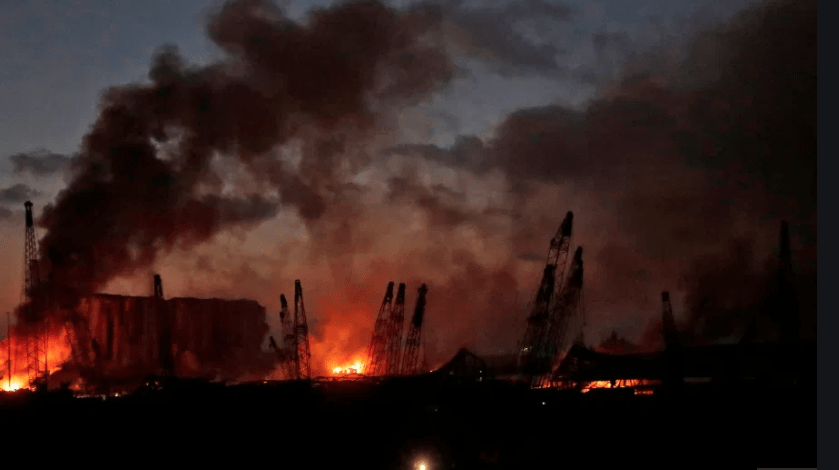 Just how much death and destruction?

The current statistics presented in the following Wikipedia entry will prove to be a fraction of the actual number of dead, injured and homeless in Beirut.  When the final tallies are confirmed, the death and destruction may very well be on par with the 9/11 terror attacks.

What better way to paralyze Hezbollah than to totally destroy the Port of Beirut.  How convenient it was that “approximately 2,750 tonnes (3,030 short tons) of ammonium nitrate that had been confiscated by the government from an abandoned ship and stored in the port without safety measures for the previous six years”[2].

Oh, really, we’re supposed to believe that this was just an accidental detonation of such a colossal amount of explosive material?!

As always, the official storyline fits the Zionist narrative that these were just accidental explosions … while at the same time the IDF is surreptitiously back-channeling the real back story throughout the Lebanese and Iranian Hezbollah networks.

KEY POINTS: The Neocon Zionists are masters of the geopolitical con.  The mere hint of nuclear bombs being detonated in Beirut will cause many to leave the city forever.  This is exactly the desired outcome so that there is substantially less support, both material and moral, offered by the Lebanese to the Hezbollah military network that has been firmly established from Beirut to the Israeli border.  Likewise, even prospective Hezbollah recruits will think twice before they enter a future war zone that the Israeli Defense Force will not hesitate to nuke.

MOSSAD executed this attack as a HUGE warning to Hezbollah not to threaten Israel with the hundreds of missiles that have been installed over years located not very far from Tel Aviv.

These attacks were also an outright threat directed at Iran.  If Israel is so reckless to blow up Beirut IN BROAD DAYLIGHT, they would be equally brash to carry out a similar black op in Tehran.  In point of fact, Iran has been the target of several suspicious fires and explosions over the past month.  Each of them has PM Benjamin Netanyahu’s fingerprints all over them.  Israel has been waging an unrelenting asymmetric terrorist war against Iran ever since President Trump took office.

Netanyahu is the Zio-Anglo-American Axis point man in the Middle East right now.  In fact, he has been indicted for three separate cases with the explicit purpose of coercing him to launch a full-scale attack on Iran.  But first Netanyahu’s hidden masters want him to neutralize Hezbollah in Lebanon; hence, the world has just witnessed this horrendous terrorist attack … against innocents who have nothing to do with Israel’s enemies.

Bottom Line: This type of terrorist operation is how the Zionist leaders of Israel always victimize innocent men, women and children to compel a targeted nation-state to give into their odious and/or insane demands. (Remember 9/11!)  However, it is never the people of Israel who are behind these never-ending atrocities; rather, it ‘s the Neocon Zionists who are strategically positioned throughout the Zio-Anglo-American Axis.  These perennial terrorists will stop at nothing until their cataclysmic Greater Israel project is completed.

Special Note: As always, highly dramatic terrorist attacks like this one are always timed to DISTRACT the entire planetary civilization from shocking major revelations.  The most radioactive disclosures being made over the past couple of weeks concern HCQgate—a deliberate Deep State-Big Pharma conspiracy to deprive the American people of the COVID-19 cure protocol known as Hydroxychlorquine~Azithromycin~Zinc. See: #HCQgate: Deep State-Big Pharma Anti-HCQ Conspiracy Blown Wide Open 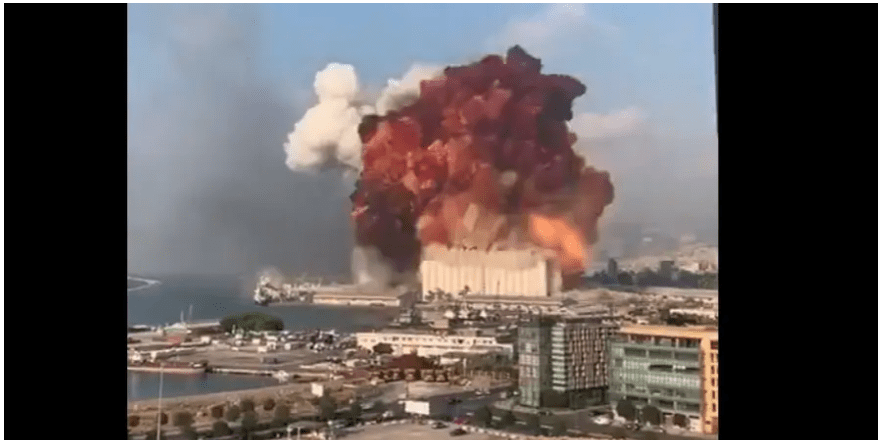 A screenshot of a video purportedly showing an explosion in Beirut, Lebanon. Screenshot/Twitter